This Baby Bird Was Trapped in Amber For 100 Million Years 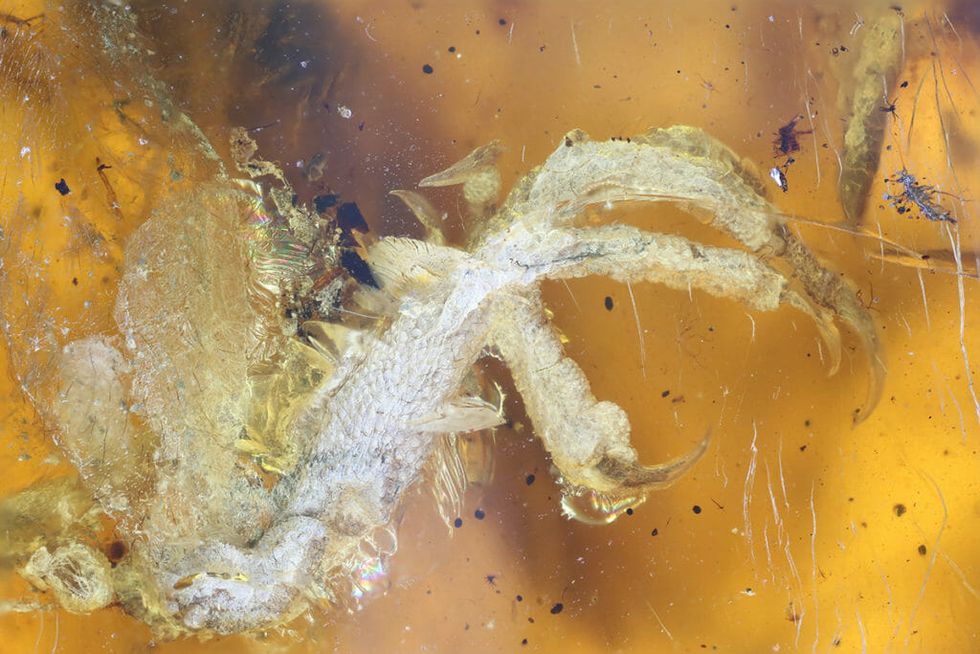 Millions of years ago, resin dripped from giant trees onto creatures roaming the forest floor. Today, these animals are frozen in amber. They give us hints about what life was like when dinosaurs roamed the earth.

While bits of ancient birds, insects, and even dinosaurs have been found fossilized in the past, these findings were typically minuscule, amounting to little more than pieces of scales or feathers. Now, a team of researchers has found a near-complete baby bird “immortalized” in a 100-million-year-old amber chunk, according to a study published in Gondwana Research. The scientists hope studying this piece of natural history will allow them to understand the ways modern-day birds differ from their prehistoric ancestors.

The amber dates to the mid-Cretaceous period and was found deep in the Hukawng Valley of Northern Myanmar. It contained a visible set of features, including a head, wing, feathers, and even a clawed foot, making it the “most complete and detailed view we’ve ever had” of this prehistoric bird. Based on the patterns formed in its feathers, the team thinks it was just a few days old when it was sealed forever in the sap.

The nearly 100-million-year-old feathers are tinted white, brown, and dark gray, leading the researchers to nickname the fossil “Belone,” the Burmese name for the similarly hued Oriental Skylark.

“Seeing something this complete is amazing. It’s just stunning, ” said researcher Ryan McKellar of the Canadian Royal Saskatchewan Museum. He and his fellow scientists used micro-CT scanning and 3D reconstruction to build up a better image of this rare and ancient specimen.

The team believes that the hatchling belonged to a group of birds known as enantiornithes which lived alongside our modern avian ancestors before dying out with the dinosaurs 66 million years ago. These birds likely resembled the ones seen today but had a slightly different joint system in their shoulders along with clawed wing-tips, and toothed jaws in place of beaks.

Previously found enantiornithine fossils suggest that these creatures hatched with a complete set of flight feathers, ready to fend for themselves and fly away from predators. This newly found fossil adds to this evidence - the hatchling had a full set of flight feathers and was even growing tail feathers at the time it was trapped in the sap.

Though it might look like the bird’s actual flesh is preserved in the amber, this is nothing more than a detailed impression of the animal, says McKellar. Studies investigating similar prehistoric finds have shown that the animal’s flesh is broken down into carbon and other minerals, leaving no DNA behind. That being said, the discovery of this little bird raises questions of what we know––and what is still left to know––about prehistoric wildlife.