The 6th Extinction: Is It Underway Already? 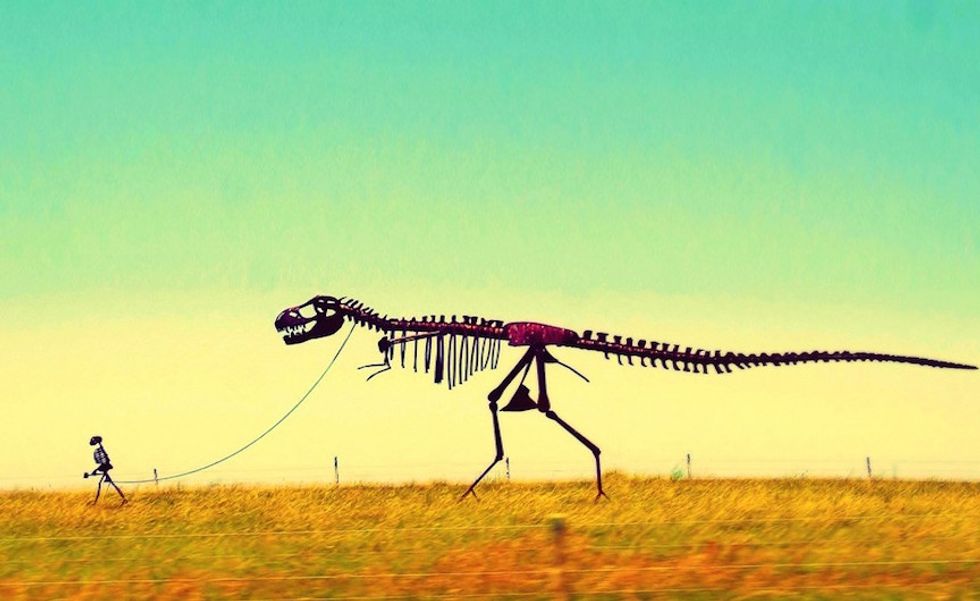 Do you remember the loggerhead turtle and the bonobo? That's a question our grandchildren may ask. Scientists expect to confirm a mass extinction — defined as a loss of 75% of species — over the next few centuries if current trends continue.

There have been five mass extinction events in Earth's history. In the worst, which occurred 250 million years ago and was caused by rising carbon dioxide levels, nearly all marine species and almost three quarters of all land species died off. The last mass extinctions occurred 66 million years ago, when a six-mile-wide asteroid is believed to have collided with Earth, wiping out the dinosaurs.

Due to past extinction events, of all the species that have ever populated Earth at some time over the past 3.5 billion years, more than 95% have vanished. The Sixth Extinction, more formally designated the Holocene extinction, describes the extinction event that is occurring during the present Holocene epoch (since around 10,000 BCE). A special analysis carried out by the journal Nature indicates that 41% of all amphibians on the planet now face extinction while 26% of mammals and 13% of birds are similarly threatened.

But the culprit involved this time is no cataclysmic event like an asteroid. It is, plain and simply, human behavior.

These days, we hear regular warnings of this or another animal or plant or organism whose days are numbered. The recently-reported death of one of the last six white rhinos left in the world pierced our complacency, if only for a moment. We may be growing inured to such news, as if under “natural selection,” creatures necessarily come and go.

Keeper Mohamed Doyo leans over to pat female northern white rhino Najin in her pen where she is being kept for observation at the Ol Pejeta Conservancy in Kenya. One of the last six in the world died in a San Diego safari park last December. Photograph: Ben Curtis/AP

Extinction is a relatively new idea. Well into the 18th century, people found it impossible to accept that nature could simply allow an entire species to disappear. If a species was no longer to be found in one location, it must still exist

elsewhere. “Such is the economy of nature,” argued Thomas Jefferson, “that no instance can be produced of her having permitted any one race of her animals to become extinct; or her having formed any link in her great work so weak as to be broken.”

When fossils of strange creatures – such as the mastodon – were first dug up, they were assumed to belong to creatures that still lived in other lands. Jefferson himself backed numerous expeditions—including the famed Lewis and Clark expedition in what is now thewestern portion of the United States—in the hopes of finding mastodons still roaming somewhere in America.

Then the French anatomist Georges Cuvier showed that the elephant-like remains of the mastodon were actually those of a lost species. “On the basis of a few scattered bones, Cuvier conceived of a whole new way of looking at life,” notes Elizabeth Kolbert in her book, The Sixth Extinction: An Unnatural History. “Species died out. This was not

an isolated but a widespread phenomenon.”

But we cannot dismiss that 18th century denial as merely magical thinking of a more naïve age. Despite evidence to the contrary, many today still resist the idea that humans could themselves have destroyed the “integrity of our planet’s ecology.” As Al Gore suggests in his New York Times review of Kolbert’s book, “There are psychological barriers to even imagining that what we love so much could be lost — could be destroyed forever. As a result, many of us refuse to contemplate it. Like an audience entertained by a magician, we allow ourselves to be deceived by those with a stake in persuading us to ignore reality.”

Jonathan Jones writes poignantly "the loss of a species is also a loss of the images, stories, symbols and wonders that we live by – to call it a cultural loss may sound too cerebral: what we lose when we lose animals is the very meaning of life."

What have we done?

We have already altered our landscape in irreversible ways. Brad Plumer of The Washington Post notes. “We've hunted animals like the great auk to extinction. We've cleared away broad swaths of rain forest. We've transported species from their natural habitats to new continents. We've pumped billions of tons of carbon-dioxide into the atmosphere and oceans, transforming the climate.”

The Great Auk, a flightless bird of the alcid family that became extinct in the mid-19th century. (John James Audubon)

“In the case of land extinctions, it is the spread of agriculture that has been the main driver,” explains Derek Tittensor, a marine ecologist at the World Conservation Monitoring Centre in Cambridge.“ By contrast it has been the over-exploitation of resources – overfishing – that has affected sealife.”

Rising global temperatures continue to destroy habitats and kill off yet more creatures.

Robin McKie, science writer for the Pulitzer Prize-winning publication The Guardian, observes that the change in climate has been triggered by increasing emissions of carbon dioxide, a gas that is also being dissolved in the oceans. “As a result,” she writes, “seas are becoming more and more acidic and hostile to sensitive habitats. A third of all coral reefs, which support more life forms than any other ecosystem on Earth, have already been lost in the last few decades and many marine experts believe all coral reefs could end up being wiped out before the end of the century."

Similarly, a quarter of all mammals, a fifth of all reptiles and a seventh of all birds are headed toward oblivion. And these losses are occurring all over the planet, from the South Pacific to the Arctic and from the deserts of Africa to mountaintops and valleys of the Himalayas.

To put this in even more sobering perspective, climatologist James Hansen points out that the man-made pollution already in the atmosphere traps as much extra heat energy every 24 hours as would be released by the explosion of

What have we lost already? A sobering inventory.

According to the Guardian article, “[h]umans began by wiping out mastodons and mammoths in prehistoric times. Then they moved on to the eradication of great auks, passenger pigeons – once the most abundant bird in North America – and the dodo in historical time. And finally, in recent times, we have been responsible for the disappearance of the golden toad, the thylacine – or Tasmanian tiger – and the Baiji river dolphin. Thousands more species are now under threat."

A Tasmanian tiger in captivity, circa 1930, shortly before the species became extinct. Photograph: Paul Popper/Popperfoto/Popperfoto/Getty Images

"Many species are already critically endangered and close to extinction, including the Sumatran elephant, Amur leopard and mountain gorilla. But also in danger of vanishing from the wild, it now appears, are animals that are currently rated as merely being endangered: bonobos, bluefin tuna and loggerhead turtles, for example.”

If that trend continues, it could lead to a mass extinction — defined as a loss of 75% of species — over the next few centuries.

Looking to the future, a dismal picture

The resulting rapid warming of both the atmosphere and the ocean is already wreaking havoc on Earth’s delicately balanced ecosystems. “By disrupting these systems,” Kolbert writes in her book, “we’re putting our own survival in danger.” If trends continue, she notes, the global temperature will keep rising, triggering “world-altering events.”

McKie asserts that the “finger of blame points directly at human activities. The continuing spread of agriculture destroys millions of … [wild habitat areas] every year, leaving animals without homes, while the introduction of invasive species, often helped by humans, is also devastating native populations. At the same time, pollution and overfishing are destroying marine ecosystems.”

Overfishing is a form of overexploitation where fish stocks are reduced to below acceptable levels. C. Ortiz Rojas

“Habitat destruction, pollution or overfishing either kills off wild creatures and plants or leaves them badly weakened,” said Tittensor. “The trouble is that in coming decades, the additional threat of worsening climate change will become more and more pronounced and could then kill off these survivors.”

Hunting, fishing and other forms of exploitation contribute to declines in animal populations, according to the WWF Living Plant Report 2014. Habitat degradation and loss are also dominant threats. Climate change is expected to become a bigger factor over time.

Gazing through a murky crystal ball

The effects of climate change are hard to forecast, but will almost assuredly accelerate extinctions in the coming years--and scientists cannot say for certain how. “There is a huge uncertainty in projecting future extinction rates,” says Henrique Pereira, an ecologist at the German Centre for Integrative Biodiversity Research in Leipzig. The Nature study suggests that “one simple way to project into the future would be to assume that the rate of extinction will be constant; it is currently estimated to range from 0.01% to 0.7% of all existing species a year.” The International Union

for Conservation of Nature (IUCN), in its [annual] version of its Red List of Threatened Species released in November, evaluated more than 76,000 species, a big increase over earlier editions. “But,” comments Richard Monastersky in Nature, “that is just 4% of the more than 1.7 million species that have been described by scientists, making it impossible to offer any reliable threat level for groups that have not been adequately assessed, such as fish, reptiles and insects.”

One approach is to create computer models that can forecast how human activities will alter ecosystems. These general ecosystem models, or GEMs, are still being developed and require immense amounts of data. A GEM built by Tittensor and his colleagues took over three years to program, in part because they sought needed to represent all organisms with body masses “ranging from 10 micrograms (about the weight of small plankton) to 150,000 kilograms (roughly the size of a blue whale).”

Tittensor has acknowledged that “[i]t needs a lot more development and testing, and ideally there will be a lot more variety of these models. But if they do a decent job of capturing the breadth of life in a computer, they have real potential to alert us to potential problems we wouldn’t otherwise detect.”

What Can We Do About It?

While conservation policies could slow extinctions, current trends give little comfort. “In general, the state of biodiversity is worsening, in many cases significantly,” says Derek Tittensor, a marine ecologist with the United Nations Environment Programme’s World Conservation Monitoring Centre in Cambridge, UK.

To add to these concerns, even appropriately-designated and protected conservation areas may be of “no use if not managed or governed properly,” says a frustrated James Hardcastle, a program development manager with the IUCN. Turning the notion of the IUCN's threatened species "red list" on its head, Hardcastle recently unveiled a “green list” that recognizes the world's best-managed protected areas which offer the most favorable conditions for flora and fauna.

Federico Montesino Pouzols, a bioinformatician at the Rutherford Appleton Laboratory in Harwell, UK, authored a study, published in Nature on December 14, asserting that protected areas have been compromised by “projected land use and parochialism.” He also pointed to ineffective outcomes being the result of “land-use change and uncoordinated actions between countries. Further, he stated, “international collaboration — such as the Green List — is essential to create effective protected areas.”

Choosing the doors we close

There is no time to lose. Inaction will prove a devastating Sophie's Choice. Kolbert delivers a sobering prophecy: “Right now, we are deciding, without quite meaning to, which evolutionary pathways will remain open and which will forever be closed. No other creature has ever managed this, and it will, unfortunately, be our most enduring legacy.”