Video of Donald Trump Awkwardly Wandering Off Stage at the G-20 Summit Is Going Viral and, Yep, He Did It Again 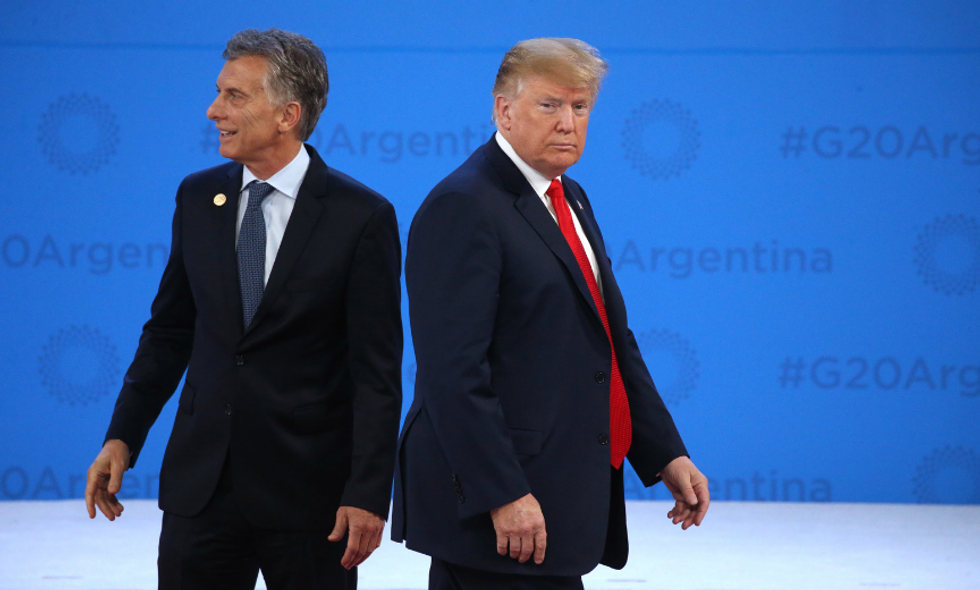 Donald Trump attended the G-20 Summit of world leaders in Argentina over the weekend, but despite Trump's claims that great progress has been made on important issues, the summit may be remembered for an awkward moment when Trump wandered off stage ahead of the summit's plenary meeting.

In a video going viral online, Trump can be seen on stage with summit host, Argentinian President Mauricio Macri. Trump turns to Macri, shakes his hand, and just wanders off stage leaving Macri to stand there alone with photographers looking on and laughing.

Watch the bizarre clip below:

The clip keeps giving and giving, as a staffer runs after Trump, and the president can be heard muttering "Get me out of here" off camera.

Bizarrely. this is not the first time the president has wandered away like this.

There was that time with President Netanyahu of Israel:

Or when he just almost wandered out of signing ceremony before signing the bill he was there to sign...

And whatever this was:

People don't know what to make of it, but mostly they're just flat out mocking the president.

And that staffer who chases after him...nice touch:

I love the guy who comes immediately after him. I am certain that this is his entire job: fetching Trump when he wa… https://t.co/wres4iaSff
— Thom Rutledge (@Thom Rutledge) 1543776565.0

To many, Trump is an embarrassment:

Another embarrassing moment on the world stage, reporters can be heard audibly laughing out loud at President Trump… https://t.co/qV0HcVgQVm
— Rula Jebreal (@Rula Jebreal) 1543716039.0