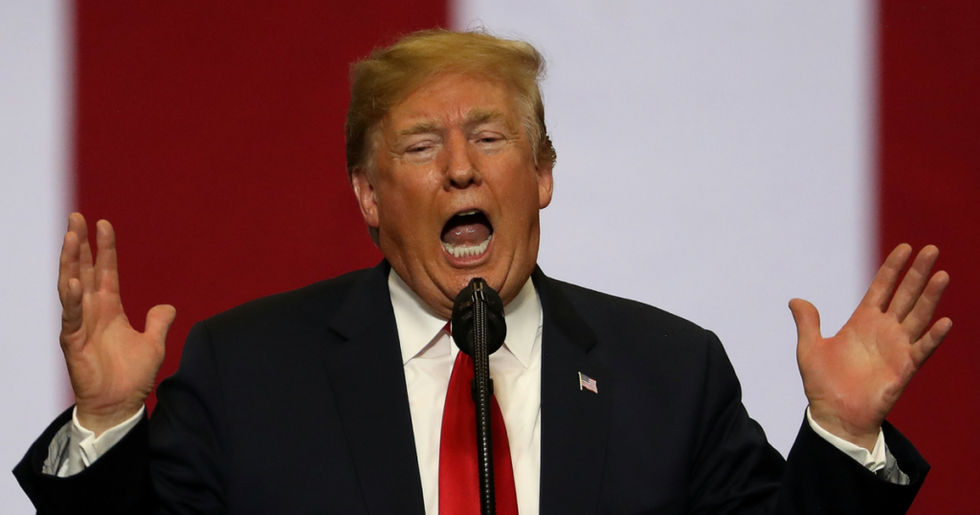 As a summit between Donald Trump and Vladimir Putin gets set for July 16 in Helsinki, Trump is once again giving Putin the benefit of the doubt on the issue of 2016 election meddling, even as he continues to demand an investigation into Hillary Clinton.

Early this morning, Trump tweeted that Russia "continues to say they had nothing to do with Meddling in our Election!"

"Where is the DNC Server, and why didn’t Shady James Comey and the now disgraced FBI agents take and closely examine it?" Trump wrote, again suggesting that it was Democrats who colluded with Russia, even though during the campaign, the Republican nominee literally asked Russia to hack the DNC.

"Why isn’t Hillary/Russia being looked at? So many questions, so much corruption!"

@realDonaldTrump So of course if Russia says there was NO collusion it must be do. Sure
— Jeffrey Mizel (@Jeffrey Mizel) 1530191900.0

Twitter immediately pounced on the president, whose abject denial of Russia election meddling is at odds with the unanimous conclusion of the intelligence community.

Not to mention the fact that Special Counsel Robert Mueller indicted 13 Russian nationals for their roles in attempting to "subvert the 2016 election and to support the Trump campaign."

The president seems willing to take the word of Putin over the conclusions of every single American intelligence agency, which all agree that Russia did, in fact, interfere with our election.

Trump has consistently referred to Mueller's investigation as a "witch hunt." As of last Saturday, Trump has called the probe a "witch hunt" 23 times in June alone.

Others noted Trump's alienation of our closest allies. At the G7 Summit in Canada earlier this month (yeah, it's only been three weeks), Trump berated some of the U.S.'s closest friends, telling leaders of G7 nations that they are trying to "rip us off on trade."

@realDonaldTrump “What’s wrong with being friends with Russia and China” you said during the elections. Then you m… https://t.co/TmRzvhHJPr
— Dan (@Dan) 1530186082.0

Trump also lamented Russia being kicked out of the former G8 for his 2014 annexation of Crimea, though the president has placed the blame solely on former President Obama.

On Thursday, it was announced that the two leaders will meet in Helsinki, Finland on July 16.

“It would look like we will probably be meeting in the not too distant future and I’ve said it from day one getting along with Russia and China and with everybody is a very good thing,” Trump said.

Secretary of State Mike Pompeo added that "the president is looking forward to an opportunity to find those handfuls of places where we can have productive conversations that lead to improvements for each of our two countries."

“I think we have our eyes wide open that that space is pretty small,” Pompeo said of potential sanctions relief on Russia. “They don’t share our values in the same way the European countries do. But I think the president is hopeful we can reduce the temperature and reduce the risk for America.”