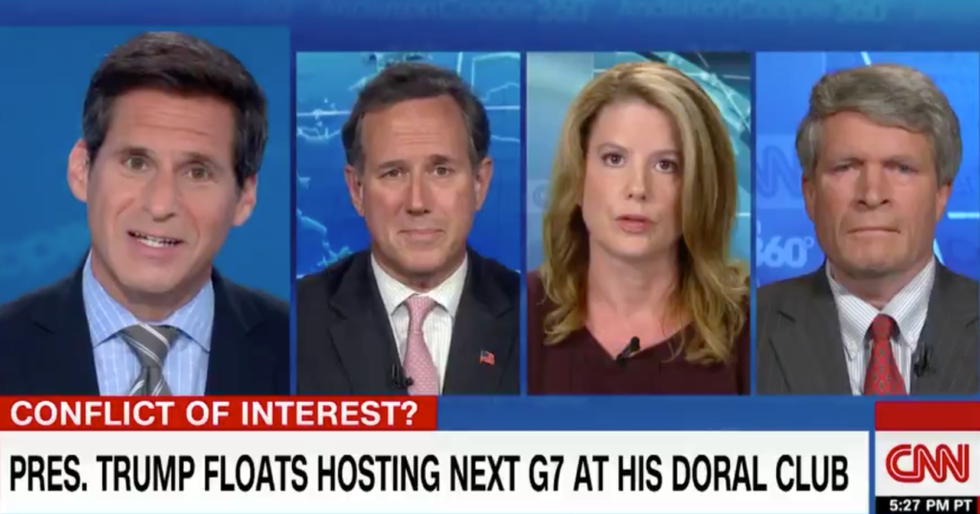 People were disturbed when President Donald Trump, at the G7 summit in France, called for next year's summit in the United States to be held in Miami, Florida—at his resort.

Citing the accommodations and its proximity to the airport, Trump suggested multiple times that the summit, which costs hundreds of millions of dollars, occur at the Trump National Doral Miami. This would be a clear violation of the Emoluments clause, which forbids a President from using his platform for profit.

Even the President's allies are calling him out for the idea, including former Republican Senator from Pennsylvania, Rick Santorum. While discussing the suggestion on CNN, anchor John Berman asked Santorum what he'd say if he were the President and someone floated the idea.

He then implored that the President let the idea go.

“He doesn’t do himself any good by doing things like this...Please, Mr. President. Stop. Please.”

Further through the segment, Santorum pointed out that Doral "isn't doing well." A representative for the resort recently attempted to ease its tax burden, citing a decline in business.

Watch some of Santorum's segment below:

Santorum, still a Republican, assured he doesn't believe that Trump is deliberately trying to make money off of the presidency, but that he's a natural promoter.

Trump continues to float the idea, despite widespread disapproval.