Donald Trump Just Retaliated Against Nancy Pelosi for Postponing His State of the Union With a Letter of His Own, and It's Petty AF 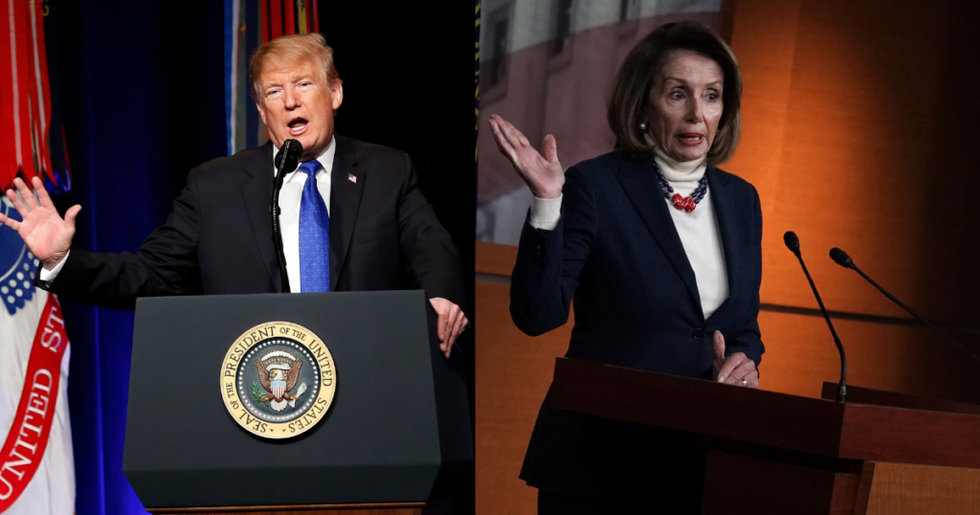 President Donald Trump on Thursday responded to House Speaker Nancy Pelosi's (D-CA) request to delay his State of the Union speech so long as the government remains shut down.

In a letter to Pelosi, Trump said he "postponed" an upcoming Congressional delegation to Afghanistan, Egypt, and Belgium, though he said Pelosi, a multi-millionaire, could still make the trip if she chooses to fly commercial. Pelosi was supposed to leave Thursday afternoon.

“We will reschedule this seven-day excursion when the shutdown is over,” Trump wrote. “I also feel that, during this period, it would be better if you were in Washington negotiating with me and joining the Strong Border Security movement to end the shutdown.”

The typo did not go unnoticed, and people doubt if Trump wrote the letter himself.

@jdawsey1 @ddale8 This was ghostwritten, notwithstanding the Widespread Superfluous Capitalization. The tell? "Sincerely" 🤥
— HarrietTSpy (@HarrietTSpy) 1547752706.0

Some think Trump's response shows that Pelosi is getting under his skin.

The pettiness is real, especially considering Trump has yet to visit troops in Afghanistan.

I’ve been confident that Pelosi is winning for a while. This letter from Trump just confirms it. https://t.co/wMewBL5MR3
— Adam Parkhomenko (@Adam Parkhomenko) 1547752871.0

If you thought this shutdown was close to being over, the House Speaker suggested the president cancel his address… https://t.co/WW7lRVGfuv
— Kaitlan Collins (@Kaitlan Collins) 1547753026.0

So is the hypocrisy.

One White House official said the president has the right to suspend military travel, which would normally provide security for the Speaker, during a shutdown.

A White House official says all congressional CoDels will be canceled during shutdown, not just those involving Pelosi.
— Noah Bierman (@Noah Bierman) 1547753454.0

“We approve all these congressional trips that use government or military planes,” the official said. “That’s not new or anything. That’s just how it has always worked.”

Trump's saber-rattling may be moot, however, because the House and Senate have already canceled next week's recess, meaning Pelosi and the rest of Congress will be in Washington to continue pressuring Trump to reopen the government.

Trump's third shutdown is now in its 27th day. None of this is normal.