Donald Trump Jr. Is Getting Shredded for His Take on Why Kim Jong Un Broke Precedent and Responded to a Question From a Reporter 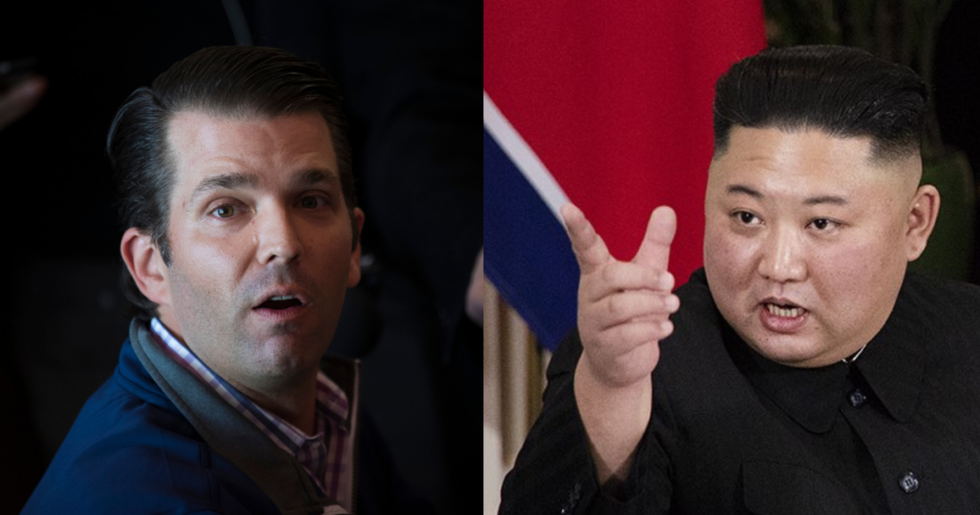 Donald Trump Jr., the prince of bad takes on Twitter, lived up to his reputation late Wednesday night as President Donald Trump's second denuclearization summit with dictator Kim Jong Un teetered on the brink of collapse.

In Don Jr.'s world, however, his father would return victorious from Hanoi, Vietnam.

Why? Because Kim answered a question by Washington Post reporter David Nakamura. It marked the first time ever that the North Korean dictator took an impromptu question from an American journalist, which caught the attention of many in the profession.

Nakamura asked Kim "if he felt confident he could get a deal" with Trump on a plan to rid the Korean peninsula of nuclear weapons.

"It’s too early to say," Kim replied. "I would not say I’m pessimistic.”

I asked Kim Jong Un if he felt confident he could get a deal with @realDonaldTrump. He replied: “It’s too early to… https://t.co/cUjHX0sQHV
— David Nakamura (@David Nakamura) 1551319582.0

Junior saw this as an opportunity to credit his father with having "accomplished more on the Korean Peninsula than all the “expert” bureaucrats before him did combined over the last 60 years." Considering his father's boorish treatment of the press, it seemed the achievement could be credited to the ingenuity of journalists rather than the President's diplomatic acumen.

Trump's team of negotiators decided on Wednesday that the whole verification aspect of North Korean denuclearization was not necessary, indicating that the talks would likely dissolve.

Sure enough, on Thursday morning, Trump - the self-described master dealmaker who boasted about falling in love with Kim - abruptly departed the Vietnamese capital in a stunning defeat.

Junior is living in fantasy land.

@DonaldJTrumpJr @realDonaldTrump He as accomplished nothing more than two photo ops. This is not the Art of the Dea… https://t.co/bvuT0aYrR4
— Thorsten (@Thorsten) 1551339276.0

@DonaldJTrumpJr @realDonaldTrump He conceded the most minimal of concessions required to make an actual advancement… https://t.co/i9D1gbxo2W
— Ryan Ritchie (@Ryan Ritchie) 1551327122.0

@DonaldJTrumpJr @realDonaldTrump And it appears he's been as successful a negotiator as he was a casino operator.… https://t.co/FeRPWXm8Dv
— William F Tulloch (@William F Tulloch) 1551346509.0

@DonaldJTrumpJr @realDonaldTrump If you mean photo ops with oppressive dictators without getting any real concessions then 💯
— Joe (@Joe) 1551329397.0

In a rare move, the president openly acknowledged his loss, even though he said after the first summit he would "find some kind of an excuse" about misjudging Kim.

“Sometimes you have to walk, and this was just one of those times,” Trump told reporters as he boarded Air Force One.

That Trump's second round of talks with Kim came crashing down should come as no surprise. Trump's foreign policy strategy has been based on his instincts, rather than facts or even a basic grasp of international geopolitics.

In addition, Trump believed he would be the exception to North Korea's decades-long record of playing the West.

“It exposed Trump’s over-reliance on personal relationships and it highlighted his tendency to badly under prepare,” said Richard N. Haass, president of the Council on Foreign Relations. Trump “weakened his own hand by brimming with optimism," Haass said. "It signaled that he wanted an agreement too much, which then, I expect, only increased Kim’s instinct to ask for too much."

Although the Hanoi summit was “a disaster for Trump personally and, for America, a diminution of our stature," said Evelyn Farkas, an Obama-era defense official, at least Trump "didn’t make a bad deal, and a lot of people feared he would.”

But Trump is not ready to throw in the towel just yet.

“This wasn’t a walk away like you get up and walk out,” Trump told reporters. “No, this was very friendly. We shook hands . . . There’s a warmth that we have and I hope that stays. I think it will. But we’re positioned to do something very special.”

Even in failure, Trump's praise for Kim, a ruthless autocrat whom the president labeled "my friend," continued unabashed.

“He’s quite a guy and quite a character,” Trump told reporters. “I think frankly we’ll be good friends with Chairman Kim and North Korea, and I think they have tremendous potential.”

Kim also expressed his desire to remain on good terms with Trump.

“There would be people welcoming, and people viewing our meeting with skepticism,” Kim said, “but there would also be people who would look at us spending a great time together, like a scene in a fantasy movie.”

But former special representative to North Korea Joseph Yun thinks Trump may finally have to come to terms with the fact that North Korea is never going to dismantle its nuclear program, despite his buddying up to Kim.

"Trump tried to be nice-nice. It’s a page out of his book, relying on one-on-one negotiations, face-to-face negotiations. But that’s doesn’t work, especially with North Koreans," Yun said. “Trump is beginning to realize that North Korea’s not going to completely denuclearize, not now and probably not ever.”

Tired of winning yet?