Rep. Ilhan Omar Just Had the Perfect Response After Trump's Rally Crowd Chanted 'Send Her Back' 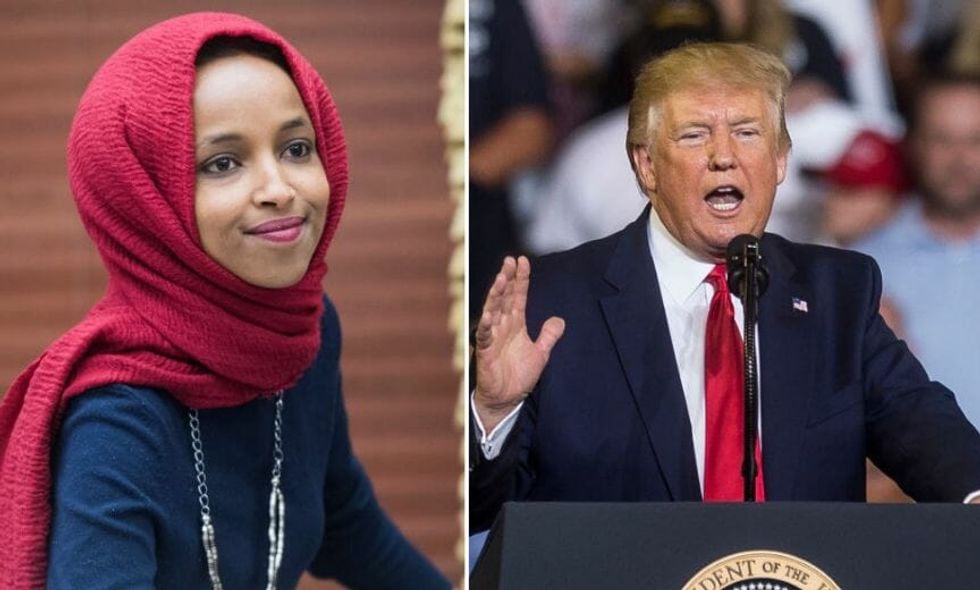 Many thought President Donald Trump's racism had reached a new low with tweets urging four Democratic congresswomen of color to "go back" to where they came from.

But at a North Carolina rally Wednesday night, the president and his supporters proved they still had greater depths to sink to. When Trump unleashed a slew of lies about Somalian-American Congresswoman Ilhan Omar (D-MN), the crowd broke into a chant that disturbed Americans across the country.

Congresswoman Omar, however, doesn't intend to cower to the rallying cries of racists.

She responded with a quote from Maya Angelou's seminal poem Still I Rise...

...Before making it clear that she won't be going anywhere.

Omar's supporters praised her strength and resolve in the face of bigotry.

@IlhanMN I seriously can’t believe how strong and fierce you are in the face of all this. Absolute inspiration. #IStandWithIlhan
— Darren Puscas (@Darren Puscas) 1563417996.0

Many Democratic lawmakers spoke out against Trump's eagerness to enable racists.

#IStandWithIlhan and am proud to work with her in Congress. Trump is stoking the most despicable and disturbing c… https://t.co/UrkYszUSvo
— Bernie Sanders (@Bernie Sanders) 1563420013.0

Even some of Trump's most prominent supporters—albeit weakly—criticized Trump for allowing the chant.

I deeply disagree with the extreme left & have been disgusted by their tone. I woke up today equally disgusted - ch… https://t.co/hlIxUraFva
— Adam Kinzinger (@Adam Kinzinger) 1563455793.0

Vile. Omar is awful. She is a radical anti-Semite with terrible views. She is also an American citizen and chanting… https://t.co/UbXjhRZc3C
— Ben Shapiro (@Ben Shapiro) 1563411772.0

Even Fox & Friends wouldn't endorse it.

With Trump so emboldened, it looks like the 2020 election may be even uglier than 2016.