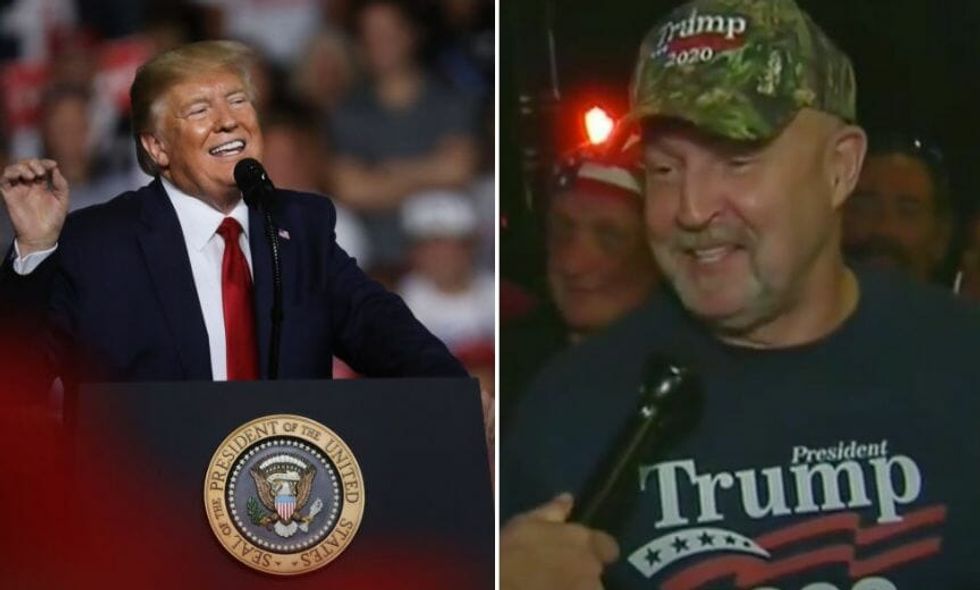 President Donald Trump is frequently described as a "counterpuncher," who retaliates against those who insult him with equal or greater force. But it turns out his response to a protester at his New Hampshire rally Thursday night was misdirected.

Trump insulting protesters is a sadly familiar sight, and Thursday night was no different. As the dissenters were being led out, Trump said of one of them:

But things aren't exactly as they seem.

The man Trump singled out in front of the crowd wasn't a protester at all, but actually a supporter named Frank Dawson. Dawson had begun waving his fist to get the president's attention before the president mistook him for a dissenter.

The real protesters were two women who brandished anti-Trump banners while yelling against the president's policies.

And how does Dawson feel about Trump fat-shaming him in front of over a thousand people?

The answer won't surprise you:

"Everything’s good! I love the guy! He’s the best thing that ever happened to this country."

Dawson spoke to Fox News after the incident: People found Dawson's response to be the perfect example of the loyalty the president's supporters shower him with.

Trump later called Dawson and left him a voicemail after learning that he was a supporter. According to Dawson, the president thanked him for his support and for coming to the rally. When asked if the president apologized for mocking his weight, Dawson responded:

"No, why would he apologize?"

It's not the first time one of Trump's supporters or officials has shown an unquestioning, sometimes unsettling level of adoration.

Trump has built a cult of personality around him. Remember his sycophantic cabinet meetings? It's not as extreme as… https://t.co/6MV9cf5kM1
— Brian Klaas (@Brian Klaas) 1564753621.0

Trump's approval rating has never dropped below 35 percent. Many attribute this to the unsettling devotion of Trump's supporters, whose minds no amount of banality or hostility from the president will seem to change.

Trump acknowledged their devotion on the campaign trail with an infamous quote.

"I could stand in the middle of 5th Avenue and shoot somebody and I wouldn't lose voters."

It gets truer every day.

Cult expert and mental health counselor Steven Hassan will soon release a book, The Cult of Trump, examining the unyielding devotion of the president's supporters.

You can pre-order The Cult of Trump here.