Donald Trump Sent the Most Awkward 'Merry Christmas' Message, and People Are Mocking Him Hard 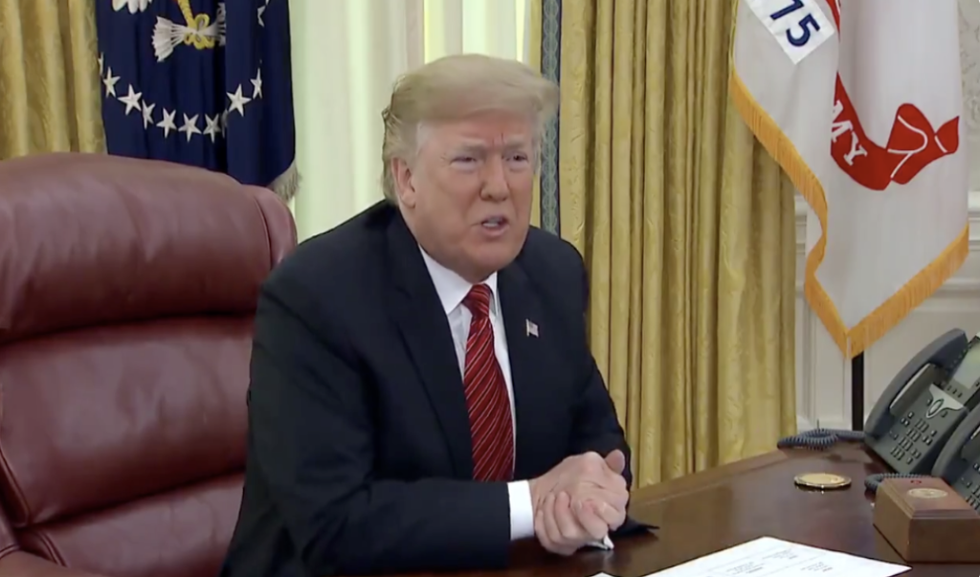 President Donald Trump on Tuesday wished the nation 'Merry Christmas' by babbling through his list of grievances that included how he sees the state of the country.

Sitting at the Resolute Desk in the Oval Office, Trump's melancholy mood was on full display.

Trump warned Democrats that it would be "presidential harassment" if they use their House majority to investigate his businesses and foreign ties.

Trump doubled-down on his frustration with Special Counsel Robert Mueller and the Russia investigation. "There's been no collusion, after two years," Trump insisted.

"You're talking about millions and millions and millions of dollars of wasted money," Trump said, falsely, before deflecting. "There's been absolutely no collusion. But there has been a lot of collusion by the Democrats, with Russia and a lot of other people that maybe they shouldn't have been dealing with, including very dishonest people."

The president also defended his May 2017 firing of FBI Director James Comey, which is the reason Mueller was appointed in the first place.

"It's a disgrace, what's happening in our country," the president whined. "But other than that, I wish everybody a very merry Christmas."

President Trump in the Oval Office after discussing the partial government shutdown, the border wall and the Fed Re… https://t.co/d6zF7IGxCl
— MSNBC (@MSNBC) 1545754195.0

@david_kasperek @arlenparsa I thought he couldn't sink any lower than the Santa exchange with the 7-year-old. But… https://t.co/XPX0SM6eOK
— Julie Laumann (@Julie Laumann) 1545755086.0

Five days into the third government shutdown of his presidency, Trump is totally tone deaf.

Trump is who he is.

@arlenparsa I imagine he’s like this with everyone. “Jon Tester is a disgrace and is an awful human being. Anyway… https://t.co/RsDMYNjlZ7
— Casey de Fremery (@Casey de Fremery) 1545756544.0

Trump is incapable of joy.

@arlenparsa I imagine he’s like this with everyone. “Jon Tester is a disgrace and is an awful human being. Anyway… https://t.co/RsDMYNjlZ7
— Casey de Fremery (@Casey de Fremery) 1545756544.0

Who else but Trump...