Turns Out the Latest 'Straight Pride Parade' Is About Way More Than Just Heterosexuality, and No One Is Surprised 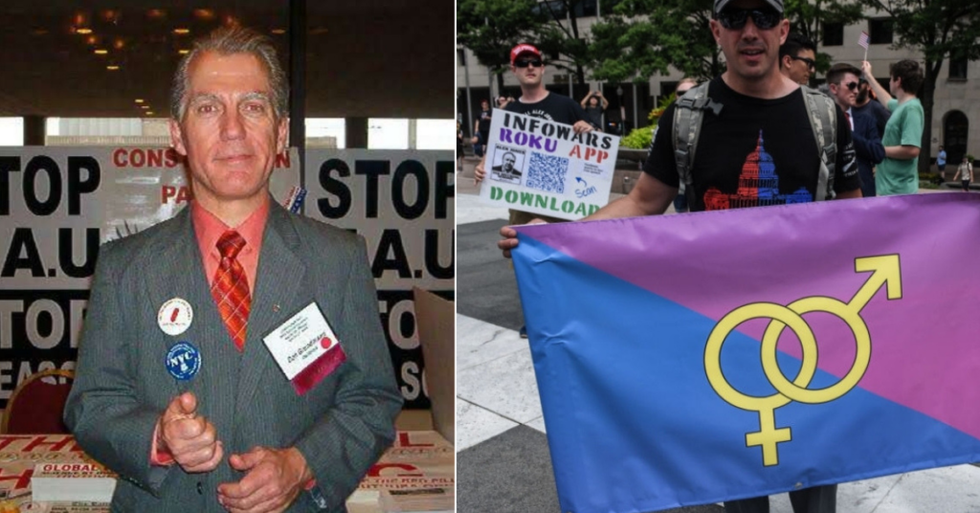 Grundmann's event is named Stanislaus County Straight Pride Parade/Event. It will celebrate "whiteness" and "Western civilization" as well as counter the "cultural attack" by LGBTQ people on the United States.

"Heterosexuality – the natural biological foundation for human life and its continuance and the ground upon which all civilization is built; the supremacy of the Natural Nuclear Family of man, woman, and children: the unquestionable superior method - structure - institution by which to raise children who are, 'normal, natural, healthy, sane';

"Western Civilization - (“the West is the Best”) – the Christian religion based social, cultural, and national cornerstone upon which the mass majority of all progress of humanity; i.e.; the modern world; has been built;"

"Whiteness/Caucasian – the mass majority biological racial component of the developers of western civilization;"

"Christianity – the religious foundation of the formation, development, and advancement of Western Civilization;"

Grundmann is approaching his Straight Pride parade and rally with the same level of subtlety.

He stated to Buzzfeed News his event will celebrate masculinity, femininity, “the natural family of man, woman, and children,” babies, “Western civilization,” Christianity, and “whiteness.”

He summarized it as:

"A celebration of life is just a celebration of natural functions of heterosexuality which are under attack actually, culturally in our society. All those things we are defending and celebrating and that makes up the core of our beliefs.”

In regard to the LGBTQ movement for equality, Grundmann said:

"It is a massive multibillion-dollar social engineering movement to destroy the foundations of our culture, a 24/7 psychological war against the appearance of conscience."

The Modesto Progressive Democrats shared the news of the planned Straight Pride event on their Facebook page.

The people of Modesto were not OK with the event planned for their city.

But the organization made their intention clear to show up for a counter protest.

Unfortunately, Grundmann has also been sending out invitations for his Straight Christian White Supremacy Pride event.

"Any Proud Boy who wants to come is welcome to come. We support everything that they’re doing."

Grundmann's ultimate goal is a straight pride chapter in every state.

A look at Grundmann's Senate campaign website from 2016 gives insight into his views. The website is titled "fight the power" with the logo of a raised White fist.

The chiropractor from California shared numerous conspiracy theories and links to websites where people could learn "the truth" as part of his Senate campaign.

In addition, Grundmann posted his own self written articles like:

"From a White Guy to Black Americans-You Are Chumps"

"They Are Attacking the Children"

"The Death of America: the Degeneration and End of Masculinity"

For groups that have held power, whether they are a physical majority or not, others gaining the rights they've always had can feel like an attack or oppression. US history is filled with violent backlash against equality for women and racial, ethnic and religious minorities.

Jim Crow segregation laws,  the women's  rights and civil rights movements were not long enough ago that some people, like 67 year-old Grundmann do not long for a past reality or a desire to Make America Great Again. The MAGA slogan, used heavily by the Ku Klux Klan in early to mid-20th century recruitment efforts saw a resurgence in recent years.

Grundmann's honesty about his motives—unlike those in Boston or other parts of the nation—at least lets people know it's not about straight pride. It's about the right to racism and bigotry upheld by civil laws like DOMA and Jim Crow.

Attending an event like Grundmann's? This shirt, available here, is the perfect accessory.