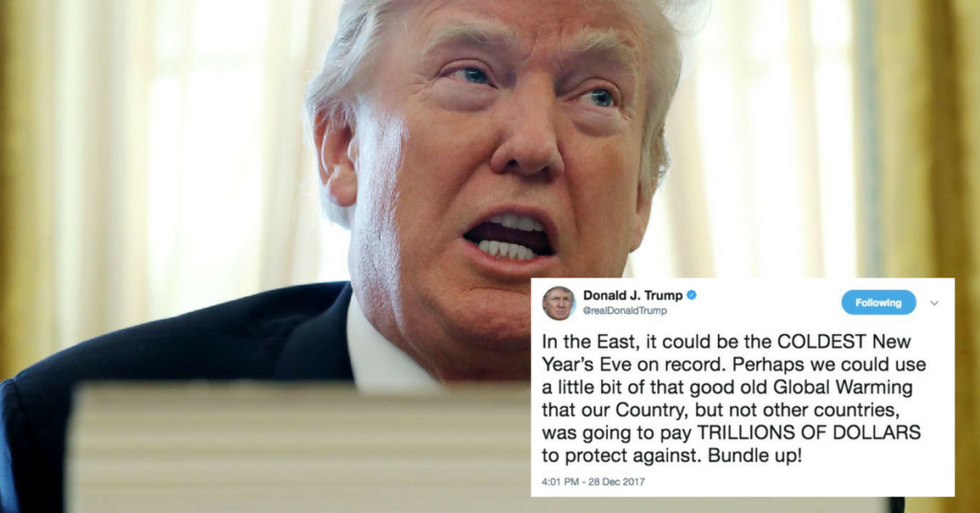 Representative Don Beyer (D-VA) criticized President Donald Trump after he mocked the science behind climate change in a tweet that claimed the East Coast "could use a little bit of that good old Global Warming" as it contends with record-breaking frigid temperatures this weekend.

Beyer slammed Trump for not listening to the advice from experts who understand the grave threat climate change poses to the planet.

"1: This isn’t how climate change works," Beyer tweeted. "2: We weren’t paying trillions of dollars. You didn’t understand the Paris Agreement in June and you still don’t," he tweeted.

He continued: "3: Climate Change is real. It is a serious threat to our children. You need people on your team who can explain this to you."

“Instead of tweeting like a child who hates science class, if you're so worried about the cold you could always send your 45M+ followers info about how to find shelter, prevent hypothermia & frost bite, prevent pipes from freezing, protect their pets, etc,” Rice tweeted. She added: “Not even to mention the fact that you are in Florida. At your country club. Where you played golf today. Again. There are people all over America who will sleep outside tonight because they have no warm place to go.”

Instead of tweeting like a child who hates science class, if you're so worried about the cold you could always send… https://t.co/oxvhOQ4XEu
— Kathleen Rice (@Kathleen Rice) 1514507734.0

Not even to mention the fact that you are in Florida. At your country club. Where you played golf today. Again. The… https://t.co/UAoKi9MUMt
— Kathleen Rice (@Kathleen Rice) 1514508110.0

Even former Jersey Shore cast member Vinny Guadagnino chimed in, telling the president that "climate change is more complex than global warming will make it hotter":

@realDonaldTrump I think climate change is more complex than global warming will make it hotter. It has to do with… https://t.co/0puuKuILaG
— Vinny Guadagnino (@Vinny Guadagnino) 1514506390.0

After social media users mocked him for his response to Trump, Guadagnino asked, “why does having a summer shore house automatically make [you] stupid?”

Per my last tweet about global warming and ppl saying it’s bad when someone from “jersey shore” educates the presid… https://t.co/JaF52dCaHh
— Vinny Guadagnino (@Vinny Guadagnino) 1514521643.0

The president has often placed himself at odds with the scientific community; a noted climate change denier, he has claimed that global warming is a hoax perpetrated by the Chinese.

In June, Trump became the subject of intense backlash after announcing he would withdraw the United States from the Paris Accord. Trump’s decision to exit from the agreement, which aims to reduce greenhouse gases and stem the effects of climate change, has drawn international condemnation from world leaders and environmentalists alike who predict it could damage U.S. international standing on environmental concerns.

Last November, Los Angeles Mayor Eric Garcetti last November rallied 71 U.S. mayors, whose cities are homes to tens of millions of people, to sign an open letter calling on Donald Trump, then the president-elect, to honor the Paris Accord. Once the president prepared to trigger an exit from the agreement, they––a list which includes the mayors of New York, Los Angeles, Chicago, Houston, Philadelphia, and Phoenix––have doubled down on their pledge to “forge ahead even in the absence of federal support.”

Macron also issued a call to American researchers and scientists, encouraging them to work with like-minded people abroad, assuring them that France will “put forward a concrete action plan to increase its attractiveness for researchers and companies in the ecological-transition sector and will take initiatives notably in Europe and Africa” on the subject of climate change. The French government has already started to award scientists grants to continue their climate change research.

A piece written by Victoria Herrmann, the managing director of the Arctic Institute and a National Geographic explorer, for The Guardian in March made the rounds again shortly after the president's ill-advised tweet made national headlines. In it, Herrmann slams the president for deleting citations on climate change in Arctic regions from government websites:

At first, the distress flare of lost data came as a surge of defunct links on 21 January. The US National Strategy for the Arctic, the Implementation Plan for the Strategy, and the report on our progress all gone within a matter of minutes. As I watched more and more links turned red, I frantically combed the internet for archived versions of our country’s most important polar policies.

I had no idea then that this disappearing act had just begun.

Since January, the surge has transformed into a slow, incessant march of deleting datasets, webpages and policies about the Arctic. I now come to expect a weekly email request to replace invalid citations, hoping that someone had the foresight to download statistics about Arctic permafrost thaw or renewable energy in advance of the purge...

n a remote region where data is already scarce, we need publicly available government guidance and records now more than ever before. It is hard enough for modern Arctic researchers to perform experiments and collect data to fill the gaps left by historic scientific expeditions. While working in one of the most physically demanding environments on the planet, we don’t have time to fill new data gaps created by political malice.