The Dead Sea Scrolls Were Buried With the Bones of Celibate Men -- Who Might Have Written Them! 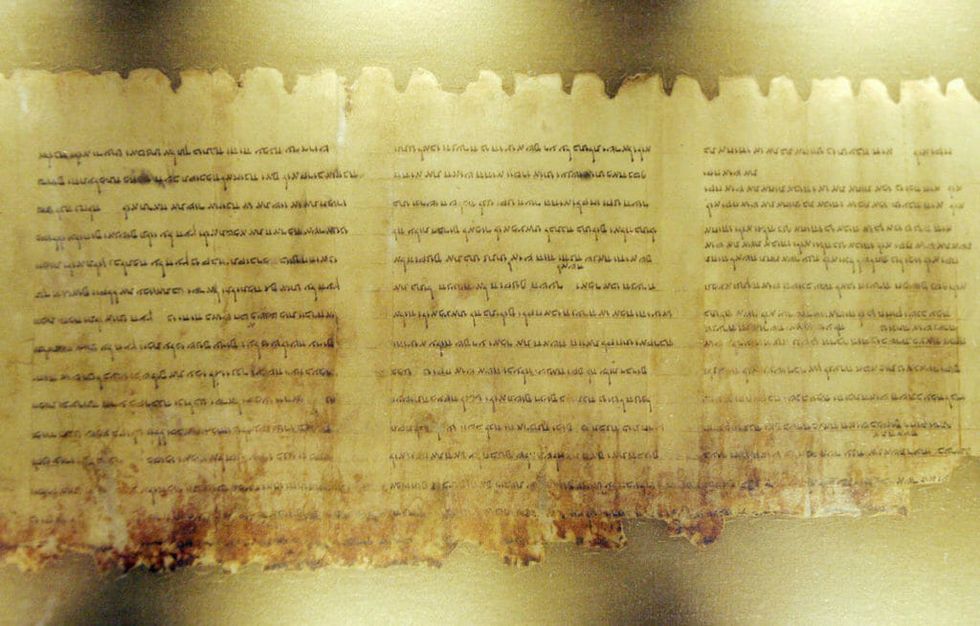 The Dead Sea "Temple Scroll," shown outside Israel for the first time in Berlin, is one of the longest biblical texts found since the 1940s. Credit: MICHAEL KAPPELER/AFP/Getty Images

Ever since the Dead Sea Scrolls were discovered 70 years ago in the Qumran Caves, located in the Judaean Desert of the West Bank, the ancient manuscripts have fascinated scholars and historians with the mysteries of their origins, and their authors. Long have they debated the identity of the scrolls’ guardians, who once occupied the region where the caves were found. Now an exhumation of 33 skeletons at the West Bank site, Qumran, has begun to lift the shroud, providing answers to some of these questions, while raising new ones.

The Dead Sea Scrolls, also known as the Qumran Caves Scrolls, were discovered between 1947 and 1956 in 11 caves at the Qumran site. While some of the scrolls survived intact, most of them consist of thousands of fragile parchment and papyrus fragments dating from the third century BCE to the first century of the Common Era. These found manuscripts contain literature of religious and historical significance because they include pieces of the Hebrew Bible.

The collective scrolls include the second-oldest known surviving texts -- about 230 biblical fragments in total -- that were later incorporated into the Hebrew Bible, also known as the Written Torah and the Old Testament. This makes the scrolls one of the most important archaeological finds of the 20th century.

They were first discovered by shepherds in the Qumran Caves, in a region that runs along the northwestern shore of the Dead Sea. It took a decade for researchers and archaeologists to assemble the scrolls, many of them older than 2,000 years into a collection of 981 manuscripts.

Ever since the discovery, speculation as to their caretakers has ranged from soldiers, craftsmen, nomadic Arabs, and an ancient Jewish sect known as the Essenes. Previous investigations of the Qumran site suggested it was founded more than 2,700 years ago. Now an analysis of the newly excavated skeletons of people buried at the site, found last year, supports the view that the community consisted of a religious sect of celibate men who lived 2,200 years ago.

Radiocarbon dating indicates the owners of the bones as alive during the time when the Dead Sea Scrolls were written and placed inside the caves. The bones of the interred bodies are around 2,200 years old, and the large majority of the ancient texts are estimated to have been written between 150 BCE and 70 Common Era.

But more fascinating is the gender and age of the bones, which suggest these people could possibly be the authors themselves. Yossi Nagar, an anthropologist with the Israel Antiquities Authority in Jerusalem who helped the researchers with their analysis of the skeletons, spoke with Science News:

“I don’t know if these were the people who produced the Qumran region’s Dead Sea Scrolls,” Nagar said. “But the high concentration of adult males of various ages buried at Qumran is similar to what has been found at cemeteries connected to Byzantine monasteries.” The Byzantine Empire, founded in A.D. 330, was an extension of the Roman Empire in the eastern Mediterranean.

Of the 33 skeletons found, at least 30 were identified as being probably or definitely men, based on pelvic shape and body size. In addition, reexamination of 53 previously unearthed human skeletons from Qumran’s cemetery found that six of seven individuals formerly tagged as women were actually men. The remains of a few children have also been excavated.

The near exclusion of female remains lends credence to the theory that the enigmatic Essenes, who were celibate Jewish men, populated Qumran at the time the scrolls were buried. Furthermore, the radiocarbon dating highly suggests they either wrote (in Hebrew, Aramaic, and Greek) the manuscripts themselves, or served as their custodians.

The men died between the ages of 20 and 50 years old, and examination of their bones has found no signs of war-related injuries -- this discredits the theory that Qumran is a cemetery for soldiers. In a paper published by the researchers, Nagar states it is far more likely that the absence of women among the burials means the men lived out a monastic existence: "Community of ideologically celibate men… child proportion and adult age at death distribution match the common desert monasteric societies of the subsequent periods.”

The question remains, though, if these men were the authors of significant biblical texts that have shaped the course of history, or if they were merely caretakers.

The findings were presented last month at the annual meeting of the American Schools of Oriental Research in Boston, Massachusetts.