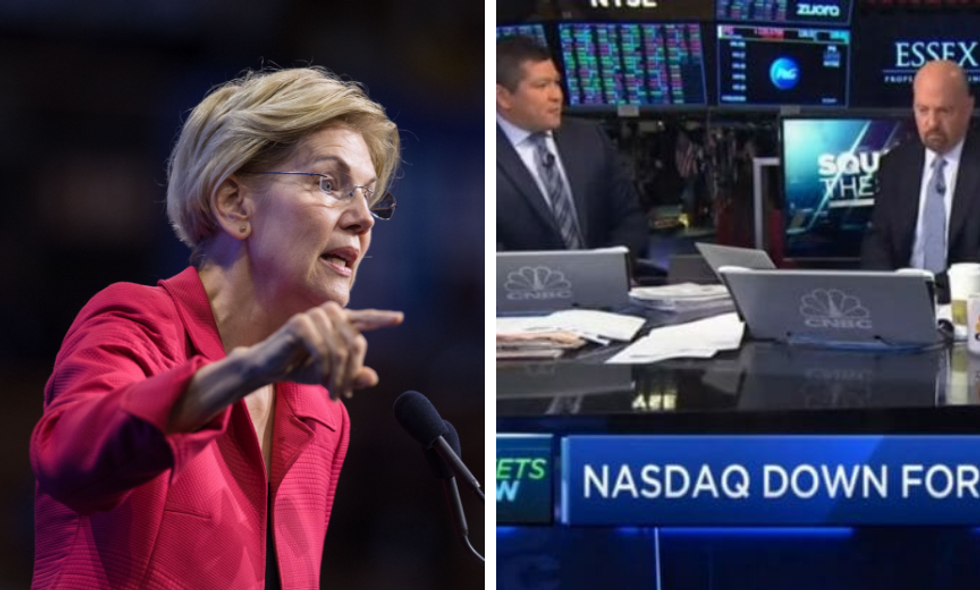 Video footage of a CNBC panel discussing banking and a certain 2020 presidential candidate made waves on social media.

When it comes to average voters, a big bank CEO's opposition to a candidate is often more beneficial than the CEO's endorsement.

TV Personality and financial commentator Jim Cramer spoke with other financial experts on the panel and they agreed unanimously, Big Banks want anyone but Senator Elizabeth Warren (D-MA).

Cramer called Warren “a champion of the left wing for her bank-bashing and wealth-taxing proposals," and he's got a point. In a Senate hearing, Warren once told an infuriated Wells Fargo CEO to his face that he should be fired. Policy-wise, she's called for a wealth tax and for greater restrictions on Wall Street.

Warren wrote in a Medium essay:

“To raise wages, help small businesses, and spur economic growth, we need to shut down the Wall Street giveaways and rein in the financial industry so it stops sucking money out of the rest of the economy.”

Considering the often predatory greed of big bank CEOs and giant corporations, that lack of endorsement was viewed as a positive rather than a negative.

It was even suggested Warren could use the comments as a campaign ad.

@jbouie Between this and "nevertheless she persisted" I'm marveling at how Warren provokes her enemies into giving her good media.
— Nied (@Nied) 1568140111.0

@jbouie This is a profound endorsement of Warren's effectiveness. The campaign has to put this their advertising.
— Al Cohen (@Al Cohen) 1568141297.0

@jbouie @AJentleson I need this on a loop. Watching rich men talk about the squirming of richer men at the prospect… https://t.co/ZbinYaWZQ7
— William Scot Grey (@William Scot Grey) 1568141359.0

Senator Elizabeth Warren's book This Fight Is Our Fight: The Battle to Save America's Middle Class is available here.