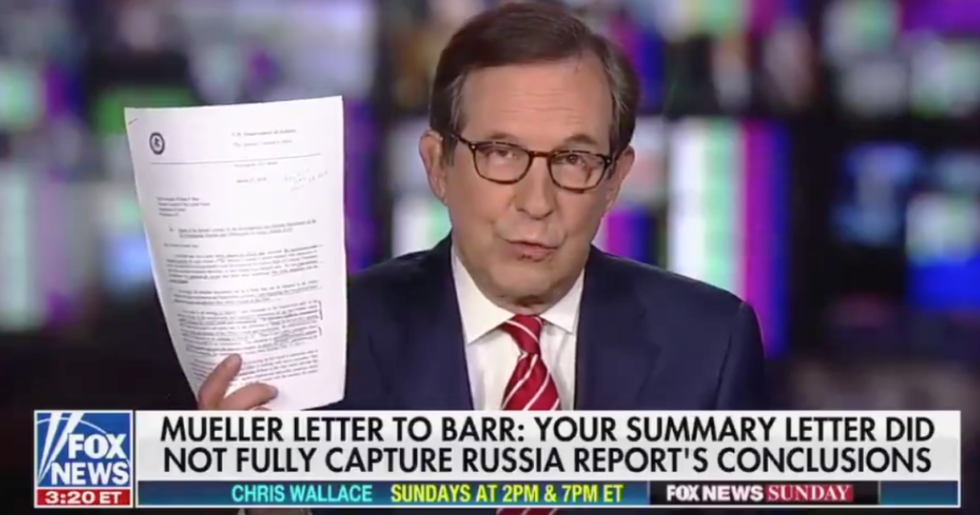 If you felt a disturbance in the Force on Wednesday it was probably when Fox News host Chris Wallace realized that his network may not be the "fair and balanced" arbiter of news it claims to be.

Specifically, Wallace knocked his own colleagues for their biased coverage of Special Counsel Robert Mueller's stunning letter to Attorney General William Barr, though he stopped short of naming names.

“I know there are some people who don’t think this March 27 letter is a big deal," Wallace said in an appearance on Shepard Smith Reporting. "Some opinion people, some opinion people who appear on this network, who may be pushing a political agenda.”

Fox News' Chris Wallace: Some opinion people who appear on this network who might be pushing a political agenda don… https://t.co/rftoQsbRhP
— Lis Power (@Lis Power) 1556739023.0

Wallace urged his viewers to focus on the "facts," not the spin.

Mueller in his letter “expressed a frustration over the lack of context” to Barr’s summary of Russian election interference, contacts between Russians and members of President Donald Trump’s campaign, and Trump’s efforts to sabotage the investigation.

Barr’s four-page memo to Congress was fuzzy, Mueller wrote, because it downplayed the significance of the evidence Mueller collected, specifically on whether Trump obstructed justice.

“The summary letter the Department sent to Congress and released to the public late in the afternoon of March 24 did not fully capture the context, nature, and substance of this office’s work and conclusions,” Mueller said.

“What he says in the letter is, ‘You didn’t reflect what we found in the report,’ and there were a lot of people—having read now the full report, or as much as it has not been redacted—agree that he didn’t reveal what was fully in the report," he said.

“Again, those aren’t opinions, that’s not a political agenda, those are the facts.”

Indeed they are, but as Lis Power from Media Matters pointed out, Fox has a way of deliberately confusing people.

Bill Hemmer has done it:

Laura Ingraham certainly does it:

So has Martha McCallum:

Even guests, like Andy McCarthy, seek out ways to distort reality.

That is what made Wallace's moment of clarity a whiff of fresh air, albeit a small one.

@LisPower1 @kasie Besides Chris Wallace and Shep Smith, there really isn't any reason to deal with Faux and Comrades.
— Hereformaga (@Hereformaga) 1556750754.0

On Wednesday morning, the pro-Trump trio of Fox & Friends sided with Barr, despite Mueller's misgivings.