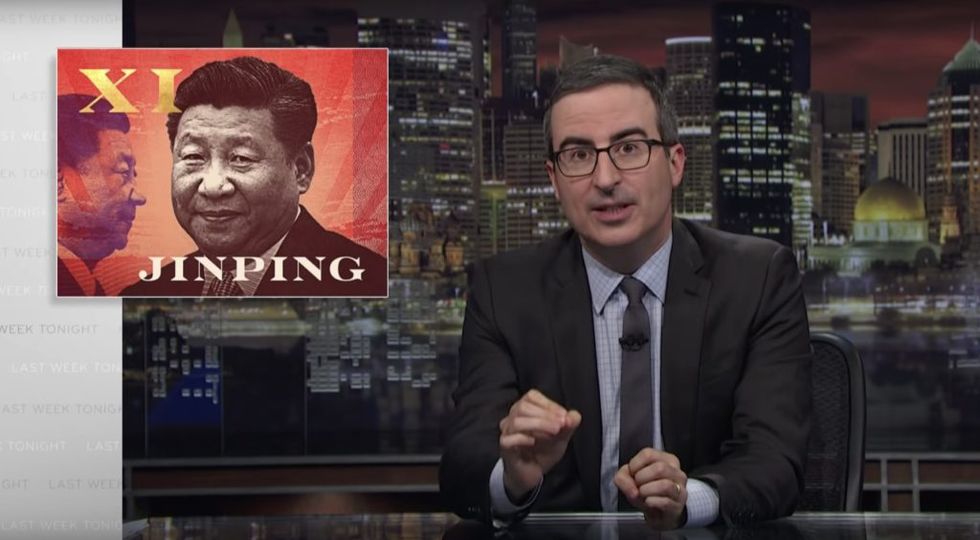 John Oliver performed a segment on his HBO show which resulted in his show––and HBO––being banned in China. (Screenshot via YouTube)

Comedian John Oliver — host of HBO’s Last Week Tonight — is public enemy number one in China due to how he skewers the political elite of this communist country. Not only is his show banned in the world’s most populous country, but he is, too.

(Oliver was banned for the following segment, by the way.)

Government censorship has always been alive and well in China, but a significant crackdown in 2018 means that Oliver will have a lot of company. Chinese authorities are now scouring online broadcasting platforms for 10 categories of violations of “mainstream values.” In effect, the government is trying to eradicate many of the behaviors now embraced by members of the country’s burgeoning middle class, and going after the many online services spreading the word.

A recently discovered unpublished document called “Management requirements for live service information and content”  shows that China is censoring content in an effort to dampen online sources of creativity, personal expression, and political criticism. The list of contraband behaviors is long and laughable. Chinese citizens streaming a wide variety of activities — everything from visiting tattoos parlors to proselytizing religion to suggestive dancing to seductive use of voice acting to inflame passions — is now considered taboo.

As The Globe and Mail reports, the document offers a ringside seat to the government’s paranoia and insecurities, said William Nee, China researcher for Amnesty International.

The edict’s specificity “is revealing — it shows what exactly they are worried about,” said Yaxue Cao, the founder and editor ofChinaChange.org, which publishes news and commentary related to Chinese civil society and human rights.

“It targets political dissent of course, but any activities that might cause a large number of people to coalesce, whether through popular entertainment such as Duanzi (jokes) and cartoons, or through direct sales network,” she said, in an email. “It also aims at content that might give people ideas of resistance and how-to knowledge. I go through each category, this is the theme I see: a heightened sense of regime insecurity.”

An ASM Response is something that everyone has experienced, that pleasurable feeling often likened to a chill or a tingle down your spine. The banned videos and audio recordings invariably showcase people — almost always young women — whispering breathlessly into high-quality binaural microphones, and that’s deemed far too much stimulation for Chinese men. The professional recordings, best experienced while wearing headphones, make it sound like the speaker is whispering to you suggestively as her voice moves from ear to ear. She may even adopt suggestive poses, or whisper words like “do you have any instructions, your highness” while kissing and licking the microphone.

Humor aside, Chinese scholars and academics are not surprised by the crackdown. President Xi Jinping has overseen a broad reinvigoration of the Communist Party’s supervision over Chinese life, and this is just the latest sign that his grip is tightening.