Fox and Friends Just Warned Donald Trump Not to Tweet About North Korea, But They Don't Think He'll Listen 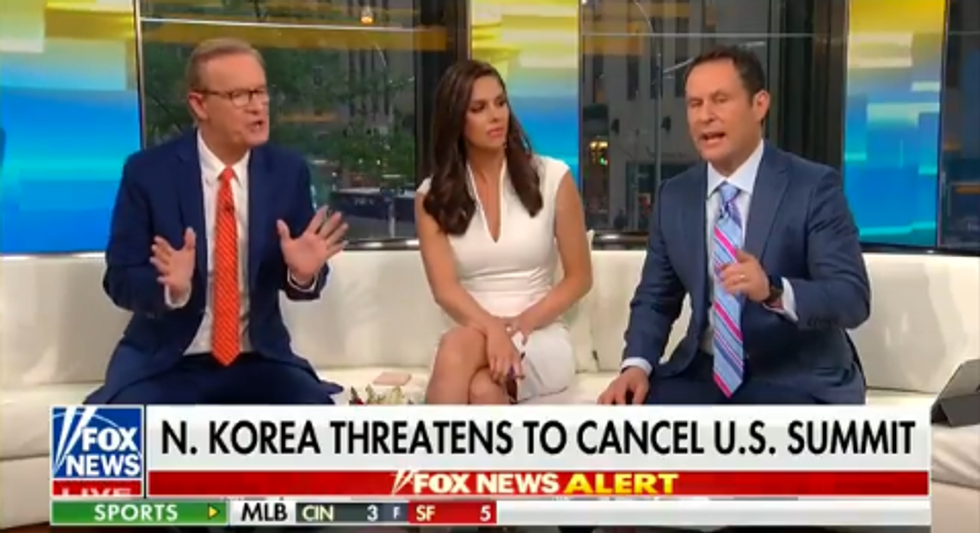 Fox News host Brian Kilmeade urged President Donald Trump to not tweet about North Korea, following yesterday's news that North Korea may back out of June's scheduled nuclear summit with the United States and allies in Asia.

After discussing the possible reasons for North Korea's threat with his colleagues, Kilmeade said that the president is making a smart decision by not issuing a knee-jerk reaction tweet on North Korea, something he is famous for doing.

I'd add this to it. The president not tweeting is one of the smartest things. Just to stay out of it for now, let the diplomats handle it at a lower level because if the president gets in on it too aggressively with a misinterpretation, the whole thing could blow up.

"I think it'll be a measured tweet," Kilmeade conceded if Trump is unable to abstain from addressing North Korea on Twitter.

Fox's Brian Kilmeade implores Trump not to tweet about North Korea: "Just to stay out of it for now" https://t.co/bnQwLrTmRt
— Media Matters (@Media Matters) 1526472660.0

“We have no information on that,” Under Secretary of State for Public Diplomacy and Public Affairs Heather Nauert responded. “Let’s not get ahead of ourselves. We need to verify it.” No further comment from the Trump administration is available at this time."

Kim is also threatening to back out of the much-anticipated nuclear summit between Asian allies and the United States, which is scheduled for June 12 in Singapore.

Tuesday night that threat escalated with reporting that North Korea has no intention of denuclearizing.

Since rumors about an American-North Korean meeting began to swirl earlier this year, skepticism has abounded over whether the United States was being used as merely a propaganda tool. In March, foreign policy columnist Jeffrey Lewis issued a warning about dealing with North Korea, based on their demonstrated untrustworthiness in the past.

North Korea has been seeking a summit with an American president for more than twenty years. It has literally been… https://t.co/h0cFEijXn6
— Jeffrey Lewis (@Jeffrey Lewis) 1520554304.0

“But Kim is not inviting Trump so that he can surrender North Korea’s weapons,” Lewis tweeted in March. “Kim is inviting Trump to demonstrate that his investment in nuclear and missile capabilities has forced the United States to treat him as an equal.”

Based on yesterday's threat, Lewis appears to be correct, that North Korea's gambit to be treated like an equal by the United States, by having an American president offer to speak face-to-face, seems to be paying off. The Trump administration has already offered major economic promises to the rogue nation in exchange for "denuclearization," however, there is no agreed upon definition of what denuclearization will look like.

If North Korea's move on Tuesday is any indication, a nuclear-free Korean peninsula may not be as attainable as once thought. But Trump believes he can fix anything. “I alone can fix it” was one of his favorite campaign lines, and he very well may think he can strongarm Kim into denuclearization with a “great deal.”

Conservative columnist David Frum tweeted that he, like Doocy, wonders if Trump is even capable of not firing off potentially inflammatory or "boastful" tweets.