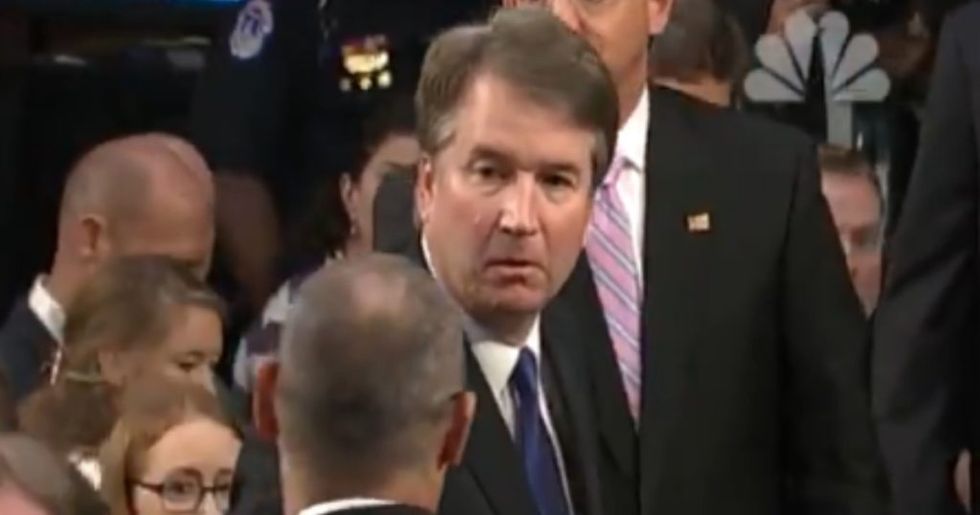 During the first day of his Senate confirmation hearings on Tuesday, Judge Brett Kavanaugh snubbed Fred Guttenberg, whose daughter Jaime was killed during this year's mass shooting in Parkland, Florida. The White House tried to defend Kavanaugh's actions, but multiple video recordings show what really happened.

Guttenberg is seen approaching Kavanaugh with his hand extended while introducing himself: "Excuse me, I'm Fred Guttenberg. My daughter was murdered at Parkland," he said to Kavanaugh.

Kavanaugh scans Guttenberg, stares, turns away and leaves the area, all while looking like he can't wait to get away from Guttenberg.

"Okay, keep walking away, have a good day," Guttenberg yells at Kavanaugh.

"Before the Judge was able to shake his hand," Deputy White House Press Secretary Raj Shah tweeted, "security had intervened."

Shah shared a video which "clearly shows" the White House is lying. Kavanaugh waits for Guttenberg to identify himself, before turning away in disgust. Security did not intervene until Kavanaugh was walking away, which destroys the White House's claim.

Guttenberg also tweeted following the incident, and it matches what is easily visible from multiple angles - Kavanaugh consciously and callously chose to dismiss the father of a school shooting victim.

"Just walked up to Judge Kavanaugh as morning session ended. Put out my hand to introduce myself as Jaime Guttenberg's dad," Guttenberg recalled on Twitter Tuesday afternoon. "He pulled his hand back, turned his back to me and walked away."

I guess he did not want to deal with the reality of gun violence.

The Associated Press's Andrew Harnik captured the moment Kavanaugh noped out on Guttenberg.

Fred Guttenberg, the father of Jamie Guttenberg who was killed in the shooting in Parkland, Fla., left, tries to sh… https://t.co/6RWYF0rswm
— Andrew Harnik (@Andrew Harnik) 1536084276.0

Twitter users called out the White House for its flagrant disregard for the truth.

Some thought Shah and Kavanaugh should issue Guttenberg an apology.

"You should apologize to Mr. Guttenberg. So should Kavanaugh."

Gonna go with no.

Seems like people are tired of having their intelligence insulted.

@RajShah45 Even though "security intervened " Kavanaugh still could have shaken his Hand. He knew who Guttenberg wa… https://t.co/4sNenWXDtz
— shiblie (@shiblie) 1536131797.0

Kavanaugh's face says it all - he wanted out of there.

@RajShah45 The other closer shots show the look on Kavanaugh's face said everything he turned his back and then sec… https://t.co/X5hHbh6zCx
— NettieO (@NettieO) 1536131680.0

There is one disturbing possibility, however.

In July, President Donald Trump told supporters at the Veterans of Foreign Wars National Convention in Missouri: "What you’re seeing and what you’re reading is not what’s happening."

It appears the White House is trying to live up to that terrifying take on reality.