Trump's Campaign Manager Just Went Off on a Reporter Who Shouted Questions At Trump During His Singapore Signing Ceremony, and This Is Not Normal 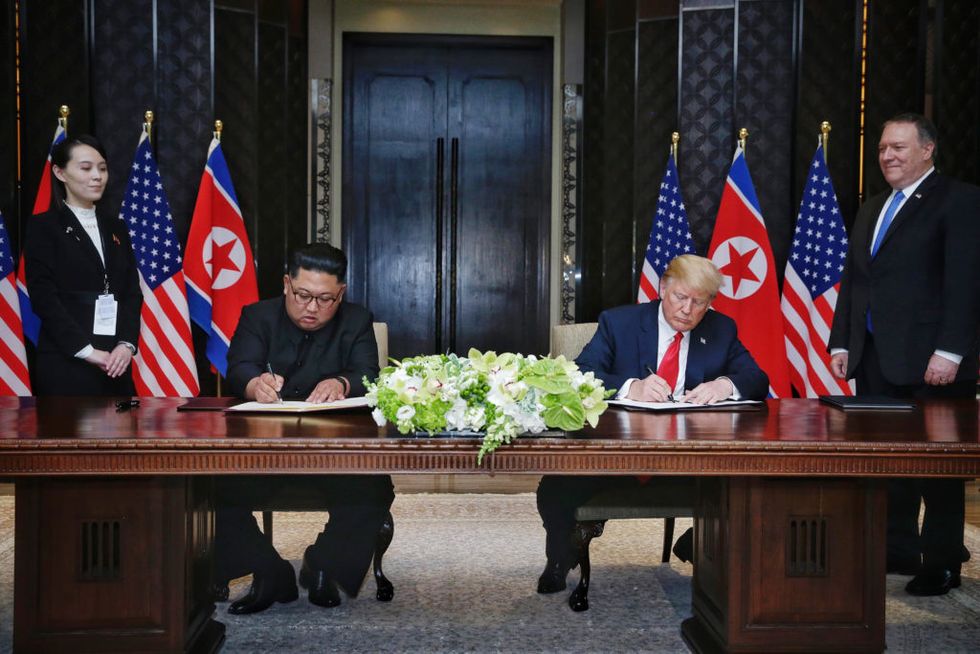 President Donald Trump held his long-anticipated and controversial summit with North Korean Dictator Kim Jong Un on Tuesday, in which Trump and Kim signed a pact pledging to "denuclearize" the Korean Peninsula.

During the signing, CNN's Jim Acosta shouted a couple questions at the president.

“Mr. President, did we agree to denuclearize?” Acosta asked. The president responded that he and Kim are "starting that process very quickly, very, very quickly. Absolutely.”

In response, Brad Parscale, Trump's campaign manager for the 2020 election, tweeted that Acosta should have his press privileges revoked.

"Jim Acosta should immediately have his press credentials suspended," Parscale wrote. "He is an absolute disgrace."

Jim @Acosta should immediately have his press credentials suspended. He is an absolute disgrace! @realDonaldTrump https://t.co/EY18ZeIq2h
— Brad Parscale (@Brad Parscale) 1528811322.0

Acosta and Trump have had a contentious relationship since the president took office. Trump regularly refers to CNN, and Acosta in particular, as "fake news."

Acosta also asked the president if he and Kim discussed Otto Warmbier, the American student who died upon returning to the United States after he had been detained in North Korea for stealing a poster from his hotel.

@parscale @Acosta @realDonaldTrump Jim @Acosta deserves a medal for the abuse the administration has hurled at him.… https://t.co/iG1rezqOy1
— Hollie Mileski (@Hollie Mileski) 1528822543.0

Parscale's tweet is an ominous foreshadowing of the Trump administration's expected future assaults on the free press. Trump and his armada of confederates, which includes anchors on Fox News, habitually refer to any negative coverage of the president as "fake," even when what is being reported is true.

@parscale @Acosta @realDonaldTrump He embarrassed this entire nation on the world stage last night and that, by its… https://t.co/w1cafiT1Fk
— 🐱CrazyCatChic🐱 (@🐱CrazyCatChic🐱) 1528825610.0

It's not like Acosta's questions were out of left field, either. The agreement signed by Trump and Kim contains the weakest and least enforceable terms yet pursued by the United States in the decades-long effort to get North Korea to abandon its nuclear weapons program.

It contains no language establishing any inspections, verification, or demands for complete, unequivocal denuclearization, despite Secretary of State Mike Pompeo and other administration officials' assurances of enforcing North Korea's promise. Of course, we've been down this road many times before, and North Korea has never kept its word.

Trump also lavished praise onto the 34-year-old autocrat, whose country operates as a prison-state, complete with concentration camps, brutal public executions, and starvation of its 25 million citizens. Trump said it was an "honor" to meet Kim and that he could tell that Kim "really loves his people."

North Korea's human rights abuses were not mentioned in the 45-minute closed-door chat between Trump and Kim, nor have they been challenged by Trump or his team of negotiators who arranged the summit. Trump did, however, manage to pitch potential real estate development on North Korea's "beautiful beaches."

One said the Trump administration is trying to "recreate a NK press corps in the United States."

@parscale @Acosta @realDonaldTrump The question asked, in a polite tone, was 'did he agree to 100% denuclearization… https://t.co/PHpvELLrD6
— Hollie Mileski (@Hollie Mileski) 1528822804.0

@parscale @Acosta @realDonaldTrump You live in America! If you want to take away Press credentials, move to Russia… https://t.co/VAPrHlNSYi
— Coffee Lover (@Coffee Lover) 1528826523.0

Seems like people are tired of Trump and his team's continual "stomping on the Constitution."