Trump’s Proposed Border Wall Will Be Exempt From Environmental Regulations

Trump’s proposed border wall with Mexico is proving to be a political failure for the president and a potential disaster for the environment. 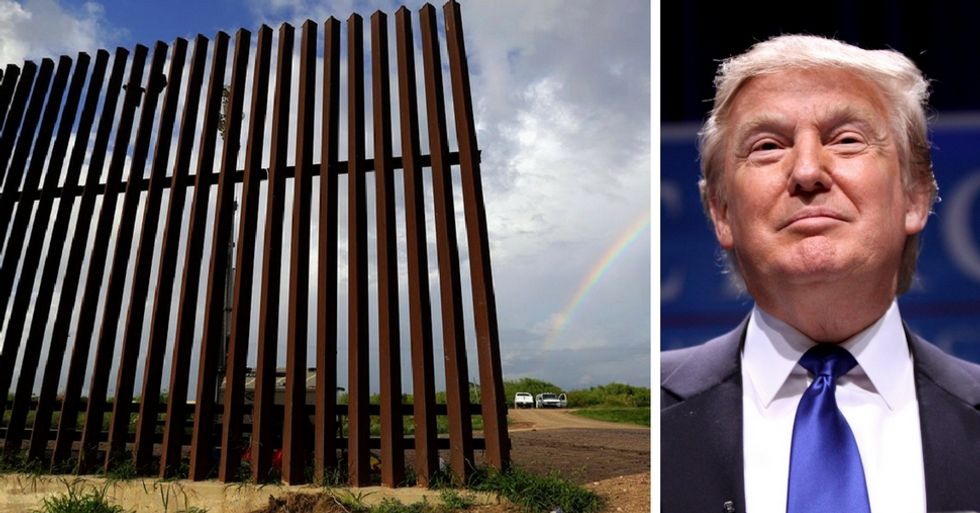 Despite his most infamous campaign promise, President Donald Trump’s proposed border wall with Mexico is proving a political failure for the president and a potential disaster for the environment.

Because of Trump’s dedication to rolling back environmental regulations, the proposed border wall could be catastrophic for the local environment. The wall would require the massive production of cement, which is a large contributor to greenhouse gas emissions.

Earlier this month, the Department of Homeland Security issued a series of waivers to bypass the National Environmental Policy Act. NEPA was enacted in 1970 shortly after President Richard M. Nixon created the Environmental Protection Agency to safeguard the environment during government projects, such as infrastructure development. DHS’s current waivers would allow a 15-mile stretch of border construction in San Diego to bypass NEPA. As of April 2017, 450 companies have submitted proposals to build a border wall prototype.

Despite hundreds of bids, however, the federal government has not yet awarded any construction contracts for building or testing any wall design. Proposed variations of the wall include a wire wall, a maximum-security mesh wall, a solar-powered wall, a security curtain, a “Hadrian’s wall,” a “piece of art” wall and a “wall to end all walls.” The Department of Homeland Security estimates the cost of a border wall to be in excess of $21 billion. The Trump administration requires all wall bids to specify a height of 30 feet; the wall must be unclimbable and prevent digging below the wall for at least 6 feet; and the side facing the U.S. must be “aesthetically pleasing in color.”

Endangered Species Would Be Pushed Closer To Extinction

Eliminating environmental protections for border wall construction would greatly endanger wildlife. An estimated 89 endangered species could be affected; construction would disrupt migration patterns, restrict access to resources, and reduce the water supply on which these animals depend. Animals such as the jaguar and the highly endangered Mexican gray wolf would lose access to mating routes and escapes from cold weather. Blocking these essential routes could hasten the extinction of these now rare faunae.

National parks, wildlife refuges, and estuaries would also be in danger of being destroyed if these waivers are enacted. Although the Department of Homeland Security maintains “impacts to the environment, wildlife, and cultural and historic artifacts are analyzed and minimized, to the extent possible,” it is difficult to accept DHS at their word. Since taking power, the Trump administration has rolled back many of former President Obama’s EPA regulations via executive orders. The newly-appointed Administrator of the EPA, Scott Pruitt, is an outspoken climate change skeptic who refuses to acknowledge that carbon dioxide gas is warming our planet. Scientists, lawyers, and environmental activists are using all available resources to push-back against the president’s perilous agenda.

The Border Wall Could Start A Trade War

The potential economic impact of a border wall is furthering the debate over whether the project is even necessary. President Trump has suggested funding the wall with a 20 percent tariff, or import tax, on Mexican goods. Consequently, imposing a tariff on Mexican goods means that American taxpayers would directly fund the wall, which breaks one of the president’s most outspoken campaign promises that Mexico will pay for the wall.

According to the United States Census Bureau, Mexico is the United States’ third largest trading partner, accounting for 14.4 percent of all American imports and exports. Mexican imports ($155 billion) to the US currently outpace exports ($119 billion) by $36 billion. The construction of a border wall could cause an embargo of American goods, such as corn, to Mexico, causing prices to rise and our trade deficit to expand further. A decrease in demand for American crops would adversely affect American farmers, who are already struggling economically with declines in production caused by climate change.

Illegal Immigration Is Declining Without A Border Wall

Reducing illegal immigration between Mexico and the United States has been President Trump’s primary justification for the construction of a wall along the border, despite his accurate assertion that illegal immigration from Mexico to the United States is the lowest in 17 years. In fact, since 2000, the number of people apprehended at our southern border has decreased by 73%. The United States Border Patrol use their apprehension rates to calculate the number of people attempting to cross into our country illegally. There are an estimated 5.6 million undocumented Mexican immigrants currently living in the US, a figure which has held steady since the beginning of the Obama Administration. It is essential to point out that under President Obama 2.5 million people were deported, more than any other administration.

A border wall, however, would not stop people from trying to illegally enter the United States. From 2009-2014, the number of Mexicans leaving the United States outpaced those trying to enter, according to Pew Research. Border fences are designed to block vehicles, and individuals who brave the inhospitable desert do so out of desperation. Potential terrorists are typically not undocumented, and drug cartels often find ways to circumvent evolving border security. Since the 1990s Mexico has grown into the world’s 11th largest economy, and refugees from increasing violence from Central America are the primary seekers of asylum in the US through the southern border. Any additional type of physical barrier between the neighboring countries seems a colossal waste of resources and brings unnecessary risks to the economy and the environment.

In his presidential announcement speech last year, Mr. Trump said, “nobody knows walls better than me,” and promised Mexico would pick up the tab for the multi-billion-dollar project. This promise helped propel him to an Electoral College victory over Democrat Hillary Clinton, despite losing the popular vote to her by nearly 3 million votes. In response, Mexico’s current and former presidents have both firmly and repeatedly denied that their country will pay for it; “Mexico will not pay for the f***ing wall,” former Mexican president Vicente Fox said in a video that has since gone viral.

Transcripts of the 45th president’s first phone call to Mexican president Enrique Pena Nieto reveal Trump pleaded that the Mexican leader not “say that anymore because if you are going to say that Mexico is not going to pay for the wall, then I do not want to meet with you guys anymore because I cannot live with that.” Concerned about the political fallout, Trump admitted that the border wall was the most pressing topic of their conversation.

“Politically this might be the most important [thing the neighboring countries] talk about,” he said.

There may be a small glimmer of hope for the president; the Republican-led Congress recently passed a spending bill with $1.6 billion in funding for the border wall. Because it needs 60 votes to pass the Senate, GOP lawmakers would have to garner eight “yes” votes from Senate Democrats. A Pew Research poll shows only 35% of Americans support the construction of a border wall.

Mexico’s unsurprising and abject refusal to fund the wall is not the only challenge facing the president. In June of 2017, President Trump called for the wall to be solar-powered during a meeting with congressional leaders. Following the meeting, House Majority Whip Steve Scalise (R-La) said solar panels would enable the wall to “pay for itself.” Asking for solar panels seems out of character for the president, as he has habitually dismissed solar and other forms of renewable energy, claiming in 2012 that solar technology “is not there yet” and “hasn’t caught on.” Contrary to the president’s assertions, the solar power industry is growing at 17 times the rate of the national economy, employing more than 260,000 people. Despite President Trump’s promises to bring back coal jobs, the fossil fuel industry still only employs approximately 187,000 people.