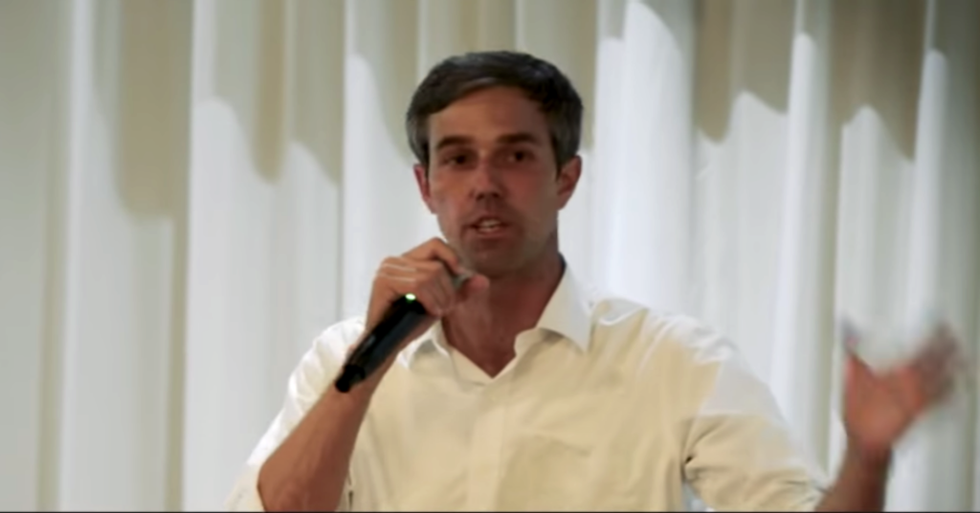 In their campaign to win one of Texas' U.S. Senate seats in the 2018 midterms, Republican Cruz recently attacked O'Rourke for being un-American and less patriotic. Why? Because of O'Rourke's defense of the U.S. Constitution and honest answer about a divisive subject.

During a town hall meeting in Houston, Texas, on August 10, an audience member asked O'Rourke his opinion on the National Football League (NFL) protests against the deaths of unarmed Black people during encounters with law enforcement. Rather than avoid the topic or provide a vague response while avoiding the actual question, O'Rourke answered honestly while respecting the questioner.

Texas voters organization Greater Houston for Beto—frustrated with political posturing, pandering and double speak—shared the video as an example of a straight answer. From there, it was picked up by online video producer Now This and turned into one of their own videos, going viral on Facebook and Twitter.

People are applauding Beto O'Rourke both for his straightforward honesty and his explanation of his stance while respecting the opposing view.

The unidentified off camera man at the Texas town hall stated he has relatives who are veterans. He then asked O'Rourke, "I wanted to know how you personally felt about how disrespectful it is when you have the NFL players kneeling during the national anthem."

"I wanted to know if you found that disrespectful to our country, to our veterans, anybody related to that," the man continued. "I just find it incredibly frustrating that people seem to be OK with that."

From the phrasing of the question, it was clear how a politician who panders to his audience members would need to respond. However O'Rourke went with honesty over political maneuvering.

After thanking the man for a great question on a very tough issue that "if we don't talk about is not going to get better", O'Rourke stated his gratitude to active duty military members, retirees and veterans. He then stated his short answer to the question of NFL protests being disrespectful was "no, I don't think it's disrespectful."

His response was met with enthusiastic applause. O'Rourke went on however to explain his reasoning stating "reasonable people can disagree on this issue...and it makes them no less American to come down on a different conclusion to this issue."

O'Rourke relayed reflections gained from the books Parting the Waters: America in the King Years 1954-1963 by Taylor Branch, a three-volume history of Martin Luther King Jr. and the Civil Rights Movement.

@danpfeiffer I live in TX and @BetoORourke has my vote this November. He is absolutely brilliant and listening to… https://t.co/FL3Oek1NdC
— Issa Sledge (@Issa Sledge) 1534902918.0

"[T]his non-violent peaceful movement to get better—because they didn't get full—civil rights for their fellow Americans, the challenges that they faced," O'Rourke stated before giving examples of peaceful protests met by violence and even death. He added that some who protested for civil rights were also veterans or relatives of those who died during WWII, defending freedom on the battlefield.

O'Rourke then went on to explain how this connects to the current protests being staged in the NFL.

"The freedoms that we have were purchased not just by those in uniform...but also by those who took their lives into their hands riding those Greyhound buses—the Freedom Riders—in the deep South in the 1960s who knew full well that they would be arrested... Rosa Parks..."

"...peaceful, non-violent protest, including taking a knee at a football game to point out that Black men, unarmed; Black teenagers, unarmed; and Black children, unarmed; are being killed at an alarming rate including by members of law enforcement without accountability, without justice."

"And so non-violently, peacefully, while the eyes of this country are watching these games, they take a knee to bring our attention and our focus to this problem to ensure that we fix it. That is why they are doing it. And I can think of nothing more American than to peacefully, standing up, or taking a knee, for your rights, anytime, anywhere, in any place."

In response to the video, Senator Cruz stated, "When Beto O’Rourke says he can’t think of anything more American (than players taking a knee), well I got to tell you, I can." Cruz then said service members on military posts saluting the flag and standing at attention when the anthem is played was more American.

But a review of the video and O'Rourke's statement shows Cruz misrepresented his point and his remarks. O'Rourke's straightforward off the cuff response drew kudos. Cruz's prepared statement to the press several days later drew some ridicule.

@danpfeiffer I for one am excited to hear a politician that can string together a complete sentence that demonstrat… https://t.co/osU63B0zxh
— Random Old Guy (@Random Old Guy) 1534903110.0

O'Rourke made no claims about the most or more American thing. O'Rourke stated that the right to peaceful protest guaranteed by the U.S. Constitution and employed by loyal citizens since before the founding of the United States during the Revolutionary War could not be more American in nature.

People on social media understood what O'Rourke meant and appreciated the sentiment and the choice of honesty over political posturing.