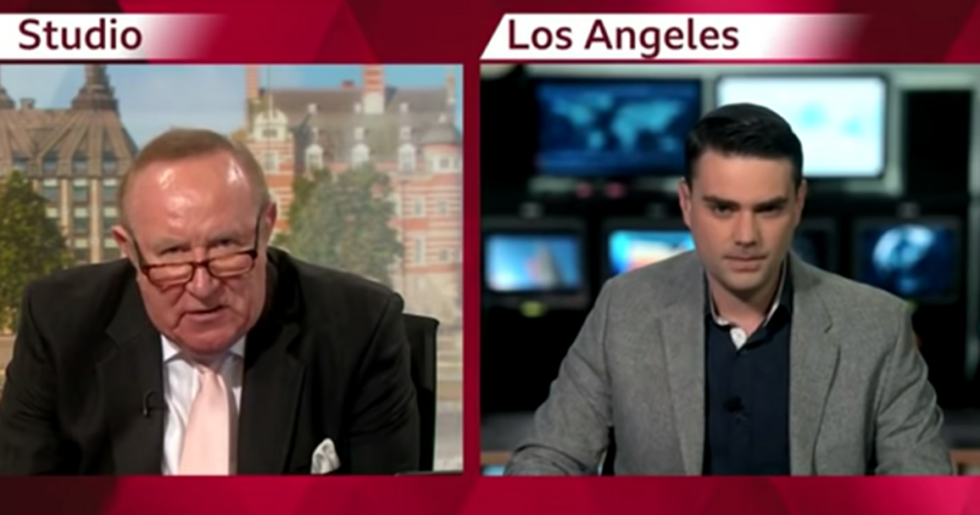 Conservative commentator Ben Shapiro had a total meltdown and stormed out of an interview with the BBC Thursday, accusing host Andrew Neil of being a “leftist” and boasting about his supposed popularity.

Shapiro, who was promoting his new book, The Right Side of History: How Reason and Moral Purpose Made the West Great, imploded when Neil asked Shapiro if the American right's crusade against abortion rights threatens to send the country back to the “Dark Ages.”

“You purport to be an objective journalist,” Shapiro sniped. “BBC purports to be an objective, down-the-middle network. It obviously is not, it never has been. And you as a journalist are proceeding to call one side of the political aisle ignorant, barbaric, and sending us back to the Dark Ages, why don’t you just say you’re on the left.”

Neil, who runs The Spectator, a conservative magazine, laughed in Shapiro's face.

“If you only knew how ridiculous that statement is you wouldn’t have said it," he quipped.

Okay, this is epic.

Shapiro became increasingly agitated as Neil pressed him on controversial comments he has made in the past, like this tweet in which Shapiro says that Arabs "like to bomb crap and live in open sewage," “Jews who vote for Obama are by and large Jews in Name only," and “the Palestinian Arab population is rotten to the core."

Israelis like to build. Arabs like to bomb crap and live in open sewage. This is not a difficult issue. #settlementsrock
— Ben Shapiro (@Ben Shapiro) 1285614365.0

Shapiro struggled to defend himself, insisting that “they elected Hamas, they educate their children in school that Israel should be obliterated and that the "point that I am making is that most Jews that are ethnically Jewish are not religiously Jewish in any context,” he claimed.

“No no no, the point you were making that Jews who vote for Obama are Jews in name only,” Neil replied.

“I hope you’re having fun by the way going through every old tweet I’ve ever sent to try to do gotcha-questions,” Shapiro said in response. “If you would like to discuss something I’ve done in like the past five years, how about we do that. I have an entire website of dumb, bad things I’ve said.”

Well, that was something.

@benshapiro @afneil 1) You spent the whole time attacking the BBC instead of answering for your historic bigotry. I… https://t.co/xRPHxO9DK7
— Chris Walker (@Chris Walker) 1557505319.0

“Well, are those videos labeled by me?” Shapiro shot back. “Why are you picking out random YouTube videos put up by people who are not me and then attributing the titles to me?”

By the time the 16-minute interview started winding down, Shapiro's blood was boiling.

“You talk about undermining the public discourse,” Shapiro whined. “It seems to me that simply going through and finding lone things that sound bad out of context and then hitting people with them is a way for you to make a quick buck on BBC off the fact that I’m popular and no one has ever heard of you.”

“There aren’t many bucks to be made off the BBC unlike American broadcasting, Mr. Shapiro,” he said.

“This whole thing is a waste of time," Shapiro groaned. "Frankly, I don’t care — I don’t frankly give a damn what you think of me since I’ve never heard of you.”

Neil was then able to take one more swipe.

“Thank you for your time and for showing that anger is not part of American political discourse,” he said.

Afterward, Shapiro, who was "not familiar with Neil's work," apologized before the interview aired.

"I misinterpreted his antagonism as political Leftism (he termed the pro-life position in America 'barbaric') – and that was apparently inaccurate," Shapiro tweeted. "For that, I apologize."

Ben Shapiro has been doing windmill dunks on a Fisher-Price hoop and everyone in the media was convinced that meant… https://t.co/Gtf6rzoZTR
— jordan (@jordan) 1557510184.0

Ben Shapiro, because when I need a true believer to appear on the BBC to defend conservative values, I turn to the… https://t.co/NmtCrdyfBF
— Jeff Tiedrich (@Jeff Tiedrich) 1557505644.0

Facts don't care about your feelings.