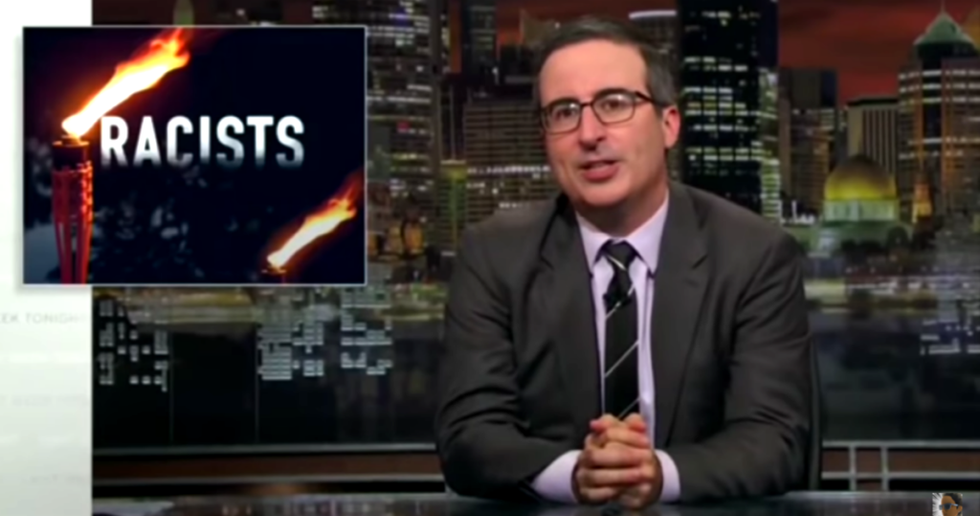 Sunday on his weekly HBO news recap show—Last Week Tonight—host John Oliver began the show with racists. Highlighting the greatest hits of the week in racism, Oliver covered everything from the poorly attended Unite the Right rally in Washington DC all the way to Laura Ingraham exposing herself on national television.

"We begin with racists," Oliver stated, then alluded to all the incidents caught on camera of people calling the police to complain about Black people barbecuing in parks, swimming in pools, mowing lawns and using coupons.

[Racists] are the reason 911 now has to answer calls with: ‘Is this a real emergency, or is there just a black person nearby?"

Oliver followed with news of the Unite the Right rally saying, "As we tape this show, right now tonight, the 'Unite the Right 2' rally is winding down."

A massive dozens of white nationalists apparently gathered in DC, where they were met by hundreds of counter-protesters calling them all assholes. And look, while that numerical discrepancy is heartening, let’s not get too reassured here."

"Because this week also brought a visceral reminder of the problems that we’re facing," Oliver continued before showing the results of a CNN poll. When asked if President Donald Trump is racist, 49 percent of United States voters think he is a racist while 47 percent do not.

But Oliver's complaint focused on the fact only 49 percent think Trump is a racist, not that the U.S. voters perceive their POTUS so poorly.

It's in his name! Whether you like or hate that about him you have to admit he's a f#&%ing frog!"

The HBO host continued on to his next example.

"Today’s [Unite the Right] demonstration," Oliver said to introduce his remarks on Fox News host Laura Ingraham, "is just the culmination of a week in which America’s regular dog-whistle racism became uncomfortably loud." Oliver then showed a clip from Ingraham Angle.

Ingraham again drew public ire after she lamented the folly of illegal and legal immigration changing the demographics of America.

Oliver played a clip of Ingraham's actual comments then made the following remarks about them.

With the key words of her prepared speech on the screen below her, Ingraham says, "In some parts of the country, it seems like the America we know and love doesn't exist anymore. Massive demographic changes have been foisted upon the American people."

"And they're changes that none of us ever voted for and most of us don't like," Ingraham says before blaming immigration and progressives. The Fox News host failed to specify when in her America that she knew and loved people voted on the demographics of who could live in America.

Demographics: statistical data relating to the population where subsets of it are based on identifiable differences such as age, religion, race, ethnicity or gender

She just came right out and said it, in the scripted commentary, straight down the camera, knowing her mic was on. No 'economic anxiety', no ‘some of them are good people’, just ‘I don’t want people who don’t look like [me] here'."

"You almost want to give her credit for honesty there," Oliver continued, "and then deduct twice as much credit because she's just being honest about how racist she is."

After earning high praise from White supremacists and resumed calls for boycotts of her sponsors for her demographic changes remarks, Ingraham tried to backpedal claiming her reference to "demographic changes" had nothing to do with changes in demographics.

But Oliver—like former Ku Klux Klan leader David Duke—knew the definition of demographics and exactly what Ingraham meant by immigrants leading to demographic changes. And he let her know why she should recognize how bad her comments were with the following comparison.

While Ingraham later tried to say her remarks had nothing to do with race, it is worth noting that no less an authority than David Duke, former grand wizard of the Klan, called it one of the most important truthful monologues in the history of the mainstream media."

"When the former head of the Klan likes what you’re doing," Oliver pointed out, "that should give you real pause."

Let me put it this way: if immediately after this taping, [convicted sexual predator] Dr Larry Nassar caught me in the hallway and said: ‘Hey man, loved your show,’ I’d think long and hard about what the f#&% I just said!"