Rudy Giuliani Went After Michael Avenatti on Twitter, and Avenatti Made Him Regret It Instantly 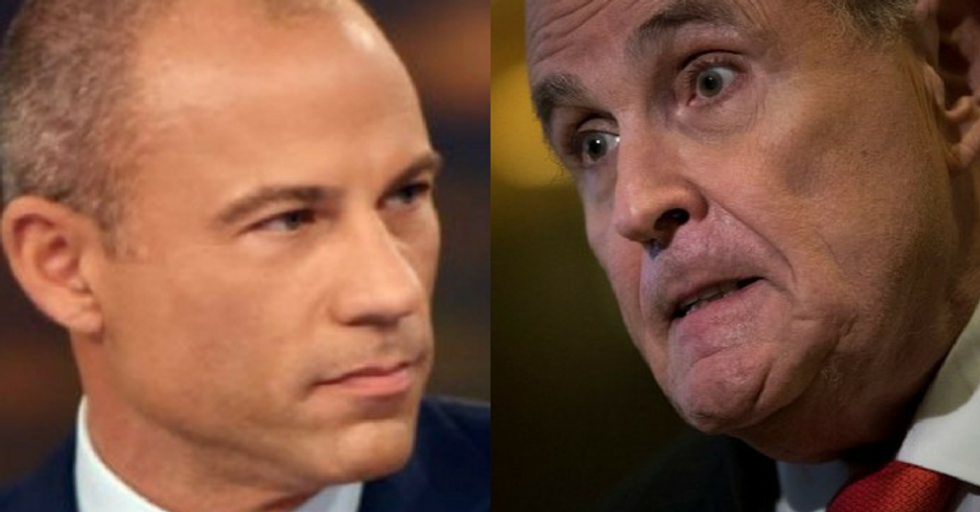 "Please be warned that Avenati[sic] is becoming desperate since he is being ignored. The Cohen-Cuomo tape makes clear Daniel[sic] claim is dead and with it Avenati’s[sic] meal ticket. Most media now consider him too much of a proven liar to put on. Any reliance is gross negligence."

Please be warned that Avenati is becoming desperate since he is being ignored. The Cohen-Cuomo tape makes clear Da… https://t.co/PQcGQU5vx7
— Rudy Giuliani (@Rudy Giuliani) 1532605534.0

You are a walking train wreck of a lawyer Rudy. Each time you open your mouth, it is a disaster. Where are all the tapes? Release them! Our case is over because Trump’s criminal co-conspirator said so? Let’s debate the facts and the law - any show any time. Put up or shut up!"

Avenatti went on to challenge Giuliani to an on air debate on one of his and the President's favorite venues, Sean Hannity's Fox News program.

.@RudyGiuliani Call your good buddy @seanhannity and let's go on his show and discuss the facts and the law relatin… https://t.co/ocroy4ktLb
— Michael Avenatti (@Michael Avenatti) 1532620680.0

Avenatti represents Stephanie Clifford, a woman Trump eventually admitted to paying $130,000 just prior to the 2016 presidential election through his longtime fixer, lawyer Michael Cohen. Clifford —who works as an actress, writer and director in adult films under the name Stormy Daniels— alleged an affair with Trump, but Trump paid her to remain silent.

The President received ridicule for his many versions of his involvement with Clifford before finally admitting his lawyer paid her. The same pattern of false statements before evidence required revealing the truth still dogs the President regarding the Trump Tower meeting with a Russian government operative.

Giuliani made the media rounds, discrediting facts harmful to his client and defending Trump in the court of public opinion, ever since the former New York City mayor and lawyer joined the private legal team of President Donald Trump. However Giuliani's version of events or facts routinely gets refuted.

But as Judge Andrew Napolitano put it on Fox News, Giuliani does not disseminate facts. "He's also serving as the president’s PR person, trying to undermine public credibility" in the many legal issues facing Trump.

In the course of his spin doctoring, Giuliani also tackles some of Trump's detractors either in interviews or on Twitter. Those confrontations rarely favor the embattled former mayor either.

In today's exchange on Twitter, Giuliani fared no better than normal. Twitter users responded with a few facts of their own for Trump's lawyer.

Some responded directly to Giuliani, calling his credibility and that of his employer in to question. A quick review of the comments show most were unfavorable toward both Giuliani and Trump.

While others weighed in on Avenatti's own response to Giuliani. Avenatti's Twitter feedback tended toward favorable.

The question of whether the former mayor helps or hurts the President's public image arises, given today's primary reactions to Giuliani —and Avenatti— by that very public Giuliani tried to reach.