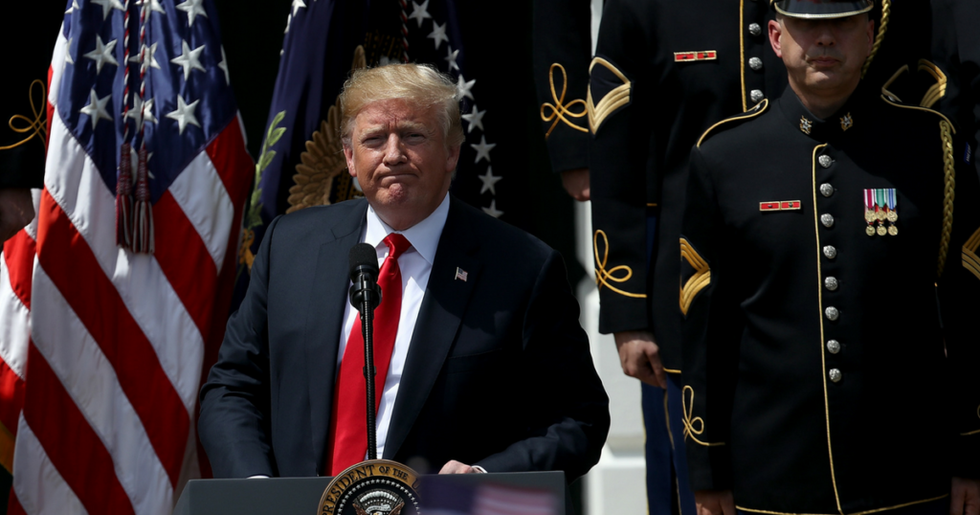 WASHINGTON, DC - JUNE 05: U.S. President Donald Trump concludes his remarks during a 'Celebration of America' event on the south lawn of the White House June 5, 2018 in Washington, DC. The event, originally intended to honor the Super Bowl champion Philadelphia Eagles, was changed after the majority of the team declined to attend the event due to a disagreement with Trump over NFL players kneeling during the national anthem. (Photo by Win McNamee/Getty Images)

President Donald Trump held a "Celebration of America" ceremony at the White House on Tuesday after disinviting the Philadelphia Eagles from what was supposed to be a Super Bowl Victory party.

Trump had canceled the event with the Philadelphia Eagles after many members of the team refused to attend, claiming that the Eagles were disinvited because of violating the NFL's new anthem policy.

Although it was later reported that no member of the Eagles had ever kneeled or stayed in the locker room for the national anthem at any of their games.

So, one attendee at yesterday's 'celebration' decided to send Trump a message by taking a knee while the national anthem was being played.

The moment was captured by a Danish TV anchor, Jesper Zolck, who said the man "didn't want to talk."

At The White House. One guy in the audience took a knee during the national anthem at President Trumps celebration… https://t.co/snxuWD7MmG
— Jesper Zølck (@Jesper Zølck) 1528225934.0

Zolck said the man "wouldn't answer" why he took a knee and that he refused to comment further. The man "didn't want to give his name either," Zolck reported.

Twitter flooded with reactions, praising the anonymous protester who brought the fight quite literally into Trump's backyard.

"This is what courage looks like," one user wrote.

@carinabergfeldt Freedom of expression and speech in the midst of tyranny, conformity, and corruption: this is what… https://t.co/QXaOSTC6o7
— Emme (@Emme) 1528227783.0

Another follower said "suppressing free speech," which in the case refers to not allowing NFL players to take a knee to protest police brutality, "shows disrespect to the office of the presidency."

And that Trump has shown nothing but disrespect toward the office he now holds.

@AlisandeDM @edhauser4 @Emme99me @carinabergfeldt No one has shown more disrespect to the office of the Presidency than Trump.
— Brit (@Brit) 1528228554.0

Someone even noticed a parallel to when a man named August Landmesser refused to give a Nazi salute in Germany during World War II. The connection? Standing up to the oppression of free thought.

One man quipped that Trump probably wouldn't have a problem with the gentleman who took a knee at the White House, because the man is white.

In an ironic twist, during the event, demonstrating his unbridled sense of patriotism, Trump forgot the words to "God Bless America."