Republican Congressman Tried to Use the Super Bowl to Mock Alexandria Ocasio-Cortez's Tax Proposal, and She Just Made Him Regret It 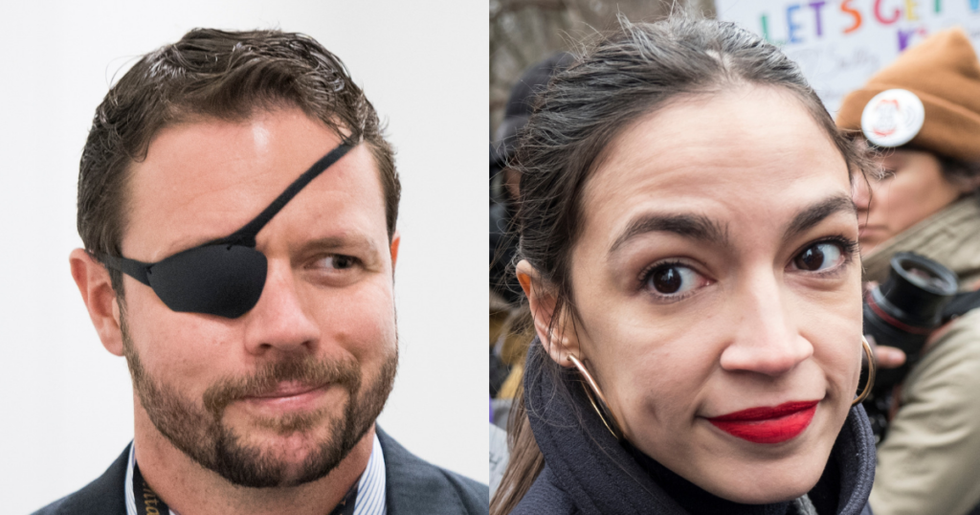 Congresswoman Alexandria Ocasio-Cortez (D-NY) shut down freshman Representative Dan Crenshaw (R-TX) after he mocked her plan to raise taxes on the wealthiest Americans.

In January, AOC proposed a 70 percent marginal tax on income above $10 million, and polls show the public supports the idea.

Shortly before the Super Bowl on Sunday, Crenshaw took to Twitter to mockingly ask "for a friend" if the New England Patriots should have to pay a 70 percent tax rate.

"Should someone propose a 70% tax on the Patriots so that NFL competition is more fair and equal?" Crenshaw tweeted shortly before Sunday's Super Bowl. "Asking for a friend."

Should someone propose a 70% tax on the Patriots so that NFL competition is more fair and equal? Asking for a friend.
— Dan Crenshaw (@Dan Crenshaw) 1549253835.0

Ocasio-Cortez shot back Monday morning with some facts, most notably that on average, NFL players earn far less than $10 million.

"The average NFL salary is $2.1 million, so most players would never experience a 70% rate," AOC replied. "The owners who refuse to hire Kaepernick would, though."

"You know it takes even less than 140 characters to just say: 'I’m in Congress but still don’t know what I’m talking about!'" wrote Sims. "See, so much more efficient that making us “guess” everytime you tweet."

It was all downhill from there for Crenshaw.

@AOC The millionaire elites and their lackeys are falling over themselves trying to discredit you, that means you are doing something right.
— Danny (@Danny) 1549287899.0

Does Crenshaw not get how taxation or sports work?

@AOC Agree with the 70% or not, I’m super concerned with how many republicans have made it clear they do not understand our tax system.
— FIRE EVERYONE SZN (@FIRE EVERYONE SZN) 1549287338.0

Crenshaw, an Afghanistan veteran, got pummeled for botching basic economics.

Brutally, as it were.

@DanCrenshawTX I truly appreciate your service and sacrifice in the military but you are really a stupid human being.
— Rage Donkey™️ (@Rage Donkey™️) 1549298318.0

@DanCrenshawTX The Republican Party is in bad bad shape when this is its brightest new star.
— Adam Best (@Adam Best) 1549302586.0

What a way to kick off his second month in office.

@DanCrenshawTX All this time being mad at kneeling football players and you guys never thought to once look up how the NFL works?
— Mike Drucker (@Mike Drucker) 1549292272.0

@DanCrenshawTX There is, a salary cap. Tom Brady? Not the highest paid QB in the NFL. Understands he needs others a… https://t.co/OaXRtAaN3l
— Captain Jack Gonzo (@Captain Jack Gonzo) 1549253974.0

@DanCrenshawTX How about we just stop giving teams our tax dollars for stadiums and call it even?
— Austin Petersen (@Austin Petersen) 1549286905.0

The Patriots won the Super Bowl, but AOC is once again the Twitter victor.