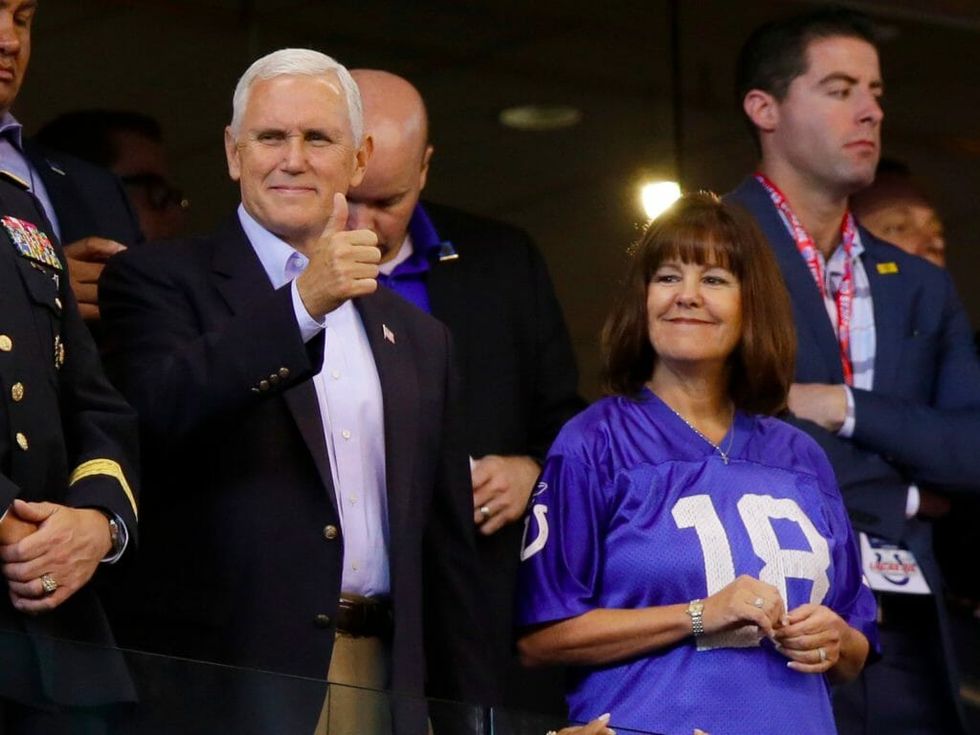 U.S. Vice President Mike Pence protested the rightful protesting of players at the beginning of a National Football League game on Sunday, as he was ordered to do by President Trump. During the national anthem in a game between the Indianapolis Colts and the San Francisco 49ers, some of the 49ers knelt and some of the Colts locked arms while wearing black T-shirts that read “We Will Stand For... Equality, Justice, Unity, Respect, Dialogue, Opportunity.” These players are silently protesting against police violence and racial inequality.

Pence, who had planned to attend the game for months, protested their First Amendment right to peacefully protest by walking out of the game after the anthem. “I left today’s Colts game because President Trump and I will not dignify any event that disrespects our soldiers, our Flag, or our National Anthem,” Pence said in a statement issued by the White House. Shortly after releasing the statement, the White House also released a photo of Pence and his wife at the stadium, hands held over their hearts during the anthem.

Trump defended Pence’s walk out on Twitter, revealing that the act was premeditated: “The trip by @VP Pence was long planned. He is receiving great praise for leaving game after the players showed such disrespect for country!”

The trip by @VP Pence was long planned. He is receiving great praise for leaving game after the players showed such disrespect for country!
— Donald J. Trump (@Donald J. Trump) 1507547113.0

After the departure, Pence and Trump were criticized for making a political production of the walk out, and that it was nothing more than a photo opportunity. This would contradict the words of Trump’s own Treasury Secretary Steven Mnuchin, who has said that athletes “can do free speech on their own time.”

An undisclosed official in Pence’s office shared that Pence left the game due to a previous conversation with Trump. “As he had discussed with the president, when several 49ers players disrespected the flag and the national anthem, the vice president decided to leave the game,” the official said.

The NFL also released a statement, but in defense of the players’ right to protest: “We should not stifle these discussions and cannot allow our rights to become subservient to the very opinions our Constitution protects. That is what makes us the land of the free and the home of the brave.”

Continue to Page 2 for more...

In response to Pence's walk out, social media was quick to mock his hasty departure...

I left the Republican Party because I will not dignify any party that disrespects the Constitution or the civil rig… https://t.co/juxrzfs2o1
— Molly (@Molly) 1507483248.0

...while others were more critical of his actions.

Pence is OUTRAGED that a few NFL players took a knee before a football game, SILENT about white supremacist rally i… https://t.co/XMohXvuvAl
— Judd Legum (@Judd Legum) 1507485913.0

Republican strategist and political commentator Anna Navarro pointed out that Pence and Trump used tax-payer money to stage their protest.

Aside from spending a quarter of a million dollars of tax-payer money for the trip, it has come to light the possibility that Pence had no intention of staying for the entire game to begin with. Pence was just in Las Vegas on Saturday, flew to Indiana for the Sunday game, and then after his walk-out he flew back west to California for a three-day fundraising trip. Before the game reporters were told to wait in their van, instead of following Pence into the stadium as is the usual custom, with the understanding that there might be an early departure.

Author Stephen King called Pence out on the publicity stunt: