There's a Campaign to Get 'American Idiot' to Top the UK Charts in Honor of Trump's Visit, and It Seems to Be Working 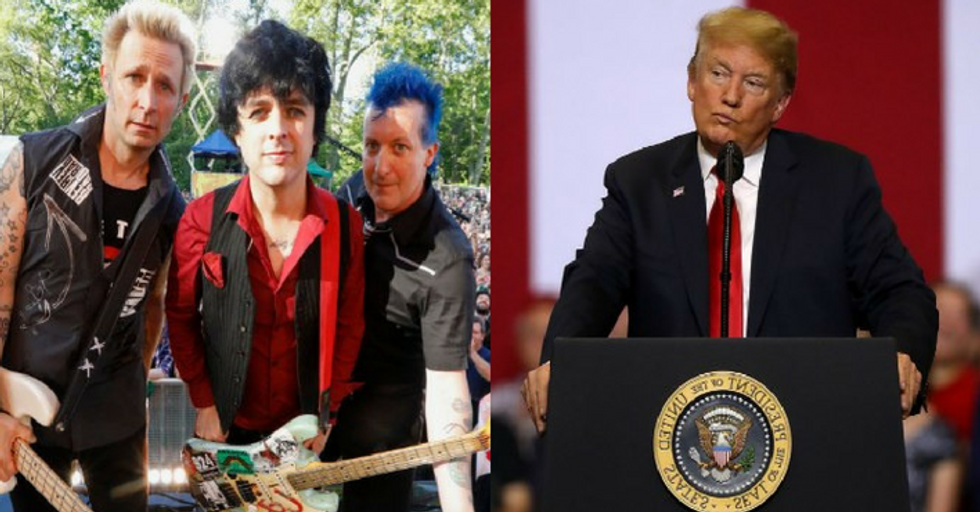 Back in September 2004, the United States was gearing up for an election year showdown between Republican incumbent George W. Bush and his Democratic challenger John Kerry. And the alternative-pop-punk-rock band Green Day released their seventh studio album: American Idiot.

The album was seen as a direct stab at oft ridiculed President Bush; a charge the band never denied. The album's success eventually inspired a Broadway musical of the same name.

The album debuted at number one in the United Kingdom back in 2004. And now in 2018, the first song from that album is gaining a resurgence in popularity there.

But why is a song from a 14 year old "punk rock opera" concept album suddenly surging back up the UK pop charts?

President Donald Trump is set to visit the UK on Thursday, July 12. The president arrives in London, England, in the afternoon. He comes straight from a meeting of the North Atlantic Treaty Organization (NATO) in Brussels, Belgium.

From his arrival point he and First Lady Melania Trump will go to Blenheim Palace in Oxfordshire, where UK Prime Minister Theresa May plays host at a black-tie dinner with 100 guests and ministers. Activists plan protests throughout the visit, including a giant floating diapered baby Trump in London and the Lord Mayor of Sheffield revoking the welcome mat.

In an effort to send another message to the president, activists began a social media campaign employing Facebook and Twitter and the hashtag #MAIGA. A take on Trump's own slogan, Make America Great Again or MAGA, MAIGA is Make "American Idiot" Great Again.

People were encouraged to download the song from July 6 to 12, the day Trump is set to arrive in the UK. They hope to have "American Idiot" top the UK pop charts just in time for the president's arrival.

So far, it appears their efforts are working.

As of Tuesday afternoon, the single had hit number 18 on the UK singles chart top 20.

It also made it into iTunes top 10.

As for the band that created the song, Green Day, in the tradition of punk rock's origins, never shied away from politics. In a September 2016 concert, Green Day frontman Billie Joe Armstrong asked a New Jersey crowd,

The band made no official announcement regarding the #MAIGA online campaign, but founding member, vocalist and bass guitarist Mike Dirnt, did give the effort a shout-out back in April.

No social media posts have yet been made regarding the MAIGA protest by other Green Day  personnel Armstrong or founding member, drummer Tre' Cool.

While the reasons behind all the protests set to greet Trump in the UK are serious, like his attacks against allies and human rights record, people are still having fun taking the piss, as they say in the UK, out of the president.