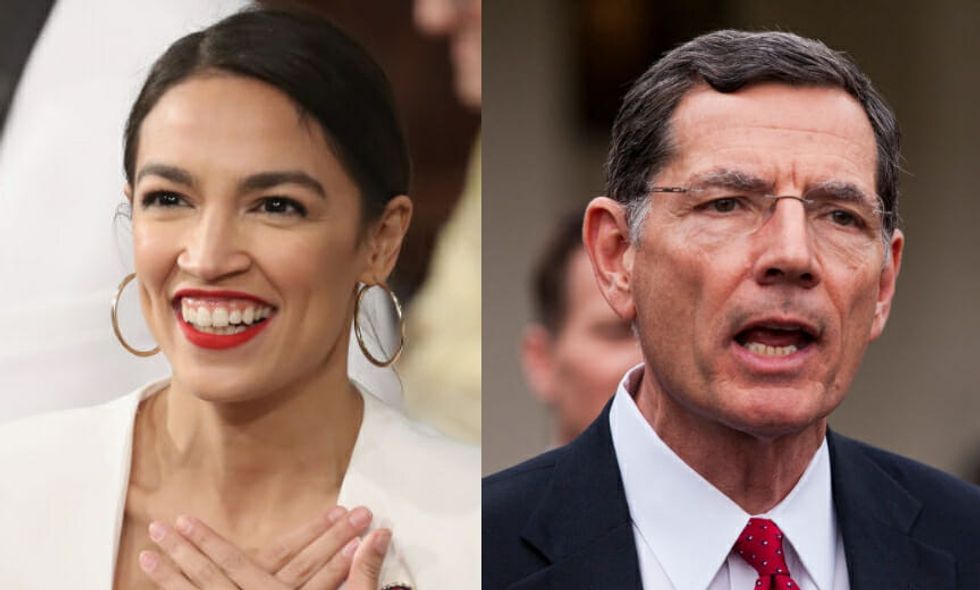 The Green New Deal, a sweeping environmental resolution by freshman Congresswoman Alexandria Ocasio-Cortez (D-NY), has been met with strong criticism from Republicans since its unveiling last week.

Many Republicans have spread outright false information regarding the resolution, even going so far as to claim it would ban air travel and require men to conserve their urine in jugs for recycling purposes.

Now, Senator John Barrasso (R-WY) is adding fuel to the fires of hysteria with his latest claim:

“There’s another victim of the Green New Deal, it’s ice cream! Livestock will be banned. Say goodbye to dairy, to beef, to family farms, to ranches. American favorites like cheeseburgers and milkshake[s] would become a thing of the past. Millions of American workers will lose their jobs.”

He's referencing a portion of the bill that aims to lower greenhouse gas emissions to net-zero, while acknowledging "we aren’t sure that we’ll be able to fully get rid of farting cows and airplanes that fast." Cows' flatulence contains high rates of methane and the rising population of cows bred for food produces more pollution than cars.

Her supporters rallied behind her.

They weren't finished yet.

Many decried the barrage of misinformation about the resolution, especially because it's about as binding as a general mission statement, unlike a bill passed into law.

What's more, it has majority support within both parties and is wildly popular among millennials. It's gotten a notable amount of support, including from a slew of 2020 presidential candidates.

A #GreenNewDeal is ambitious. It's bold. And I’m cosponsoring this resolution with @aoc and @senmarkey because it’s… https://t.co/TR1Al96BYv
— Kirsten Gillibrand (@Kirsten Gillibrand) 1549563437.0

Hopefully Americans will focus on the facts before it's too late.