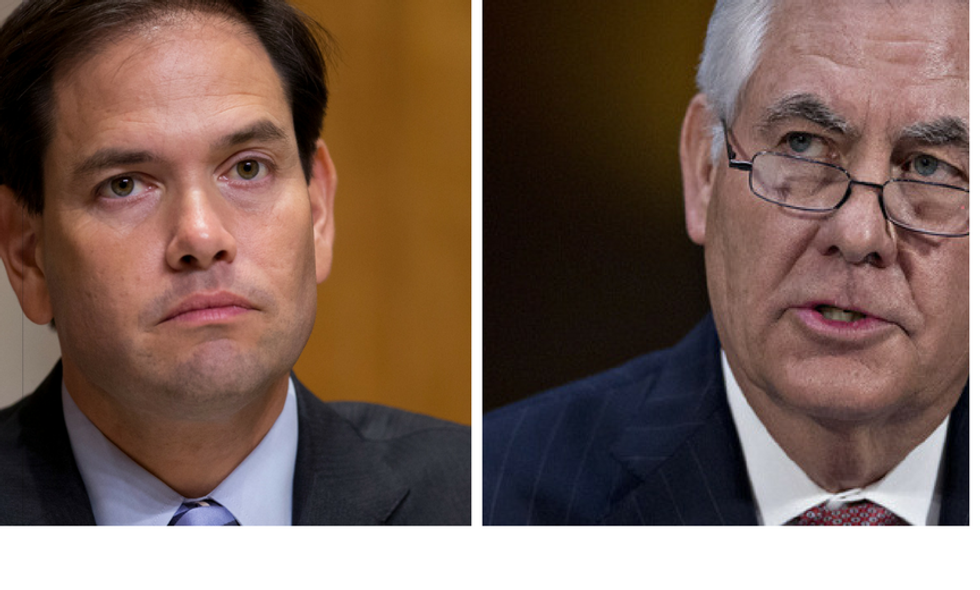 During the confirmation hearing of Rex Tillerson, President-elect Trump’s pick for Secretary of State, Republican Senator Marco Rubio did not hold back. Perhaps the most striking question of his questions sought to corner Tillerson over whether he would name Russian President Putin a "war criminal." Tillerson responded that he would never use such a term to describe him. That seemed to fire up Rubio, who proceeded to blast Tillerson for not publicly condemning Putin.

"It should not be hard to say that Vladimir Putin’s army has committed war crimes in Aleppo because it is never acceptable for a military—you would agree—to specifically target civilians, which is what has happened there," Rubio intoned. Tillerson attempted to demur by citing the need for information after his confirmation. "I look forward to being fully informed," Tillerson responded, infuriating Rubio who interrupted him declaring, "None of this is classified. There are dead people!" Minutes later Tillerson admitted that he would classify Putin's actions as crimes provided that he had sufficient information and evidence about them.

Rubio further tried to elicit Tillerson’s response to restraints on press freedom including imprisonment and killings of journalists under Putin's regime. The ExxonMobil chief, however, remained reluctant to put the blame on the Russian leader, arguing again that he lacks "sufficient information to make that claim....People who speak up for freedoms in regimes that are oppressive are often a threat and these things happen to them."

Rubio’s support may be crucial for Tillerson to receive confirmation from a closely divided Senate. Should he join with Russia hawks such as Senators John McCain and Lindsey Graham, Tillerson may not have the votes he needs. And that would prove a bitter defeat for Trump.

Tillerson's testimony occurred under the unusual backdrop of unsubstantiated intelligence allegations concerning President-elect Trump and Russia. Tillerson's hesitance to condemn Putin for Russian support of Syrian President Assad's regime, which has cost the lives of hundreds of thousands, might be indicative generally of Trump’s softer approach towards Russia. During his press conference yesterday, while admitting that Russia was probably behind the election-related hacks, Trump steered clearof any harsh words or strong criticism.

The issue of US sanctions against Russia also drove tensions between Tillerson and senators on the foreign relations committee from both parties. A lifting of sanction could potentially permit large-scale exploration and exploitation of untapped Russian oil reserves, which might be of interest to the former Exxon CEO. A further question remains whether the new administration will decide to soften or abolish the diplomatic sanctions that President Obama imposed just a few days before his term expired, including the expulsion of over 30 Russian diplomats, which had infuriated Moscow.

His high-ranked position in ExxonMobil at the period while the company was paying millions of dollars to lobby against the Russia sanctions confronted Tillerson with numerous harsh questions from Democrats and Republicans over his role and conspicuous involvement in that strategy of the company on which Tillerson spent almost his entire career.

Nevertheless, the evidence that Exxon Mobil under Tillerson's leadership lobbied against Russia sanctions is clear and abundant. And that is probably the reason why Tillerson a few moments later during the confirmation hearing attempted to reformulate his answer by arguing that "the company never opposed sanctions per se, but merely engaged with Congress to understand how Exxon's business would be affected... Exxon Mobil participated in understanding how the sanctions are going to be constructed". Senator Chris Murphy countered Tillerson's response by mentioning that this is something which is hard to disprove but also "very, very hard to believe".

OpenSecrets, an influence-tracking organization, reports that Exxon Mobil lobbied repeatedly on the Ukraine Freedom Support Act of 2014, which sanctioned the Russian oil industry in retaliation for its invasion of Ukraine. Politico reported last month that "ExxonMobil successfully lobbied against a bill that would have made it harder for the next president to lift sanctions against Russia, clearing the way for the oil giant to restart a program worth billions of dollars if Donald Trump eases those restrictions as president”.