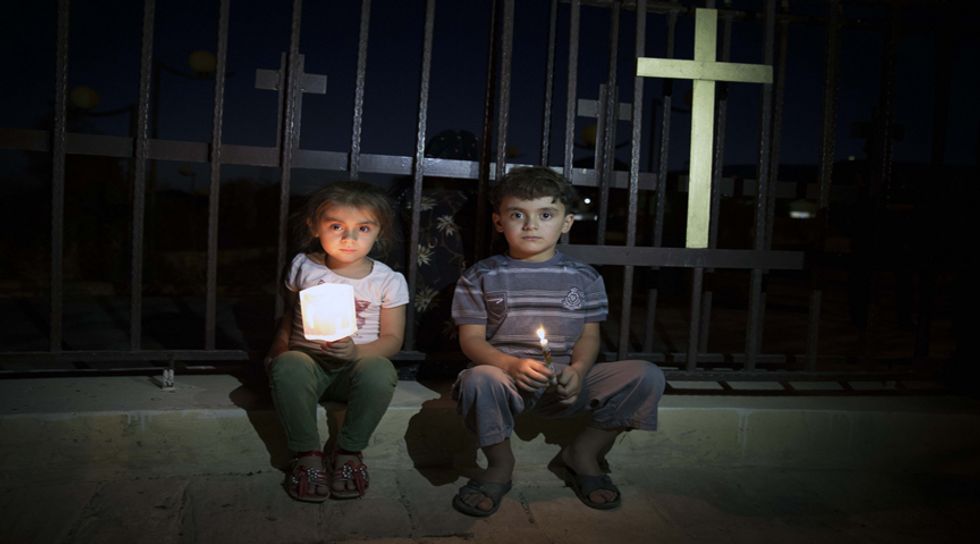 There is a crisis going on right now in the Islamic State of Iraq and Syria. Thousands of Yazidi girls and women are being isolated from their families and held in pens. They are being photographed and given numbers to advertise them to potential buyers before being auctioned off for a life of sexual slavery, to be raped at their “owner’s” will, all in the name of God. Those who refuse are killed. It is a modern-day slave ring, one not only sanctioned by, but encouraged by, ISIS governing structures. This is not something that happened hundreds of years ago. This is happening right now. Right now, women are being sold for as little as $75.

The buying and selling of women and children by ISIS has become so commonplace that the process has become heavily formalized. A question-and-answer document issued by what appears to be ISIS’s Research and Fatwa Department states “It is permissible to buy, sell, or give as a gift female captives and slaves, for they are merely property, which can be disposed of....”

The Islamic State has developed a bureaucracy around the practice, including the use of court-sanctioned sales contracts. The women are treated as any other piece of property, and can therefore be willed to another man or otherwise disposed of through contract. The victims can be set free through a Certificate of Emancipation, but this is rare.

ISIS bases their systematic selling and trading of women for sexual purposes on a narrow and selective reading of the Quran and the Sunna. They argue that Yazidi civilians may be enslaved because they are polytheists with an oral tradition rather than written scripture, and therefore are outside the protections of the Quran.

ISIS’s publications underscore the perceived religious underpinnings to the rapes, and profess disbelief that others—even internally—may disagree. As reported by the New York Times, one ISIS devotee wrote “What really alarmed me was that some of the Islamic State’s

supporters started denying the matter as if the soldiers . . . had committed a mistake or evil. . . . I write this while the letters drip of pride. We have indeed raided and captured the . . . women and drove them like sheep by the edge of the sword.”

Personal accounts also describe the deep religious undertones. Victims describe their assailants kneeling to pray before and after the rape. They also describe being met with religious justifications when they beg the attackers to stop. New York Times foreign correspondent Rukmini Callimachi reported, in an interview with Public Radio International, that the victims were told repeatedly “What we are doing to you is halal, what we are doing to you is allowed, and is not just allowed, but it is seen as good and virtuous in the eyes of God.”

Sexual Violence as a Recruitment Tool

One of the main motivations for ISIS’s systematic rape of young girls and women appears to be to recruit more men to join the movement. As Callimachi stated, the prevalence of sex slaves is “particularly appealing to men, for example, from Gulf countries, who come from a very conservative society where dating is taboo and casual sex is essentially forbidden, and where marriage is off bounds to people who don’t have a lot of means. . . . Within those strictures, you can see how this system, where you can come and essentially buy a poor girl for very little, would be a bonus.”

However, the sale of these girls and women are not confined to ISIS fighters. Senior UN official Zainab Bangura described a pamphlet advertising the ISIS sex trade, which markets the captured women and children to ISIS soldiers and wealthy businessmen. Prices range for $75 to $172, with children aged 1 to 10 priced at the high end of that range.

While human rights groups like Human Rights Watch and Amnesty International have called upon ISIS commanders to put a stop to this practice, if anything, it appears to be growing in size and in force.

Although sexually enslaving women and children has largely been confined to the Yazidi, Christians and Jews, who are also seen as unbelievers with limited protections under the Quran, are now also in ISIS’s sights. Recently a manual issued by ISIS’s Research and Fatwa

Department made clear that sex with Christian or Jewish women captured in battle is also permissible.

Violence against women and children who refuse to have sex with fighters is also escalating. As reported by Iraqi news, 19 women were executed earlier this month as part of a “penalty decision . . . [for their] refusal to participate in the practice of sexual jihad.” If ISIS continues to view these children and women as property, and remains emboldened in its  certainty that they are legally and religiously free to do with them what they will, this number will only grow larger.

Hope in the Aftermath

One promising practice has been the opening of the Jinda Day Care Center for Yazidi Girls by the Association for Crisis Assistance and Solidarity Development Cooperation (WADI), with support by UNICEF. The center “serves as a social and psychological safe haven particularly for women who were forced into slavery by the IS, but were able to escape.” In the center, women are offered language classes and skills training. Currently about 300 girls are being cared for by WADI.

One bright spot in the midst of all this violence has been the response of the Yazidi community. Traditionally, the Yazidi culture has stigmatized victims of rape, leading to the ostracizing or excommunication of victims of sexual violence. Yazidi religious leaders have been working hard to combat this view and help reintegrate the survivors. One religious leader, Baba Sheikh, issued the following appeal to the community: “These survivors remain pure Yazidis and no one may injure their Yazidi faith because they were subjected to a matter outside their control. . . . We therefore call on everyone to cooperate with and support these victims so that they may again live their normal lives and integrate into society.” Largely, the community has responded and has welcomed back survivors, in some instances even encouraging the use of available services.

For the girls and women who have found their way to freedom, there is hope. With the support of the Yazidi community and increased services, some may begin to find a path toward healing. But there still remain hundreds or even thousands held captive, bound by contract and religious justifications to their abusers. For these women, hope remains elusive, and the sexual violence continues unabated.