As Details Emerge on Dinner with Comey, Trump Goes Unhinged on Twitter 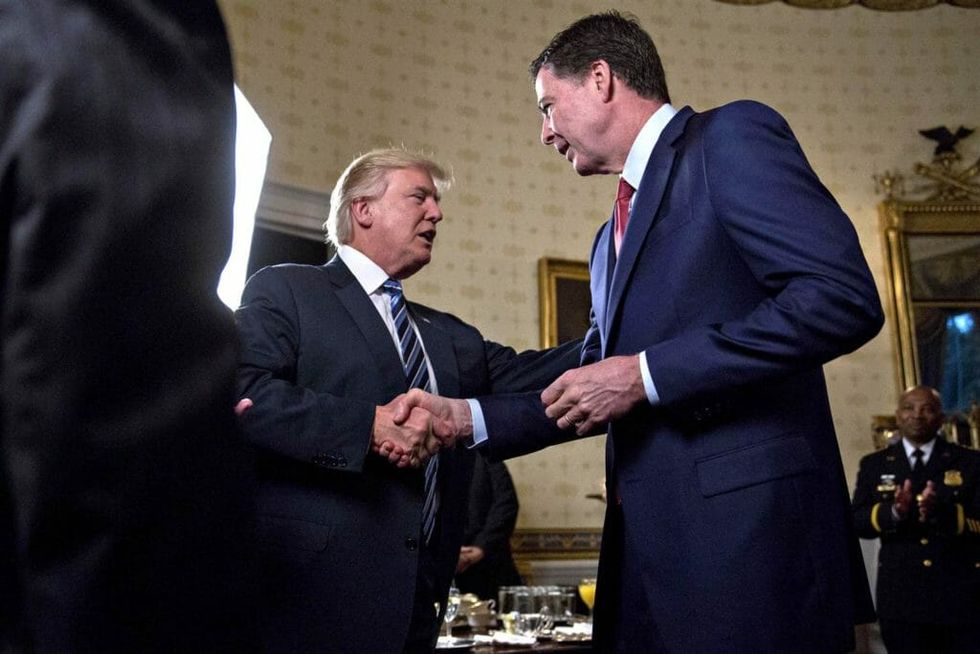 In January, President Donald Trump and former FBI Director James Comey had dinner together. That fact may be the only part of the evening on which both sides agree.

During an interview with NBC's Lester Holt, Trump told the story first. In response to Holt's questions about when Comey told the president he was not under investigation, Trump replied with his version of the meeting.

TRUMP: I had a dinner with [Comey]. He wanted to have dinner because he wanted to stay on. We had a very nice dinner at the White House

HOLT: He asked for the dinner?

TRUMP: A dinner was arranged, I think he asked for the dinner. And he wanted to stay on as the FBI head. And I said I'll you know consider and we'll see what happens. But we had a very nice dinner. And at that time he told me you are not under investigation.

However, Comey was in the midst of his 10-year term as FBI director, a position that traditionally does not send a letter of resignation to the incoming president during an administration change. It seems unlikely to many that he would have asked for a meeting to ask to keep his job. In fact, only one previous FBI director had ever been fired from the job.

FBI sources close to Comey have called the president's account into question.

In accounts from The New York Times and NBC, unnamed sources close to Comey have disputed almost every detail about the dinner. Their accounts say that Comey was "summoned" to dinner with Trump, and that Comey did not want to attend but felt he could not deny his boss.

"The president is not correct," the former official said. "The White House called him out of the blue. Comey didn't want to do it. He didn't even want the rank and file at the FBI to know about it."

But in the end, "He's still the commander in chief. He's your boss. How do you say no?"

But the most troubling part of the account is the dinner conversation. According to the Times, after small talk, Trump asked Comey to "pledge his loyalty." Comey replied that he would not, but that he would be honest. Later that evening, Trump pressed Comey again.

NBC's source also disputed Trump's claim that Comey told him he was not under investigation. "He tried to stay away from it. He would say, 'look sir, I really can't get into it, and you don't want me to.'"

During a press briefing, Trump's spokesperson, Sarah Huckabee Sanders disagreed with both the story about the dinner and questions about the president acting improperly. "I don't see it as a conflict of interest," she said. "We've talked to several — again, several — legal scholars have weighed in on this and said that there was nothing wrong with the president asking that question."

This morning, Trump took to Twitter to voice his displeasure at the emerging details, warning that "James Comey better hope that there are no "tapes" of our conversations before he starts leaking to the press!