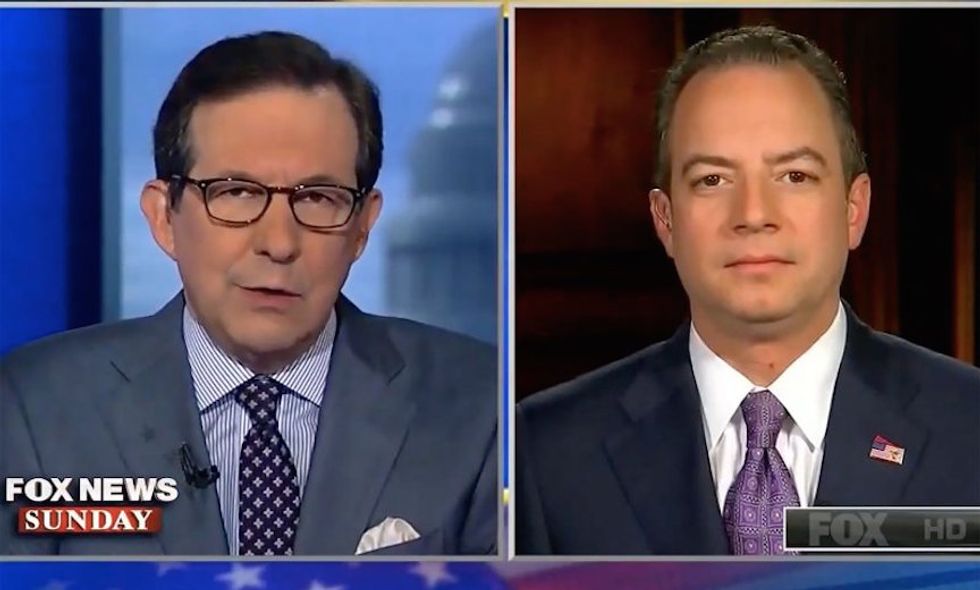 President Donald Trump has been roundly criticized by pundits and media alike for his tweet calling the New York Times, NBC, ABC, CBS, and CNN  "the enemy of the American people." Fox News, on the other hand, has been mentioned positively by Trump. Given that, Trump's chief of staff, Reince Priebus, probably did not expect the grilling he received from Fox Sunday's host, Chris Wallace.

Wallace appeared first on Fox & Friends prior to the Preibus interview, in a segment where his fellow Fox broadcasters attempted to put a more positive spin on the president's remarks. Wallace disagreed with many of their comments. In response to a discussion of the history of presidential criticism of the press, Wallace responded with a quote from Thomas Jefferson:

“And were it left to me to decide whether we should have a government without newspapers, or newspapers without a government, I should not hesitate a moment to prefer the latter.”

“Yes, presidents have always had — and politicians have always had — problems with the press. They want good press. The press doesn't always give it to them. But what Jefferson [was saying] is, despite all of our disputes, that to the functioning of a free and fair democracy, you must have an independent press,” Wallace went on to say.

He also pushed back against the claim that "fake news" is another way of saying biased news. "Lord knows, Barack Obama criticized Fox News. If Donald Trump wants to criticize the New York Times, that’s fine. But it’s different from saying that we are an enemy of the American people. That’s a different thing.”

Priebus: "He said a lot of things about Fox News, Chris. I think you ought to go check the tape. He took plenty of shots."

Wallace: "No, he took the shots, and we didn't like them, and frankly we don't like this either. But he never went as far as President Trump has, and that's what's concerning, because it seems like he crosses a line when he talks about — that we're an enemy of the people. That is concerning."

This is the second time this week that Fox News has criticized the president. Earlier this week, Shepard Smith admonished President Donald Trump for his performance and comments at the impromptu press conference on Thursday.

Smith addressed the president directly, taking on Trump's evasion of questions about the administration's relationship with Russia. "We have a right to know. We absolutely do, and that you call us 'fake news' and put us down like children for asking these questions on behalf of the American people, is inconsequential," said Smith. "The people deserve that answer, at very least."

Wallace asked Priebus about Russia as well. Priebus denied the reports on the basis that the sources were anonymous, "If you're going to come out with a story that says Russian spies are talking to your campaign, my God. I mean, I think you should in some cases, or in most cases, actually have a named source." Anonymous sources are particularly common in stories that could result in the source being fired for sharing information with the media.

You can see Wallace's interview here: