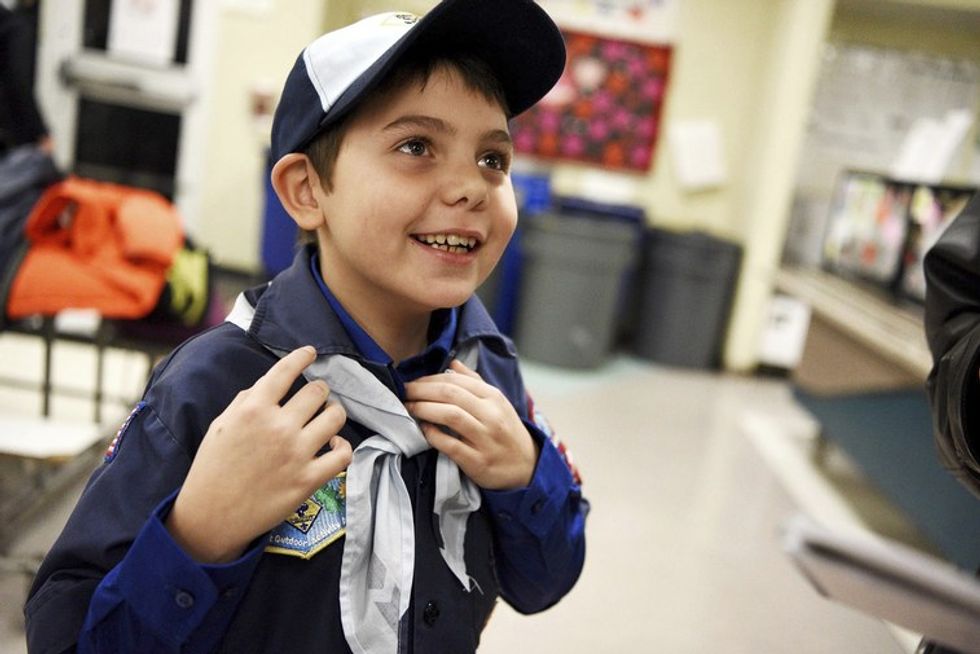 Nine-year-old Joe Maldonado was initially barred from the Boy Scouts of America after the Northern New Jersey Council of the Boy Scouts made him leave his Cub Scout troop a mere month after he joined.

Maldonado — a transgender boy who hails from Secaucus, New Jersey — probably never imagined that his gender identity would play such an immense role in the decision-making process of the Boy Scouts of America, but neither did he predict he would lose his spot in his pack because he was born female.

“It made me mad,” said Maldonado. “I had a sad face, but I wasn’t crying. I’m way more angry than sad. My identity is a boy. If I was them, I would let every person in the world go in. It’s right to do.”

It was no secret that Maldonado had come out as a boy; he had been living as a boy for over a year, including at school.

In fact, according to Maldonado, none of the other Cub Scouts protested his membership. "Not one of the kids said, 'You don’t belong here.’”

Until recently, the Boy Scouts of America declined to state whether it had a written transgender policy. Effie Delimarkos, the communications director of the organization, did state that Cub Scouts are for boys age 7-10, and that confirmation of legal status is derived from “the classification on the participant’s birth certificate.” No further details were provided.

Since there was no real policy regarding the issue, the Boy Scouts previously deferred to an individual’s birth certificate to determine membership eligibility for its single-gender programs. Yet Justin Wilson, executive director of Scouts for Equality, says that he does not know of any instances in which the Scouts actually asked for a birth certificate as a requirement for membership.

Comparatively, the Girl Scouts of the United States of America, an organization unconnected to the Boy Scouts, directly answered questions regarding transgender members, explaining on their site, “Placement of transgender youth is handled on a case-by-case basis, with the welfare and best interests of the child and the members of the troop/group in question a top priority. That said, if the child is recognized by the family and school/community as a girl and lives culturally as a girl, then Girl Scouts is an organization that can serve her in a setting that is both emotionally and physically safe.” In other words, any child recognized as a girl by her family and community, and who “lives culturally as a girl” is allowed to join, according to the Girl Scouts website.

Thanks to Maldonado’s case and pressure from LGBT groups, however, the Boy Scouts of America reversed its century-long policy on January 30 and began accepting members based on the gender listed on their application.

“After weeks of significant conversations at all levels of our organization, we realized that referring to birth certifications as the reference point is no longer sufficient,” Michael Surbaugh, the chief executive of the Boy Scouts, said in a recorded statement.a

In 2016, the Boy Scouts told The Associated Press that it would admit transgender children to coeducational programs, but not to programs exclusive to boys. The Scouts have not specified whether the organization would accept a transgender girl whose birth certificate states she is male.

This new decision to allow transgender boys into all facets of the organization on the part of the Boy Scouts came in a particularly contentious five-year period, after the Scouts ended its ban on openly gay youths in 2013, as well as its ban on openly gay troop leaders in 2015. It also comes less than three months after Maldonado was kicked out of his Cub Scout group.

According to Wilson, the organization is not known to have rejected any individual over gender identity prior to Maldonado, so Maldonado is therefore the only known Scout granted readmittance as the first openly transgender Boy Scout.

“I think it’s pretty cool that I get to go back in,” Maldonado, who is now nine, said after he was readmitted into the Scouts. “I had a lot of fun.”