Does Washing Your Fruits and Veggies Remove These Hidden Chemicals?

Washing your fruits and veggies may not make them safe to eat. 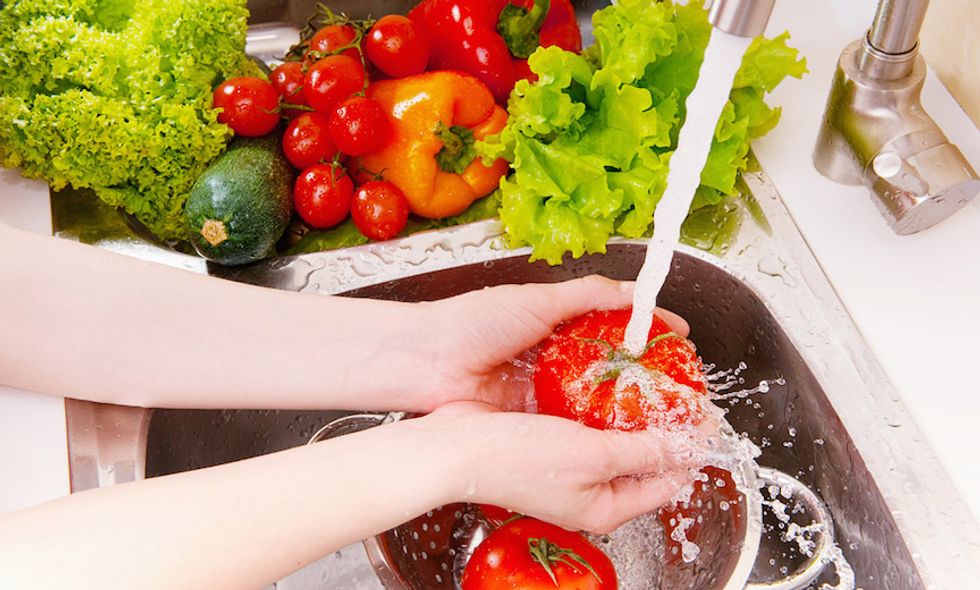 When you bring home your gleaming bags of fresh fruit and vegetables from the market, you might give them a quick rinse under the tap before you proceed to eat. Unfortunately, rinsing in water, or even peeling, only removes surface residue. It can’t remove traces of pesticides or industrial chemicals used in pre-consumer washing and processing. Pesticides are chemicals used to kill pests, including insects, rodents, fungi and weeds that damage crops. They can also pose toxic threats to human health.

To help consumers educate themselves, the Environmental Working Group (EWG), a nonprofit environmental research group based in Washington D.C., recently released itsannual pesticide report which includes a Shopper's Guide to Pesticides in Produce. The EWG Shopper's Guide ranks pesticide contamination of popular fruits and vegetables on more than 36,000 samples of produce tested by the U.S. Department of Agriculture (USDA) and the Food and Drug Administration (FDA). This year, they found that nearly 70 percent of samples of 48 conventionally grown types of produce contained pesticide residue. Washing did not remove the pesticides, nor, in many cases, did peeling.

The guide includes a list called the Dirty Dozen, which lists the produce with the highest amount of pesticide residue, and the Clean Fifteen, the produce that contains the least pesticide residue. This provides a good guide for people who want to consume fewer pesticides but can't afford organic produce.

According to theWorld Health Organization, pesticides are potentially toxic to other organisms, including humans, and need to be used safely and disposed of properly.

However, the term pesticide is a bit misleading. “The definition of a pesticide is something that kills a pest,” according to Kristin Schafer, Policy Director for the Pesticide Action Network of North America (PAN), a public safety group that helps consumers educate themselves and attempts to influence policy. What consumers need to be wary of are the

synthetic pesticides, namelyneonicotinoids and organophosphates. Neonicotinoids are chemicals often applied to the soil the plant is grown in, or the seed itself, and thus taken up by the plant in its growing process. These cannot be washed away by water because they’re imbued within the plant itself.  Organophosphates are not systemic, and its use is highly regulated in the U.S. but it in large quantities they are highly toxic to human health, even fatal,attacking the nervous system in a similar way to the deadly nerve agent, Sarin.

The alarming thing about these classes of chemicals, says Schafer, is that as the science becomes more sophisticated, scientists are discovering that once safe levels of even approved chemicals may not be so safe after all. One of these chemicals has been in the news lately,chlorpyrifos, a product of Dow Agrosciences. This insecticide has been used since 1965 because it works well against mosquitoes, cockroaches and fire ants. However environmental and advocacy groups have rallied the EPA to deem it unfit for human consumption. “It has been linked to neurological damage in children. As research progresses, they’re finding lower and lower levels can cause harm to health. It doesn’t take much of these chemicals to throw off the balance [of our health],” Schafer says.

Despite research done by the EPA itself finding that the chemical is harmful, the new EPA director, Scott Pruitt, hasrefused to ban the widely-used chemical, much to the dismay of public safety groups.

“The other frustrating problem from our perspective as public interest group is that the standards are set one chemical at a time, but the reality is your one apple might have between three and seventeen chemical residues on it,” Schafer says.

Beyond concerns over pure exposure to these chemicals, PAN and others are concerned about how these many chemicals may interact with one another, and what effects that could be having on human health. ‘The standards aren’t set to take that into consideration at all, it’s a huge gap.”

And there’s another consideration for pesticide exposure. PAN devotes a lot of work to the issue of how the pesticides applied to crops affect the local (often rural) communities nearby, particularly school children, whose brains are still developing and are thus most susceptible to the effects of these chemicals. “We help people make those connections about the choices you’re making about choosing the food with less pesticides, which is also helping the children in those communities where the pesticides are applied.” Those pesticide-adjacent families are exposed to higher quantities of these chemicals not only in their food, but in their air and water. She cites a study done by the California Department of Health that looked at what pesticides are used within quarter of mile of schools and found significantly higher amounts.

While it’s true that organic growers do use pesticides, Schafer makes clear that there are very strict organic standards of chemicals and biological controls allowed under theNational Organic Standards. “The list does not include any of the synthetic pesticides that

are acutely toxic or have environmental effects whether it’s on bees or fish,” she says. Very strict criteria for allowing any product on that list. However, consumers may not want to ingest even natural soaps and insecticides. Here is where it may be worth your while to rinse them off.

Organic pesticides may be less harmful but there are studies that say even the organic pesticides may be carcinogenic,” Jason Sonners, New Jersey based chiropractor, certified nutritionist, and author of Wellness to the Core, tells Second Nexus. “We want to ingest them as little as possible. Rising them off or wiping them on your shirt is not enough.” In his wellness center, Core Therapies, where he works as a chiropractor and nutrition counselor, he recommends washing organic fruits and veggies in a vinegar base with a general guideline of one third white vinegar to two thirds water. “That should get most if not all the waxes and herbicides off.”

How can consumers protect themselves?

In order to limit the amount of chemicals you ingest, Schafer recommends buying organic fruits and veggies when you can. PAN has a useful educational website,WhatsOnMyFood.org, where you can click on your fruit or vegetable of choice, be it almonds or asparagus, for both organic and conventional produce, to find out which pesticides, and in what quantities, the FDA and USDA have found.  Since not everyone can afford organic produce, Schafer says this can be a helpful way to determine which products you can get away with eating on a more regular basis, and which to always purchase organic.

In addition to the pesticide problem, William Emkey, PhD, a physicist turned consultant and food safety advocate, and Founder of ChemFree DeFoam LLC, says there’s another chemical that the consumer won’t find on food labels. In food processing plants, when an apple or a potato, for instance, comes in for processing, it must first be washed. Washing creates huge quantities of foam. “If you did not control the foam as the process of washing, cleaning, peeling and slicing takes place, the foam grows would literally shut down these factories and chase you out,” Emkey tells Second Nexus. In order to control it, historically companies have used a chemical called dimethylpolysiloxane, used in caulks, adhesives and even silly putty. Because this chemical is not technically a food additive, it doesn’t have to be labeled, nor do consumers have to be alerted at all.  “Consumers can’t read this chemical on a label. The only way for a consumer to prevent these chemicals from being added to their food is to stop companies from adding them,” he says.

Moreover, the companies aren’t doing anything illegal, he says. These are FDA approved chemicals. The problem is, he says, many of the safety studies on these chemicals don’t look at all stages of the chemical. “The testing was done on the base chemical, never on the chemical that was heated. If you really want to test safety, you want to test the safety of what people are ingesting.” In this case, when dimethylpolysiloxane is heated, it can create formaldehyde, a “probable carcinogen,” he says, and not something consumers want to be ingesting. “People don't want to eat chemicals; they want to eat natural food.”

In fact, the answer to avoiding unnecessary chemicals may be the simplest strategy: “Get stuff out of the ground and eat it. Pick it off the tree and eat it,” Emkey says.

What You Can Do

Other than simply protecting your own family by making better food choices, Schafer urges everyone concerned about these issues to get involved in advocacy and policy efforts. “There are groups doing really great work to push for better policies at the state level,” she says, including getting funding to farmers to switch away from these chemicals, create pesticide buffer zones, or protecting bees from pesticides.

“Folks interested in these issues can plug in and get involved, and that helps us all in the long run,” Schafer urges. “It takes more than just being a smart shopper but thinking about how to help change things.”