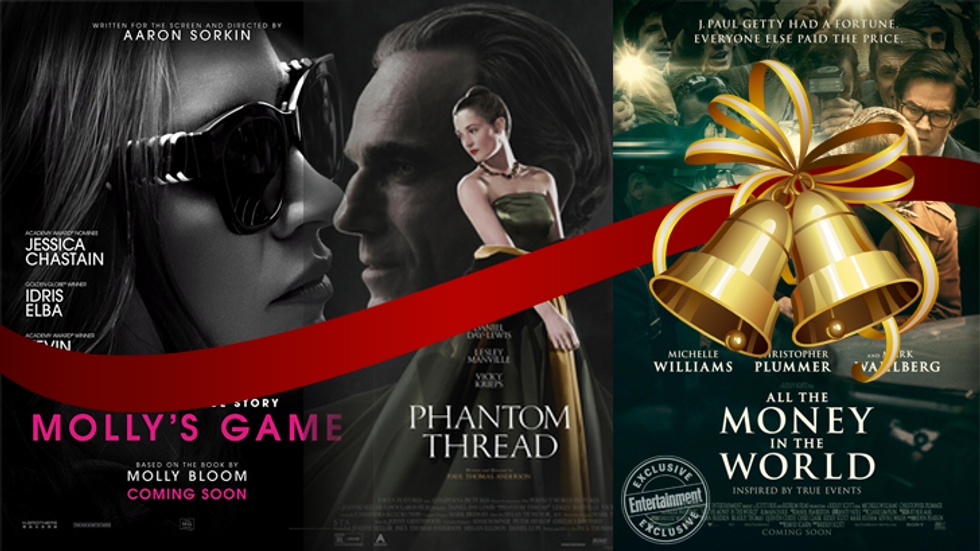 After the presents are all opened and the Christmas festivities have subsided a bit, finding a means of passing the time on Christmas Day can oft be difficult. Most stores are closed, catering to the celebrations of the holiday season, leaving those that don’t recognize Christmas with few options for entertainment. Annually, however, Hollywood tends to pull through by releasing at least one new movie on Christmas Day.

For the 2017 Christmas season, there are three new movies releasing on Dec. 25. Molly’s Game, All the Money in the World, and Phantom Thread were all featured earlier in the year, either at film festivals or exclusive screenings. Each film falls under the category of drama or thriller, giving people that need an escape from the holiday merriments an outlet on an otherwise holly jolly day.

Starring Jessica Chastain and Idris Elba, this Aaron Sorkin-directed crime drama is based on Molly’s Game: From Hollywood’s Elite to Wall Street’s Billionaire Boys Club, My High Stakes Adventure in the World of Underground Poker.

The memoir, written by Molly Bloom, follows her time as an FBI target for her successful underground poker ring for luminaries. The film first debuted at the Toronto International Film Festival in Sept. of 2017 and has since earned Critics’ Choice Awards and Golden Globe Awards nominations.

Molly's Game is receiving a limited release on Christmas Day and will be releasing worldwide on Jan. 5. To see if it's playing at your local theater, visit the movie's website.

All the Money in the World

Ridley Scott’s crime thriller based on John Pearson’s Painfully Rich: The Outrageous Fortunes and Misfortunes of the Heirs of J. Paul Getty made headlines when Scott opted to recast Kevin Spacey amidst sexual assault allegations. Despite the film being completed, Christopher Plummer was cast in the role of J. Paul Getty and all of Spacey’s scenes were reshot.

All the Money in the World first premiered at the Samuel Goldwyn Theater in Beverly Hills, CA on Dec. 18, 2017, and has since been nominated for three Golden Globe Awards.

Daniel Day-Lewis and Lesley Manville headline this 1950’s historical drama, which follows the couture movement through London. Day-Lewis portrays Reynolds Woodcock, the fictional dressmaker, in what he claims to be his final role before retiring from acting.

After premiering on Dec. 11, 2017, at the Walter Reade Theater, Phantom Thread has been nominated for more than 50 awards. Though many of them are still pending, it has already won 18 of them.

Christmas Day may be a little light on the new releases, but December has played host to a slew of anticipated titles that will still be in the theaters come Dec. 25. Other movies that moviegoers can watch during Christmas include:

For local movie times, use Fandango.com and search via your zip code.