Polls are important to former President Donald Trump. They're what he defied in 2016 in his upset victory against Democratic nominee and former Secretary of State Hillary Clinton. They're what he currently cites as evidence of Americans losing faith in President Joe Biden, who defeated him in 2020. By the time his Twitter account was banned for inciting an insurrection, he'd tweeted some iteration of the word "poll" more than 800 times.

That's why a new poll from CBS News/YouGov may have the former President worried.

Trump remains the figurehead of the Republican party, enjoying widespread approval from Republican voters while GOP elected officials who step out of line face censure and even calls for violence, regardless of their status in the party before. A major source of national speculation is whether or not Trump will run for reelection in 2024, and it was one of the primary questions asked in the poll.

Perhaps unsurprisingly, the vast majority of Republicans want Trump to run for reelection, but that majority doesn't extend to all Americans.

According to the poll, the vast majority of Americans—more than 60 percent—think Trump should stay out of the 2024 race. 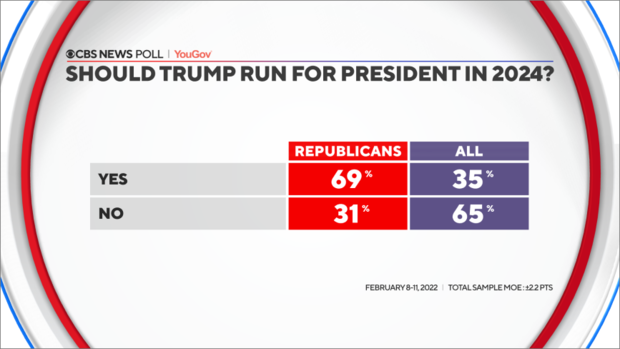 The former President has repeatedly railed against Vice President Mike Pence for not succumbing to Trump's demands he defy the Constitution and refuse to count the electoral votes of swing states Trump lost. However, 66 percent of Republicans said Pence did the right thing in by counting the votes.

When it comes to Republicans seen as "disloyal" to Trump, a plurality of GOP voters—48 percent—said the party should accept their views and do nothing. Forty-two percent said the party should endorse their primary opponents, a tactic Trump has repeatedly employed over the past year.

Others want to know just what's wrong with 35 percent of Americans.

Wtf is wrong with the 35%? They need some serious intervention and psychological help
— 1ChiefsDan (@1ChiefsDan2020) February 15, 2022

As legislation to reform the Electoral Count Act to remove any room for confusion on whether the Vice President can essentially decide an American election, other social media users were heartened that Republican voters sided with Pence's decision to do his literal job and count certified electoral votes.

It was the right decision. Glad a majority of Republicans agree. https://t.co/KrCk87k53Q
— Danny Horton (@DannyHortonMO) February 15, 2022

But 2024 is a long way out, and it remains to be seen how these attitudes will change.