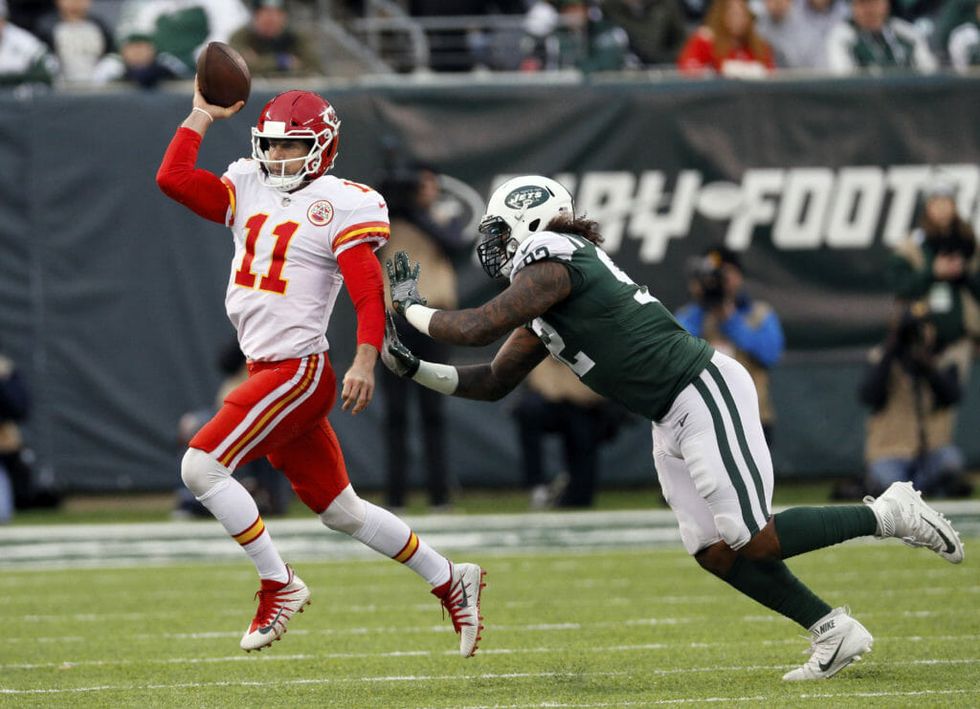 Welcome to the week 14 edition of NFL DFS 5 Starts and 5 Fades! Last week our core was good enough to build up our cash-game bankroll, but Jordan Howard’s disappointing performance kept us from major tournament cashes. After researching for this week, I am confident we can keep our cashing streak alive. We’ve got five core plays and five fades ready for you; hopefully they'll help you decide who to start and fade in daily fantasy. Grab your coffee, settle in and let’s get started!

During this article you will often see references to DVOA (Defense-adjusted Value Over Average). It's a metric from Football Outsiders that measures a team or players efficiency by comparing results from every play to a league average based on situation and opponent. For example, if an offense runs for 4 yards on a 3rd and 3, it will be weighted and graded more favorably than if an offense runs for 4 yards on 3rd and 15.  DVOA is a better way to compare team’s offenses vs opposing defenses than more traditional stats like yards gained and allowed.

The Chiefs have three of the most explosive athletes at their positions in Kareem Hunt, Tyreek Hill and Travis Kelce. However, the Chiefs have been running so few plays per game that the speed and talent of their stars were negated. In week 13, head coach Andy Reid "benched himself." He then gave offensive coordinator Matt Nagy play-calling duties against the New York Jets. The results were encouraging, as the Chiefs led the league in pace at only 22.4 seconds between plays. Kelce and Hill both caught two touchdowns, and all of the stars touched the ball more. This week, the Chiefs take on the 32nd-ranked DVOA pass defense in the Oakland Raiders. I think this game has shootout potential; Alex Smith is in a tremendous spot this weekend. I prefer his price on Draft Kings, but will use him on both sites.

This play is contingent on running back Joe Mixon missing this game with a concussion. If he does, Giovani Bernard will most likely be the highest owned player on the weekend. The Bears are a mess as a team right now, which puts Cincinnati in a position to control this game. Bernard did well last week in his 13 carries and two catches, most of the work coming after Mixon left the game. The Bengals grade out as a poor rushing offense, but the price is too good to pass up on Giovani Bernard on either site this week.

If Joe Mixon does play, Lamar Miller may very well become the best running back value on the board this week. He is a good bet for 20 touches, and takes on a San Francisco team that ranks 29th in the league in fantasy points allowed to running backs. Furthermore, the 49ers have the 20th ranked DVOA run defense in the league. Heading into last week, the 49ers allowed the second most snaps to opposing offenses. Houston is 10th in the league in rushing yards per game, and the volume should be locked in for an underpriced Lamar Miller.

Welcome back to the NFL, Josh Gordon. After not playing football for three years, Gordon came back to a workload of an extraordinary 11 targets. Josh ended his day with four catches for 85 yards, as he faced two cornerbacks currently ranked in the top 13 at their position. The best news from last week is that Gordon immediately came back and registered a market share of 34% of Kizer’s throws. This week, he faces a much weaker Green Bay secondary. Advanced metrics like Air Yards suggest that Josh Gordon will have huge performances on the regular, as he accounted for 210 yards on his 11 targets.

After losing consecutive seasons with nasty injuries, Allen is back to his all-pro form. He had three consecutive weeks of 10+ catches, at least 100 yards, and a touchdown. That's the first time in NFL history this has happened. During his streak, Allen is averaging 145.3 receiving yards per game. If he posts another 10+ catches and 100 yards this week, he will be in rare air, joining Calvin Johnson as the only player in history to ever accomplish such remarkable numbers. The Redskins secondary is good, but the Chargers open as six-point favorites. This implies they will have no problem scoring, and Keenan Allen will be in the middle of it all. Quarterback Philip Rivers mentioned they have always wanted to push Keenan Allen the ball, and he will try and continue to do so.

Russell Wilson is a great quarterback and a clutch player. This week, he has literally the worst matchup possible in traveling to Jacksonville to play the Jaguars. The Jaguars possess the first-ranked DVOA pass defense, and have star players at every level of their defense. They lead the league in sack rate, and possess the best cornerback duo in the league. For this reason, I also want no part of…

Another week of avoiding wide outs against the Jacksonville Jaguars defense. The Jaguars boast the first-ranked DVOA pass defense and arguably the best corner tandem in the league. Even with his Draft Kings price depressed for the matchup, I would much rather spend $100 more from Josh Gordon, as Gordon was targeted 11 times in his anticipated debut, and instantly needs to be considered a top 15 wide receiver going forward.

DeMarco Murray will be hands off for me this week; he takes on the fourth-best DVOA run defense in the Arizona Cardinals. Also, he is in a full split of the workload with Derrick Henry in the Tennessee backfield. The only reason Murray continues to maintain a small lead in touches is because of his receiving skill out of the backfield. However, Henry looks like the more talented player on game film, and is one of the rarest size-speed combinations you will find. I would only be using Murray as a deep contrarian play in a large field tournament.

Mike Evans will be on very few, if any, of my daily fantasy rosters this week. He takes on a Detroit team that is the fourth-best at stopping the opposing team’s best wide receiver, and his targets have been way down. Also, we are over a calendar year since Evans had his last 100-yard game. Furthermore, quarterback Jameis Winston threw the ball to 10 different pass catchers last week. When spending up at wide receiver in daily fantasy, I want more guaranteed targets. At the same price range, I would much prefer Tyreek Hill in every format.

Kyle Rudolph has been a safety blanket in one of the league’s more efficient offenses this year. This week, however, he takes on a Carolina team that allows the second fewest fantasy points to tight ends, and has the eighth-best DVOA pass defense. Even though it is almost Christmas time, I will not have Rudolph leading my daily fantasy sleigh this week. Instead look at Hunter Henry and Evan Engram at your tight end positions.

Thank you for reading the week 14 edition of 5 Starts and 5 Fades. Hopefully, these plays give you an edge in your daily fantasy contests. As always, check back next week for a quick review of week 14, and the top plays for week 15. Go crush this week!