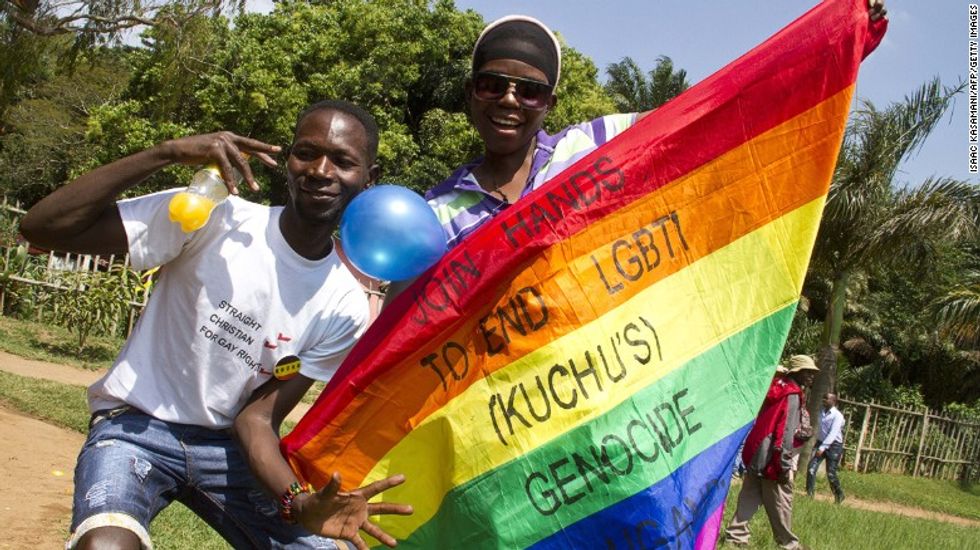 Violent anti-LGBT hate crimes have been on the rise throughout Africa. In a series of attacks in Kenya, mobs have slashed gay men with machetes and beaten them with hammers. In South Africa, a group of five men gang-raped a gay man then set fire to his bed while he was in it, while a 26-year-old lesbian was found dead with a toilet brush shoved in her vagina. But terrifying as these incidents are, the most horrific reports of concerted anti-gay violence and persecution have come out of Uganda.

In 2009, authorities in Uganda began debating an Anti-Homosexuality Act, which threatened LGBT persons with life imprisonment and even execution for the “crime” of being gay. Sexual Minorities Uganda (SMUG), a coalition of organizations advocating for the protection of LGBT Ugandans, began recording and reporting abuses arising from that proposed law. Frank Mugisha, SMUG’s Executive Director, reported that, as a result of the bill’s consideration “People are calling the police [with names of suspects] and harassing others in the streets.”

When the law passed in 2014, reports of anti-gay incidents increased tenfold. In May 2014, SMUG issued a report detailing attempted lynchings, mob violence, home torchings, blackmail, firings, arrests, evictions and suicides. Tabloid newspapers also joined in the fray, publishing 29 stories outing hundreds of LGBT individuals, which led often to further violence and familial shunning. For the first time, anti-LGBT hate crimes became officially sanctioned by, and in several cases carried out by, Ugandan authorities. SMUG recorded that “[m]ore than 40 percent of the incidents included intimidation by state authorities, intrusion by the press, blackmail, or arrest.”

In one case, Ugandan authorities arrested Maurice Okello, 22, and Anthony Oluku, 18, claiming they were caught “red-handed engaging in homosexuality” in the northern town of Oyam.

Authorities jailed and tortured the men, subjecting them to “degrading and humiliating treatment” at the hands of police doctors charged with gathering evidence of homosexual acts, even though both already had “admitted” to them. The local police commander declared that the doctors had “proved beyond doubt that [Okello and Oluku] have been practicing it for long” because “they had scars” in their anuses.

Writing in The Guardian in 2014, Mugisha made a strong case that Uganda’s Anti-Homosexuality Act, and the hatred that drove it, stemmed directly from outside influences. “I want my fellow Ugandans to understand that homosexuality is not a western import,” he stated. But he insisted that he wanted “our friends in the developed world to recognize that the current trend of homophobia is" a western import. He has cause for this belief.

A man stands before an Ugandan crowd, thundering that “Western agitators” are unraveling the nation’s social fabric by spreading "the disease" of homosexuality to Ugandan children.

The man is an American pastor, Scott Lively, whose message, broadcast across Ugandan television, warns of the "hidden and dark" gay agenda that wants to “defeat the marriage-based society” and crush anyone who opposed it. First, as is common to  such practices, he dehumanizes his targets: Human rights shouldn't be extended to predators who recruit children. Gay men are sociopathic, devoid of mercy or compassion, Lively warns. Artfully, he draws comparisons between gays and the Nazi Party, between gays and the Rwandan genocide. The crowd roars its approval.

In April 2009, the first draft of Uganda's anti-gay bill emerged, making homosexuality punishable by death in the case of “aggravated homosexuality” (for repeat offenses or cases when one partner is underage or HIV positive). Lively’s influence was in every line.

The preamble even echoed his primary arguments about the threats gays supposedly pose to society.

Lively does not shy from the fight, and he has been explicit about his tactics. In his writings, he outlines detailed tactics for battling the rising acceptance of homosexuality, and he is unafraid to play dirty. "Public sympathy for 'gays' as victims is not grounded in logic, but in emotion," he wrote.

From His Lips to the Law

In February 2014, the Ugandan government, under the controlling hand of President Yoweri Museveni, signed the AHA into law, making homosexuality a crime punishable by death. Museveni acknowledged that this legislation was inspired, in part, by fears that “arrogant and careless western groups” would come to Africa in an effort to “recruit young children into homosexuality"—precisely the argument advanced by Lively.

Taking its cue from the new law, a popular Ugandan tabloid printed names, photos, and addresses of 200 alleged homosexuals, inciting a wave of anti-gay violence. Religious leaders called over public address systems for gays to be burned and beaten.

Lively did not appear dismayed by the violence, nor did he consider himself in any way responsible. In a February interview with National Public Radio, Lively shrugged off the allegations. "The gay movement has really brought this on themselves,” he said.

The Gay Agenda of Scott Lively

Lively, a long time veteran of the culture wars in Oregon where his particular brand of hate failed to take root, knew that in Uganda, his words would fall on more receptive ears. The country already was predominantly Christian, considered to be deeply religious and protective of traditional family structures, and long hostile to homosexuality.

Through his work, Lively achieved in Uganda something he was unsuccessful at creating back home: a regime where terror and hatred are fomented freely, because no one dares mount a challenge. Anti-gay bills introduced throughout the rest of Africa (and in other bastions of extremism such as Russia, where Lively and his ilk wield significant influence) always first aim to shut down any meaningful opposition. Indeed, the mere voicing of any protest itself becomes suspect as a violation of the law and a cause for arrest.

The law even provides for penalties of up to life imprisonment for anyone accused of “aiding and abetting” homosexuality. That charge can reach as far as the lawyers of the accused or to a witness, rending legal assistance itself extremely difficult. And any outsiders who conceivably might sway public opinion—for example, authors or playwrights who might dare to portray sympathetic gay characters—are summarily thrown out of the country.

Aldo Soligno, an Italian photographer who solicited locals for a photo essay about the struggles faced by gay Ugandans, unsurprisingly had a difficult time finding subjects willing to be identified.

The ones who agreed to show their faces did so only because a local tabloid already had “outed” them, Soligno said. These victims walk a fine line between wanting the international community to know what they are experiencing, while understanding that most real change must come from within the country.

But Ugandan LGBTs are not taking Lively’s actions entirely lying down. SMUG sued Lively in the U.S., acknowledging that Ugandan courts could not exercise jurisdiction over him while he remains in the U.S. They allege Lively conspired to deprive LGBT Ugandans of basic human rights by whipping the public into a frenzy of fear and hatred. The suit falls under the Alien Tort Statute, which provides federal jurisdiction by a foreign national for a tort “committed in violation of the law of nations or a treaty of the United States.” In this case, the crime is “persecution”-- defined as the “intentional and severe deprivation of fundamental rights contrary to international law by reason of the identity of the group or collectivity.”

Critics of the suit charge that SMUG is trying to suppress Lively’s freedom of speech and right to proselytize his faith—an ironic argument, given Lively’s own tactics aim first to stifle freedom of speech. Lively took aim at the claims, contending lack of causation: “SMUG is attempting to leverage a small catalogue of misrepresented and out-of-context comments by me, the independent actions of a few Ugandan leaders regarding their own national public policy, and a tiny handful of relatively minor incidents of ‘persecution,’ into Crimes Against Humanity”—a human rights violation of the highest order.

But Judge Michael Ponsor, the presiding judge, refused to dismiss the case, ruling in 2013 that, despite evidence Uganda remains rife with anti-gay activity, Lively could still be held liable for initiating widespread persecution: “[T]he fact that a group continues to be vulnerable to widespread, systematic persecution in some parts of the world simply cannot shield one who commits a crime against humanity from liability.” Just days ago, the First Circuit Court of Appeals affirmed the judge's ruling, setting the case to proceed to trial.

Legal developments back in Uganda also show some hope. On August 1, 2014, Uganda's Supreme Court struck down the anti-homosexuality law on a technicality, perhaps finally acknowledging the extent of the international outcry against the law.

Richard Lusimbo, research and documentation manager for SMUG, reports a slight change in attitudes since the bill was struck down.

“When the law was in effect, so many people were living in terror, in fear. People were forced to go back into the closet. People were even scared to access health services, because they didn't know if their doctor or service provider would hand them over to the police," Lusimbo points out. Now, though there are still many violations, “[P]eople are willing to provide these services. And LGTB people themselves are willing to get back in the public space, feeling a bit more relaxed and free.”

Uganda plans to introduce a new anti-gay law worded strategically to not explicitly refer to homosexuality, but instead call upon existing penalties for “unnatural acts.” The Ugandan government believes that this phrasing will circumvent any anticipated legal challenge. Ministers have indicated their hope to pass the bill in time to be a "Christmas gift" for Ugandans.

The new bill, which has not yet been approved by the Ugandan cabinet, clarifies what constitutes the promotion and funding of “unnatural” acts. This could inhibit prospective donors from supporting gay rights groups for fear of official retribution.

The U.S. and other donors have cut funding to Uganda in protest of the bill, known as “The Prohibition of Promotion of Unnatural Sexual Practices Bill.” Political observers have opined that the pressure from Western governments not to further criminalize gay people will ultimately prevent the bill’s passage.

Meanwhile SMUG continues to assert the essential humanity of Ugandan LGBTs. Mugisha’s plea resonates here, but may be lost in the din Lively and his followers have created: “We are not child molesters. We are not disease spreaders.  We are human beings who love and want to be loved same as you."