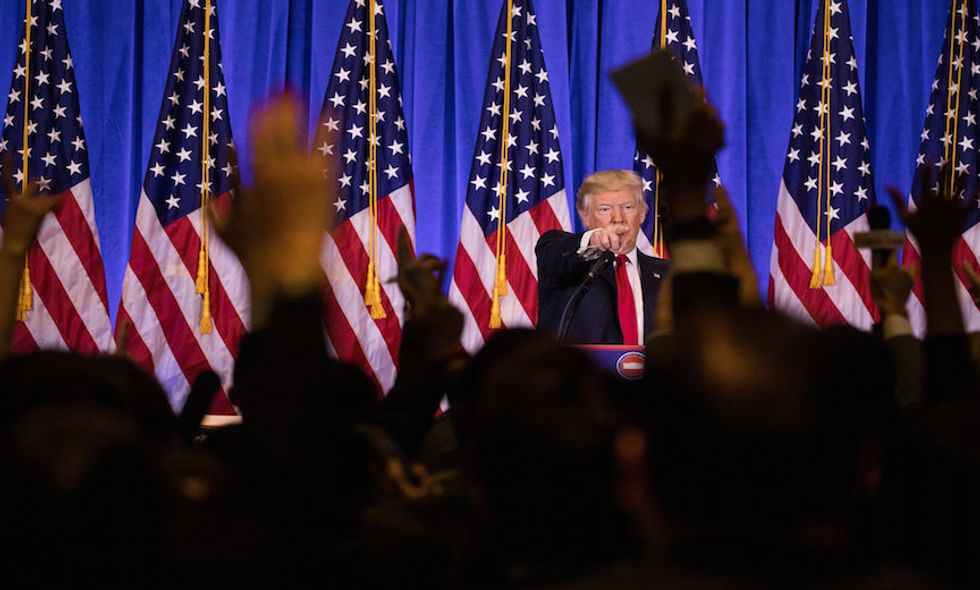 "Your organization's terrible." That was President-elect Trump’s response to CNN's Jim Acosta in today’s press conference, the first in over 160 days. "I'm not going to give you a question, you are fake news," he added.

Trump took aim at CNN because it had reported Tuesday that the heads of U.S. intelligence had briefed the President-elect and other top officials on purported claims by Russian agents that they possessed “compromising personal and financial information” on Trump. CNN stated that the allegations were summarized in a two-page memo based on reports by a former British intelligence operative.

In apparent retaliation for the story, Trump refused outright to permit even a question from Acosta.

Notably, CNN never published the unverified report that underlay the two-page summary, in stark contrast to Buzzfeed’s controversial decision to publish it. CNN later responded to Trump in a public statement defending the way it handled its reporting: “We are fully confident in our reporting. It represents the core of what the First Amendment protects, informing the people of the inner workings of their government; in this case, briefing materials prepared for President Obama and President-elect Trump last week.”

Trump suggested that someone had fabricated documents describing Russia obtaining compromising information about him. He said “sick people”–his “opponents”–had assembled the documents, and “garbage” “fake news” media outlets had disseminated them. He rejected the documents' claims of contacts between his campaign and Russia, and denied the allegations of his compromising behavior in a Moscow hotel. He said he always warned people traveling with him about cameras in foreign hotels and that in any case he is “a germaphobe.” As he did earlier in the morning via Twitter, during the press conference Trump attacked intelligence agencies for the leak of the so-called “fake news” to the public. “I think it was disgraceful that the intelligence agencies allowed any information that turned out to be so false and fake to get out. Just like Nazi Germany (...) I think it’s pretty sad when intelligence reports get leaked out to the press. It's also illegal,” Trump declared.

On the subject of Russian interference, Trump shifted his long-held position. “Russia hacked the DCN and Clinton campaign," he admitted. He had initially disputed this conclusion, calling the claims of the US intelligence chiefs regarding Russian interference in the election process, a "witch-hunt" and "fabricated." "As far as hacking," he said, "I think it was Russia, but I think we also get hacked by other countries, other people.? Trump then cited the vulnerability of the DNC’s systems while claiming the RNC was less exposed.

On Putin, Trump responded that if the Russian president likes him, it should be considered "an asset, not a liability," asking rhetorically about his defeated opponent: "Do you honestly believe that Hillary would be tougher on Putin than me? Does anybody believe that?"

Asked whether he or his campaign team had ever been in any kind of contact with Russia, Trump repeated his position that he has no loans or business in that country.

Trump also asserted that he is not subject to a ban on conflicts of interest, at any level. His lawyer spoke on his behalf, describing a "wall" to be erected between President Trump and the Trump Organization, which is to be managed going forward by Trump’s sons. Among the details provided, the Trump Organization would turn over any hotel revenues derived from foreign governments to the US treasury.

Asked about his tax returns, Trump said they were still under audit (a fact which the IRS has repeatedly declared is no barrier to disclosure), but asserted that "only reporters" are interested in seeing them.