Former President Donald Trump's fundraising efforts are generating mockery and criticism yet again, this time for a new "perk" of donating to his Save America PAC.

Save America, along with the Republican National Committee and a host of other GOP fundraisers, frequently exploit the near-universal adoration of Trump among Republican voters—an adoration that often mandates unconditional loyalty and the mindset that so-called patriots are at war with their Democratic neighbors.

Inundating these supporters with incessant text messages and emails, the solicitations shame subscribers as "defectors" for not donating, or for not donating enough, and promises that Trump will see their name on a list of his top supporters if they shell out more dough.

Now, Trump's PAC is peddling "Trump Cards"—red and gold identifiers that resemble a credit card with Trump's signature—for his supporters to identify themselves. 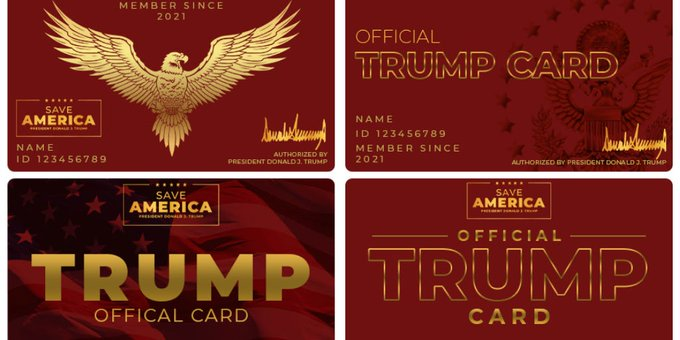 The fundraising email announcing the cards asks recipients to vote on which of four designs they'd like to see be circulated:

"We recently met with the President in his Florida office and showed him four designs. Originally we were planning on releasing just one design, but when President Trump saw the cards on his desk, he said, 'These are BEAUTIFUL. We should let the American People decide - they ALWAYS know best!'"

While most of the options were fairly standard, one in particular stood out as Trump's critics associated the Trump card eagle with the Nazi Party eagle that rose to prominence in the 1920s and continues to be used by neo-Nazis long after World War II.

The comparisons were instant.

The cards were ridiculed across social media.

It's unclear when the Trump cards, which can't be used as currency, will be distributed.