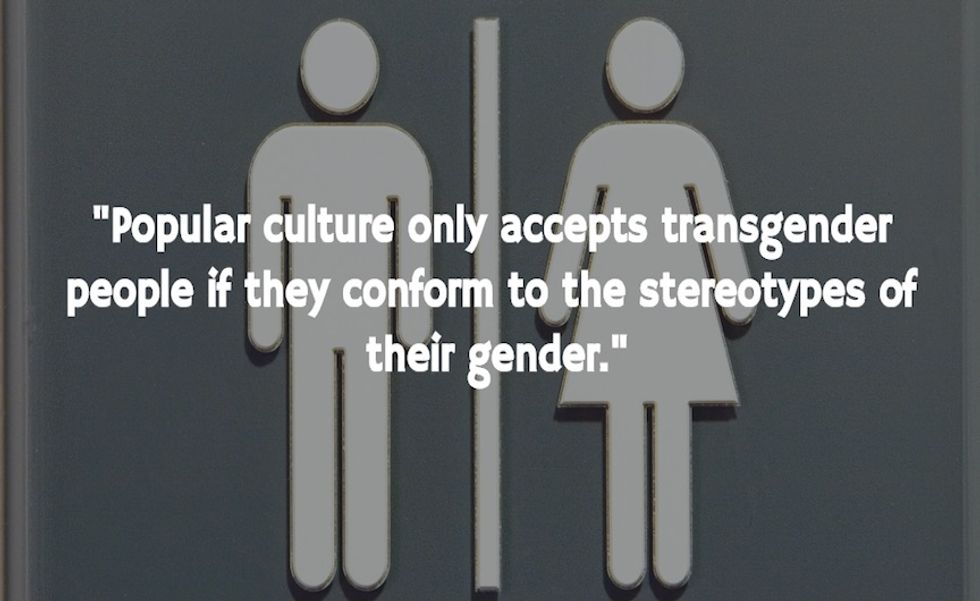 Popular culture appears to have moved quickly to embrace transgender celebrity. Transgender actors, runway models, and reality television stars abound, and actors portraying transgender characters have received a haul of television and film awards. There is, it appears, money to be made from rising transgender stars.

But despite the speed of this bandwagon, it ignores an uncomfortable fact: Only transgender celebrities who “pass” make it into the mainstream. "Passing" privilege illustrates the hypocrisy of our popular culture, which only welcomes a few while pretending to welcome all.

We saw this in pre-Civil Rights America. Black Americans with lighter skin and straightened hair enjoyed more socio-economic privilege than their dark-skinned and textured-hair counterparts. Those who could “pass” for white were given more opportunities, better employment, housing and education. Still, they tiptoed through such an existence, vulnerable to anyone who might call out their blackness, conflicted about having to disassociate from family and friends to maintain their status. Echoes of this resound today.

Within the trans community, "passing" means conforming to the stereotype of gender. The more like a woman a trans woman appears, the fewer hackles are raised. As a result, American popular culture can claim to be progressive and tolerant of trans persons, yet ostracize those who are gender nonconforming.

Similarly, must a transman sport suits, ties, short hair and embrace male-dominated pursuits to be welcomed? Is it acceptance if the culture only embraces transpeople

who represent themselves as an idealized or quintessential version of their gender?

The average cisgender person today is likely aware that some people are born with physical sexual characteristics that do not represent their gender, and may, to varying degrees, accept that a transperson is “trapped in the wrong body.” But what if a transperson does not seek surgery? How does the narrative of the “good transperson” play out when the individual transition to womanhood is unconcerned with eliminating facial hair or altering her voice? If a transman chooses to retain his reproductive function in order to birth and breastfeed offspring, does this invalidate his experience?

The High Cost of Acceptance

Society holds transpersons to idealized (and often misguided and uninformed) notions about how to be trans. For those unwilling to conform to a prescribed version of femininity or masculinity, many may question whether they are transgender at all. For transwomen, that often means daily upkeep of facial and body hair grooming, full makeup, styled tresses, dresses, cleavage, skirts and high heels -- the full picture of a pretty, well put-together lady. Some transmen may feel pressure to “butch it up,” by working out to achieve masculine muscles, or to grow substantial facial and body hair. That amounts to sizable maintenance and startup costs, to say nothing of the financial and emotional costs of gender confirmation surgery (GCS).

well, if they are choosing to reproduce. Both hormones and GCS surgery are difficult to obtain even when insurance covers them--and it rarely does. As a consequence, “passing” has also become an issue of privilege.

Society remains, however, fixated on these surgeries. Many transpersons feel pressure to at least pretend to their communities that they want surgery. “I’m a minority in the trans community,” says Lauren Hennessy, a transgender male who elects not to pass. “I think that's important, too. You shouldn't have to pass.” The fixation with surgical status goes beyond likeability. In many places, the right of trans people to change legal documents, such as driver’s licenses and other forms of identification, depends on transition surgery. This means that unless transpersons undergo costly surgery, they cannot legally be classified as their true gender. It also means that each job, loan, college application, voter registration or medical form outs them to potential employers, lenders and care providers. This could open the door to discrimination against transpersons without any real recourse.

The popularity of shows like Sense8, Transparent, and Orange is The New Black demonstrate that, as transgender celebrities gain exposure and become household names, they, like other celebrities, put their private lives under scrutiny. When Katie Couric asked Carmen Carrera and Laverne Cox on live television if either woman had had genital surgery, Carrera and Cox deftly corrected the host’s overstep. Couric was quickly and firmly told that the question was inappropriate and rude. However, Couric’s question is one that over 41% of transgender people report being asked frequently by everyone from employers to strangers. Unfortunately, the takeaway was not “mind your own business,” but rather that asking about a transperson's genitals is a normal thing to do, so long as you do it under the guise of “support.”

There is thus a certain insincerity behind the interest, awareness and acceptance of the trans community. If it is truly the case that only those privileged and wealthy enough to “pass” are worthy of the cisgender-dominant culture’s praise, then how far have we really come? While it remains revolutionary that highly visible and influential transgender people are now celebrated, this is at best conditional acceptance: Popular culture supports only the Good Transperson, the one who acts as a walking, talking, informational pamphlet to satisfy the public's

often lurid curiosity. The Good Transperson benevolently answers deeply personal questions from total strangers, making everyone comfortable while barely reminding them of their own marginalized social position. The Good Transperson satisfies the public’s voyeurism while simultaneously not threatening established norms of femininity or masculinity.

Still More Work to be Done

Even while society professes its acceptance, near weekly, horrific reports of yet another beaten or murdered transperson continue. To date, nearly two dozen transwomen in 2015 have died due to violence directly related to their gender. But the media isn’t interested, happy to applaud the clothing company that recently featured trans models in its advertising rather than report on the violence. The latter regularly makes the rounds of news networks and Twitter. Yet there remains little mainstream discussion of trans rights, trans safety, or trans-related public and social health issues.

Our culture has created media darlings of trans celebrities, then congratulates itself on its open-mindedness towards those that pass. Few have raised the harder questions of exploitation and tokenism. While we continue to profess acceptance and tolerance, when it comes conditioned, it may be smaller progress than we like to admit.