South Korea’s beauty standards are so impossibly high there may be only one way to achieve them — surgery. 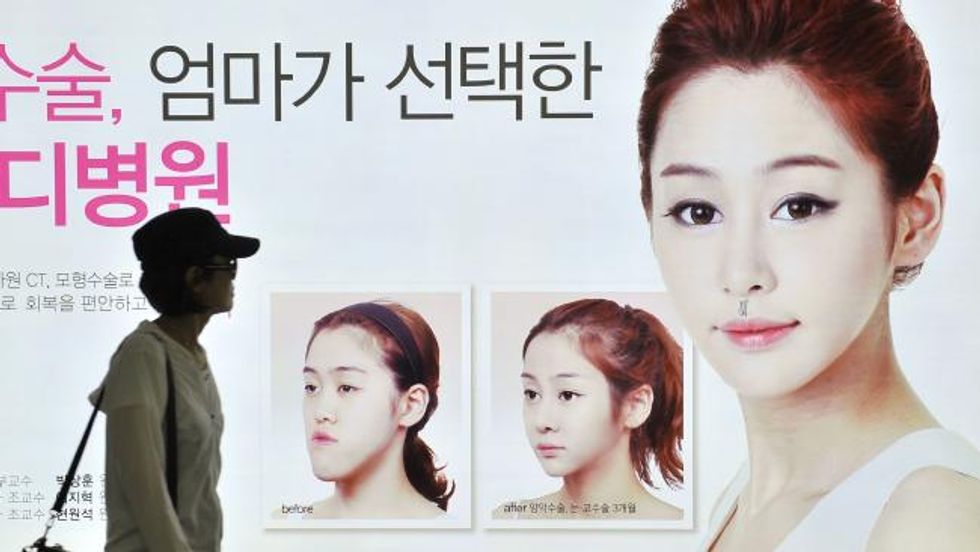 Looks aren’t everything, but they can make a big difference — and not just in romance, but in your career as well. “Koreans are obsessed with how we look,” said 19-year-old Seoul Woori, who energized her job search with the help of a nose job and eyelid lift. “Before my surgery, if I had 10 job interviews, I wouldn’t get any calls back. But now, I get a lot of calls.”

That’s why many parents in South Korea consider plastic surgery a normal part of preparing their children for adulthood. It’s even become a typical high school graduation gift.

In no country is perfection more possible — and impossible to resist — than in South Korea. South Korea is known as the plastic surgery capital of the world, and 20 percent of Korean women (as well as many men) have had plastic surgery (although the United States boasts the most procedures per year, according to the International Society of Aesthetic Plastic Surgery).

The most popular procedure is known as double eyelid surgery, or blepharoplasty, which is performed to eliminate the typical creaseless eyelid most Koreans are born with, creating a more Caucasian-looking eyelid and making the eye look bigger. Many Korean parents consider plastic surgery a normal part of preparing their children for adulthood, and this procedure has become a typical high school graduation gift. It costs between US $1,000 and US $3,000 in South Korea.

“Korea is a very competitive society and in the job market, a beautiful face is kind of a great weapon, because beautiful people are always chosen first,” said Dr. Man Koon Sun at the JW Plastic Surgery Clinic in Seoul.

The practice has become associated with “Gangnam Style” or K-Pop culture, which began with Korean pop music and has become a huge force in the country’s entertainment world and spread around the world. Part of the K-Pop look is an aesthetic that borrows from anime drawing style. Faces are wide-eyed and babyish, with a touch of Caucasian appearance within a contemporary Asian look. Teenagers absorb these new beauty standards through popular music videos.

In addition to double eyelid surgery, Koreans are also signing up for jaw-slimming surgery, or V-line surgery. This procedure creates a desirable, narrow jawline (as opposed to a more natural round face) by shaving the mandible using oscillating saws or by breaking and then realigning both jaws. Patients can take six months to recover from the painful procedure, which was initially developed to correct facial abnormalities.

“It's a complex, risky procedure. You could have permanent numbness, and there have been cases where people have died from this operation,” said Dr. David A. Koslovsky, a maxillofacial surgeon at Columbia College of Dental Medicine.

Less invasive is aegyo sal (“eye smiles” or “cute skin”), in which fat is injected under the eyes to create a babyish appearance.

Despite the fact that these surgeries radically transform their appearance, celebrities have rarely discussed them — until now. The K-Pop group Six Bomb has released a music video

that shows the before and after images of the four members’ surgery journeys. The women had "almost every kind of surgery that could be done on a face" plus breast implants. In the video for “Becoming Pretty,” the group visits a surgery office, dances with bandages on their faces, and compare before and after photos.

"We all wanted to get some surgeries done to look prettier... and thought, 'Why not perform a song about it instead of trying to conceal it?’” said lead singer Dain.

While plastic surgery isn’t openly discussed, many young Koreans feel intense pressure to conform to the new standard of beauty. Indeed, their future success may depend on it in a society where many job applications require a photograph. Surgery tourism is a growing business, as Seoul’s many plastic surgeons seek clients beyond their own small population. Surgery tourism has been especially popular with Chinese travelers; in 2014, 60,000 Chinese tourists had plastic surgery in South Korea, up 45 percent over the previous year.

The country’s national fixation with plastic surgery began after the Korean War, when the American occupational forces offered to provide free reconstructive surgery to maimed war victims. David Ralph Millard, the chief plastic surgeon for the U.S. Marine Corps, is best known for his groundbreaking with on children with cleft palates, but he also perfected the blepharoplasty during his time in Korea, working on burns victims as well as people who wished to change their appearance for cosmetic reasons.

Critics say that the K-Pop look favors European features with its emphasis on “Occidental” eyes, and that this surgical racism overlooks the natural beauty of Asian people. Backlash against plastic surgery is growing; in 2013, the Miss Korea beauty pageant contestants were criticized for looking too similar — too many of them had received the same procedures from the same doctors. A reality TV show called “Back to My Face” follows regret-filled people through a surgical journey to get back the face they had been born with, and surgically changed.

Others contend that South Korea’s beauty obsession masks a troubled picture for women’s status in the country. Although South Korea has the highest rates of young people attending college of any OECD country, it rates near the bottom for female equality. The country has seen skyrocketing rates of sexual violence in recent years, as well as stalking, domestic violence and murder.

However, men aren’t immune from the pressures of beauty standards. An increasing number of South Korean men are going under the knife to look good too. In 2010, 15 percent of South Korean men opted for cosmetic surgery, and 44 percent of male college students were considering it. For those who can’t quite commit to permanent change, there’s always makeup for men — South Korea’s other booming beauty business.