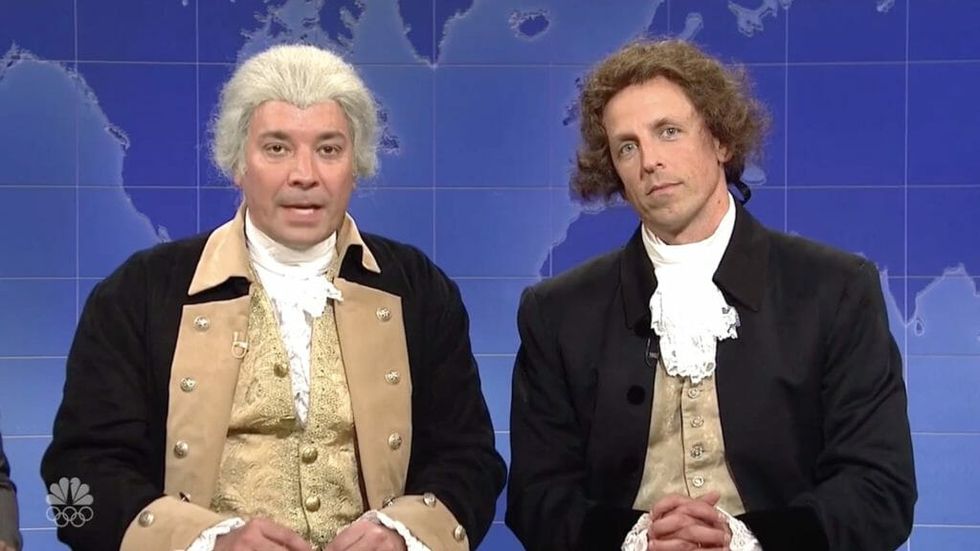 Tina Fey appeared on yesterday's edition of Saturday Night Live's special summer "Weekend Update" episode to comment on the violence which erupted over the weekend at the "Unite the Right" rally in Charlottesville, Virginia, and President Donald Trump's response.

“I have nothing but fond memories of my time there,” Fey, a 1992 graduate of the University of Virginia, said to Weekend Update co-anchor Colin Jost while wearing a sweater emblazoned with the school's logo. “I graduated a virgin and I still liked it. That's how good the architecture is down there.”

“So it broke my heart to see these evil forces descend upon Charlottesville,” she continued. “And then our president, Donald John Trump, and I don’t think enough people talk about what a stupid, jackass name that is. Whatever, he gets away with it because he’s gorgeous. Anyway, Donny John comes out and he says that he condemns violence ‘on many sides,’ on many sides, Colin. I'm feeling sick because, you know, I have seen Raiders of the Lost Ark and I wasn't confused by it. No, Colin, Nazis are always bad, I don't care what you say.”

Of the possibility of another alt-right rally in New York's Madison Square Park, Fey said, “Part of me hopes these neo-Nazis do try it in New York City and get the ham salad kicked out of them by a bunch of drag queens. Because you know what a drag queen still is? A 6'4" black man.”

“But, at the same time, I don't want any more good people to get hurt,” she added. “I know a lot of us are feeling anxious and asking ourselves, what can I do? I’m just one person, what can I do? I would urge people Saturday, instead of participating in the screaming matches and violence, find a local business you support, maybe a Jewish run bakery or African-American run bakery.”

She then started to eat cake.

“The next time when you see a bunch of white boys in polo shirts screaming about taking our country back and you want to scream, it's not our country, we stole it,” she said with a mouth full of cake. “We stole from the Native Americans. And when they have a peaceful protest at Standing Rock we shoot at them with rubber bullets, we let you chinless turds march the streets with semi-automatic weapons.”

Fallon and Meyers played George Washington and Thomas Jefferson respectively; the two former presidents "rose from the dead" to defend themselves against Trump's comparison of them to Robert E. Lee. (The removal of the Confederate general's statue sparked the demonstration by white nationalists.)

“About this whole Robert E. Lee thing, I'm nothing like that guy,” Fallon as Washington said. “I created this country, he tried to tear it apart. I rebelled against England, he rebelled against America.”

“Right, that was bad, that was wrong,” Washington said.  “But if you want to talk about owning slaves, you should really talk about Thomas Jefferson.”

Then Meyers as Jefferson arrived, prepared to defend his honor.

“Whoa, whoa, whoa, you’re gonna throw me under the carriage like that? You’re going to make me the slave guy, really?” he told his fellow former president. Come on! What more do you want? You are the one on the quarter. I'm on the nickel and two dollar bill, joke money! ... Look, we’ve all done bad things. But the difference between us and Robert E. Lee is that we also did good things, like I wrote the Declaration of Independence,”

“Not to be a jerk, but I won my war,” Fallon said as Washington.

“Yeah, and I’m sorry, Robert E. Lee, but I prefer generals who win wars,” Meyers added as Jefferson, to much laughter.