Scientists Believe Blood From the Young Can Regenerate the Brains of the Old, and They're About to Test It on Humans 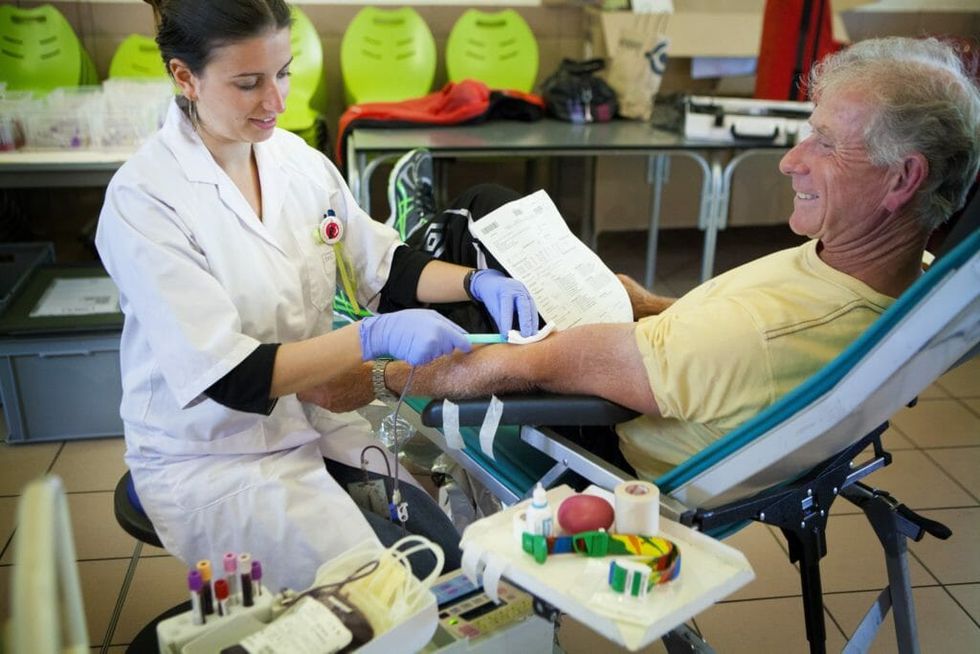 Building on previous research into aging brains,new research conducted at University of California, San Francisco (UCSF), published in the journal Cell, has discovered that the blood of the young can regenerate the brains of the old. One day, this might enable the creation of therapies to treat age-related diseases such as Alzheimer’s. However, before you go looking for a teenager to harvest blood from, keep in mind that the research has only been tested in mice. However, there is aclinical trial underway by a Monterey, California-based startup known as Ambrosia, where you can attempt to young-down your brain with youthful blood transfusions for a cool $8000.

The UCSF researchers, led by neurobiologist Saul Villeda, drew upon the effects of a recently discovered cellular enzyme known as Tet2 (ten eleven translocation methylcytosine dioxygenase 2), an epigenetic regulator, which makes chemical annotations to parts of DNA that change the activity of many different genes, including some that help prevent cognitive decline in the aging brain. Many of the genes it marks are indicated in increased risks of common age-related health conditions (which also are common killers), such as cancer, cardiovascular disease, and stroke.

As we age, our numbers of Tet2, and a related enzyme, 5-hydroxymethylcytosine (5hmC), decline, decreasing our ability to create new brain nerve cells, which may be partially responsible for our cognitive declines as well.

The researchers were able to demonstrate that Tet2 “offsets age-related neurogenic decline and enhances cognition in the hippocampus of adult mice,” the study authors wrote.

In one of their experiments, the hippocampi of the middle-aged mice showed improved memory and learning connections after an infusion of young mouse blood.

The hippocampus is a small but important brain structure in both mice and humans that plays a key role in forming types of memories, such as recollection and recognizing spatial patterns. “That’s what you need to use when, for example, you try to find your car in a parking lot or navigate around a city without using your GPS system,”said Tony Wyss-Coray, PhD, who worked on early iterations of this research, and is a professor of neurology and neurological sciences at Stanford.

According to a Stanfordreport on the research, “Studies have found, for instance, that a veteran London cab driver’s hippocampus is larger than it was when the driver was first hired, and larger than the average person’s.”

The hippocampus is among the most vulnerable of the brain structures to aging. “In dementias such as Alzheimer’s disease, this hippocampal deterioration is accelerated, leading to an inability to form new memories,” the Stanford researchers wrote.

“We know that detrimental anatomical and functional changes occur in the hippocampus as mice and people get older,” said Villeda. “This is just from natural aging. We’re all heading in that direction.”

Previous experiments done by Wyss-Coray, Villeda and other colleagues showed that exposing older mice to the blood of young mice made their brains produce more new nerve cells as compared to the brains of old mice who were only given blood from other old mice. Even more compelling, when young mice were given blood from old mice, it had the opposite effect, slowing nerve-cell production, and impairing the young mice’s ability to navigate their environments.

The earlier research did not test the effects of young mouse blood on the older mice’s behavior. This time, the UCSF researchers assessed the mice for changes within nerve circuits, within individual nerve cells, and looked for noticeable changes in the mice’s learning and memory.

To test the effects of young blood on old, the team used a process known as parabiosis. They surgically connected the circulatory systems of a pair of mice, one relatively young (around 3 months) to a middle-aged mouse (around 6 months) or to an elder mouse (approximately 18 months).

Then they used designer viruses that act as carriers and, when injected, cause an over-expression of Tet2 in the hippocampi of mature adult mice. This boost of Tet2 increased this epigenetic DNA tagging, which made older brains behave more like younger brains in terms of cellular activity in the hippocampus. While these mice did not perform much differently from untreated mice on most of the tests of learning and memory, it did improve their ability to remember where they had previously received mild electrical shocks and to avoid them.

Next, to find out if the loss of Tet2 in aging was directly linked to cognitive decline, the researchers used a technique called RNAi—where RNA blocks gene expression—to block Tet2 activity in the hippocampi of young adult mice. When Tet2 reduced, these brains created significantly fewer new neurons. Also, these animals performed much worse – mimicking aged mice – on learning and memory tests.

Villeda was blown away by the results. “This was amazing because it’s like improving memory in a healthy, 30-year-old human,” Villedasaid. “I always assumed that because there are no overt cognitive impairments in middle-aged mice, we wouldn’t be able to improve their brain function, but here we see that, no, you can improve cognition to make it better than normal.”

The study's lead author Geraldine Gontier, PhD, a postdoctoral researcher in the lab, from UCSF, was similarly amazed and said she had to repeat the experiment just to believe the results were real.

“This finding is exciting on many levels,” Gontiersaid. “I’ve spent my entire PhD and now my postdoc trying to understand how the brain ages and how can we reverse it. And in this study, we find that one molecule, Tet2, is able to rescue regenerative decline and enhance some cognitive functions in the adult mouse brain.”

Despite the astonishing results, Wyss-Coray pointed out that this is not an earth-shattering study design. The scientists simply compared older mice’s performance on standard laboratory tests of spatial memory after these mice had received infusions of plasma (the cell-free part of blood) from young versus old mice, or no plasma at all.

“This could have been done 20 years ago,” said Wyss-Coray. “You don’t need to know anything about how the brain works. You just give an old mouse young blood and see if the animal is smarter than before. It’s just that nobody did it.”

Of course, they still have questions. They are not clear on how, precisely, Tet2 levels improved learning and memory in the brains of the mice, or, more importantly, if such changes will translate to humans.

In fact, researchers aren’t even sure if the existence of adult neurogenesis (regrowth of neurons) in humans is even possible. However, Villeda believes neurogenesis is just one aspect of the brain’s regenerative abilities, and probably not the only one impacted by altering Tet2 levels.

However, it’s worth noting that a previous study from 2016 tested the blood of human teens (aged 18 or older) on aged mice with similarly promising results.

In that study, researchers injected the blood of healthy 18-year-olds into 12-month-old mice –late middle age—which can be compared to approximately 50 years old in human years.

Over the course of three weeks, twice a week the mice were given injections of human blood plasma – the liquid part of blood.

Then, scientists from Alkahest, a California-based biopharmaceutical company compared the behavior of the animals who had received the teens’ blood to control groups of three-month-old and 12-month-old mice – none of whom had received the plasma injections.

The mice with the young blood acted younger, engaging in behaviors such as running around in open spaces.

In addition, these blood-fueled mice demonstrated improved memory when researchers put the treated mice in a device called a Barnes maze, a tool for measuring rodent spatial learning and memory.

Older mice don’t perform very well in the Barnes maze, due to weak memory, but the treated older mice did as well as young mice.

Still, until and unless a study can be designed on actual humans, or on human brain models, researchers can’t be sure that the results will translate to human brains, though such a result could hold potential for the development of a new class of anti-ageing therapies.

At the very least, Villeda said, “We’ve shown that at least some age-related impairments in brain function are reversible. They’re not final.”