Some Say Vaping Is the Healthy Alternative to Smoking, But There Are Risks to Vaping as Well 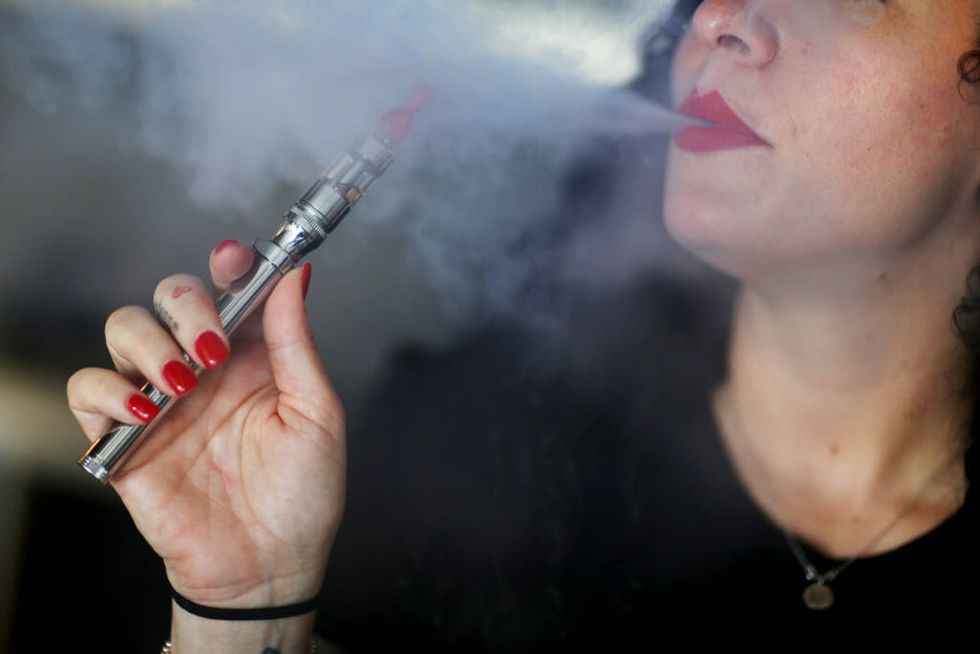 MIAMI, FL - APRIL 24: Julia Boyle enjoys an electronic cigarette as she waits for customers at the Vapor Shark store on April 24, 2014 in Miami, Florida. Brandon Leidel, CEO, Director of Operations Vapor Shark, said he welcomes the annoucement by the Food and Drug Administration that they are proposing the first federal regulations on electronic cigarettes, which would ban sales of the popular devices to anyone under 18 and require makers to gain FDA approval for their products. (Photo by Joe Raedle/Getty Images)

Cigarettes can be one of the most difficult addictions to quit, asaddictive as heroin. So the rise of vaping—inhaling vaporized nicotine through electronic “e-cigarettes”—has been touted as the perfect solution to help smokers quit, or to offer a less toxic alternative to smoking.

However, recent research has begun to look more closely at these allegedly reduced risks of vaping to health and finding them not as benign as they had initially thought.

For example, when we compare vaping’s health risks to smoking nicotine, certainly vaping is less toxic, but we’re talking degrees of risks. People who vape daily double their risk of heart attack as compared to those folks who don’t vape at all, according to theSociety for Research on Nicotine and Tobacco. Cigarette smokers who smoke daily have a triple risk of heart attack as compared to those who don’t smoke. So while you reduce your risk with vaping, you still put yourself at considerable risk.

Moreover, while vaping sounds like a great way to quit cigarettes, a certain percentage of people, known as “dual users,”end up both vaping and smoking, according toStanton Glantz, a professor of medicine at the University of California, San Francisco (UCSF) and director of its Center for Tobacco Control Research and Education.

He explained toBusiness Insider that people who both smoked and vaped every day have five times the risk of a heart attack as those who did not partake of either habit.

"E-cigarettes are widely promoted as a smoking cessation aid but for some, they actually make it harder to quit, so most people end up doing both," Glantz said. "This isthedominant use."

And e-cigarettes have a leg up on regular cigarettes in appealing to users; to make them more palatable, manufacturers offer a wide array of flavorings to sweeten them up. While these are tasty on the tongue, research has found that some of the chemical byproducts of these flavorings are harmful to human health. In 2009, the FDA issued a warning that an ingredient found in antifreeze, diethylene glycol, was also found in e-cigarette vapor. And in 2015, a study published in the New England Journal of Medicineshowed that some e-cigarettes contained formaldehyde, a carcinogen, as well as the heavy metals nickel and lead.

Further research at Lawrence Berkeley National Laboratory involvedtwo types of e-cigarettes,which run on batteries. Researchers tested two types of electronic cigarettes at different battery settings. The vapor produced included 31 harmful chemicals, including two possibly cancer-causing compounds that had not been previously found in e-cig vapor. The concentration of chemicals varied by the temperature at which they were vaporized. The higher the temperature of the heating coil, the greater the number of chemicals emitted.

"These heating coils, as currently made, seem to be leaking toxic metals — which then get into the aerosols that vapers inhale," Ana Maria Rule, author of a study on the subject published in the journal Environmental Health Perspectives, and an assistant scientist at the Johns Hopkins Bloomberg School of Public Health said in a statement.

Chemical carcinogens can damage genetic DNA, which can lead to mutations, and multiple mutations can lead to cancer.

"Advocates of e-cigarettes say emissions are much lower than from conventional cigarettes, so you’re better off using e-cigarettes," Berkeley Lab researcher and study co-author Hugo Destaillatssaidin a statement. "I would say, that may be true for certain users — for example, long time smokers that cannot quit — but the problem is, it doesn’t mean that they’re healthy. Regular cigarettes are super unhealthy. E-cigarettes are just unhealthy.”

Until recently, the key problem with e-cigs, as far as researchers were concerned, was the chemical makeup of the e-cigarette vapor and flavoring system as they react to heat. They had not thought that vaporized nicotine itself might be cancer causing. However, anew study published in the Proceedings of the National Academy of Sciences (PNAS) in 2018 foundthat the nicotine in e-cigarettes induced DNA damage in the lungs, bladder and heart of mice. It also proved to limit the lungs ability to repair and heal themselves. Two byproducts of nicotine, nitrosation product 4-(methylnitrosamine)-1-(3-pyridyl)-1-butanone, were also shown to cause the growth of cancerous tumors on cultured human lung and bladder cells, as well.

While e-cigarettes have been shown to beslightly safer to human health than regular cigarettes, it’s quite a stretch to suggest that they are safe. This has led to concerns about the most vulnerable group of people who are taking to vaping in greater numbers every year: teenagers. Attracted by the sweet flavorings, and lulled by the misinformation about the relative safety of vaping, more teens have begun to try vaping since 2011. In fact, according toa report published by the Centers for Disease Control and Prevention (CDC), more than three million teens had tried vaping in 2015.

Now UCSF’s research team has verified that teens who vape e-cigarettes have higher levels of the cancer-causing chemicals than nonsmokers, according toNBC News.

“The presence of harmful ingredients in e-cigarette vapor has been established‍; we can now say that these chemicals are found in the body of human adolescents who use these products,” the researcherswrote in a study published in the journal Pediatrics.

Public health agencies such as the CDC and the surgeon general's office are also concerned that vaping isa gateway for teens to smoke regular cigarettes, as the nicotine in vaping is not only addictive but sensitizes the brain to be more reactive to other drugs.

Indeed, according to theNational Institute on Drug Abuse, as of 2017, kids who use e-cigarettes are more than 30% more likely to go on to smoke regular cigarettes within six months than kids who don’t vape.

Moreover, a National Institutes on Healthreport suggests that cigarette smoking is often a gateway to other drugs, including marijuana, cocaine and even heroin.

Naturally, public health agencies are sounding alarm bells. "E-cigarette use among youth will begin kids on a lifelong addiction to nicotine and tobacco products," said the president of the American Lung Association.

In 2016, the Food and Drug Administration banned the sale of vaporizers, as e-cigarettes are called, to minors, in a similar way to how traditional cigarettes are regulated. Kids under the age of 18 can’t purchase anything considered to be "Electronic Nicotine Delivery Systems."

However, it’s still remarkably easy to purchase vape pens, and does little to stop kids from using those that belong to others.

In general, public health officials and scientists agree that more research needs to be conducted. Most of the existing research on e-cigs has been on what they call “cigalikes,” devices that most resemble regular cigarettes, with a disposable mechanism that is preloaded with the vaporizer liquid/nicotine.

However, daily vapers are more likely to use reusable devices that they can customize to their preferences. These are known as mods or “tank-style” devices which involve a battery and a mouthpiece, and may cause the most damage to health.

Researchers have their work cut out for them given that new types of e-cigarettes are being developed every day.

"Direct sampling from e-cigarette consumers rather than purchasing e-cigarettes from a store or company is thus needed to assess typically used devices," Rule wrote in her paper.