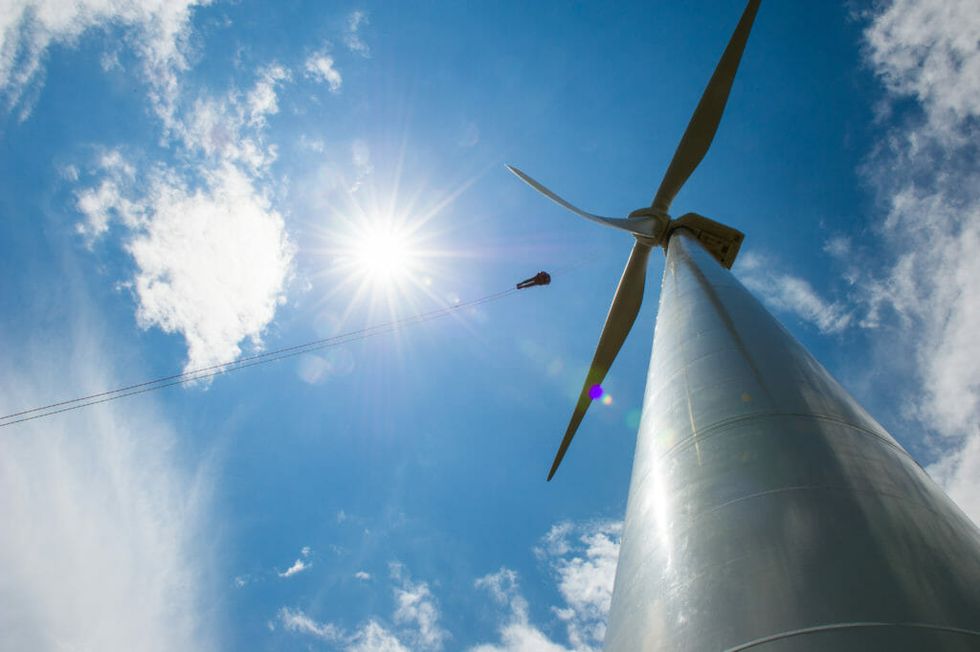 Renewable energy has been steadily expanding its market share over the past decade, and as technologies have improved and costs have come down, output has gone up — way up. The record-breaking test run of a new giant wind turbine in Denmark is another indicator that green energy is ready to become a dominant force in the global energy mix.

The new 9 MW prototype turbine, called MHI Vestas Offshore Wind, is a joint venture between Vestas Wind Systems and Mitsubishi Heavy Industries. The turbine is 722 feet tall, has 38-ton blades that are 263 feet long. In a December 2016 test on the coast of Østerild, Denmark, the huge turbine generated nearly 216,000 kWh in a 24-hour period, breaking the previous record for energy generation by a commercially available offshore wind turbine. That’s enough energy to power the average American household for 20 years.

“We are confident that the 9 MW machine has now proven that it is ready for the market and we believe that our wind turbine will play an integral part in enabling the offshore industry to continue to drive down the cost of energy,” said CTO Torben Hvid.

Vestas CEO Anders Runevad said that wind energy will only continue to grow. "Wind continues to increase its competitiveness in the energy space, and we take good advantage of that.”

Offshore wind investments in Europe hit 18.2 billion euro last year, according to statistics from industry body WindEurope, and covered more than 10 percent of the energy needed in Europe in 2016. Investment in offshore wind technology has tripled in the past five years.

Furthermore, that technology is rapidly changing. While much of the wind energy produced in Europe comes from massive turbines and large-scale wind farms, upcoming innovations will decrease the size needed to generate electricity. New smaller, quiet wind turbines are being developed for individual and small-scale use. Inergys, a French start-up supported by EU climate innovation initiative Climate-KIC, is making turbines that power individual buildings. In Britain, a company called NVT group has designed mini-turbines that attach to lamp posts and send the power they generate straight to the grid. Another mini-turbine concept resembles cottonwood trees with spinning leaves and branches that generate power. The researchers at Iowa State University who created it were inspired by cell phone towers designed to look like trees to bring a more aesthetically pleasing design to the urban environment.

While Europe, India and Asia expand their reliance on renewable energy, the market in the U.S. is waiting on the effects of President Trump’s promise to prop up the fossil fuel industry, combined with efforts by state lawmakers actively try to discourage the expansion of wind and other renewables.

Oklahoma’s governor has proposed a new 0.5 percent tax on every kilowatt hour generated by wind technology, making it the second state after Wyoming to tax wind energy. Wyoming is considering a bill that would outlaw renewable energy in the state. New secretary of state Rex Tillerson comes directly from a CEO spot at ExxonMobil.

The renewables industry is undeterred, however. Price parity between renewables and fossil fuels is rapidly approaching, and renewables promise growth potential and jobs development far greater than the fossil fuel industry. More U.S. citizens are already employed in solar energy than in oil, natural gas and coal combined, according to the U.S. Department of Energy's annual U.S. Energy and Employment Report. Trump has claimed that preserving jobs in coal country is a top priority — even though greater job growth could come from investing in renewables, especially in GOP red states that have abundant wind and solar resources.

In the end, money may trump nostalgia. Clark MacFarlane, CEO of Siemens Wind Power UK, said, “Trump’s core policy is more jobs. So why do anything to destroy American jobs, especially ones delivering low-cost energy?”