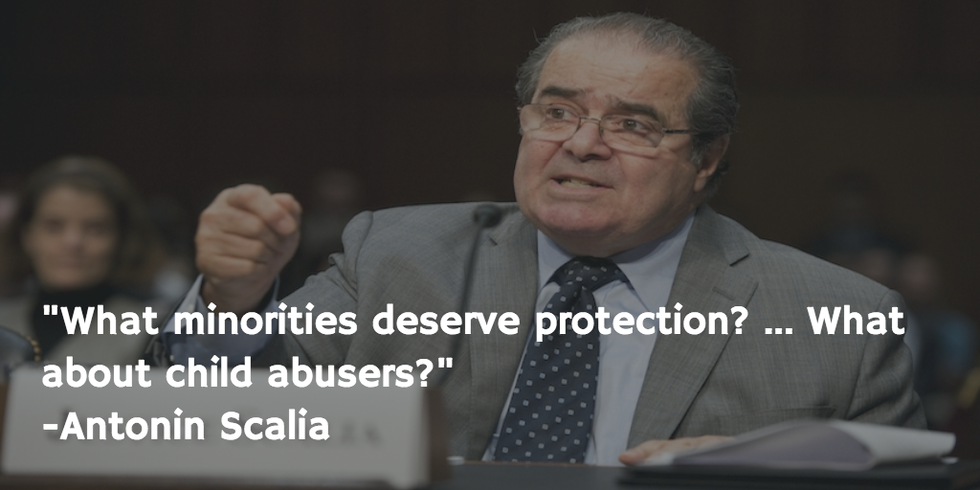 Supreme Court Justice Antonin Scalia has never held back when it comes to his brutally honest opinions. This time, he has unleashed his tongue on the Court’s historic decision on same-sex marriage last June. In a speech at Georgetown University’s Law Center on November 16, Scalia condemned what he sees as the overreach of Obergefell v. Hodges. His belief is that the expansion of minority rights should come through legislation and democracy, not through the courts. He does not believe that  the courts should decide which groups are “deserving minorities,” and suggested that child molesters could be protected by the same logic the Court used to rule on Obergefell.

The Justice’s fiery words drew criticism from LGBT and other civil rights activists; indeed, Scalia has a history of using inflammatory language to criticize policies and decisions. Comparing gay couples to “pederasts” (men who sexually abuse boys) is sure to add to the controversy.

According to Yahoo, Billy Corriher, a director of research at the Center for American Progress, responded, “Child abuse is something that is totally different. It's not about the adults. It’s about the victims of child abuse. There's no victim in same-sex marriage. I think it's insulting for gay and lesbian Americans.” John Green, editor of AmericaBlog, noted, “This is the kind of argument that wouldn’t even merit a dismissal had it come from anyone other than a sitting Supreme Court justice… For one, child molestation is a rather obvious harm, whereas consenting marriage is not. Additionally, the Courts have tests in place to define deserving minorities that continue to be improved upon precisely because deserving minority groups with histories of oppression tend not to fare well at the ballot box.”

Such tests have traditionally included whether the distinguishing factor is immutable (such as race, gender, or national origin), whether there is a history of discrimination against the group in question (for example, legislation based in animus towards the group), or whether the group is politically disenfranchised. Most legal scholars would argue that pederasts do not fall into any of these categories, while LGBTs do. Scalia’s personal opinions notwithstanding, the legality of same-sex marriage appears now well-settled after Obergefell, with opponents now seeking to chip away at its edges by arguing that “religious freedom” should permit individuals to refuse to sanction, participate or cater to same-sex wedding ceremonies.