From Heartbreak to History: How One Gay Spouse's Dying Wish Might Change the Law For All Time 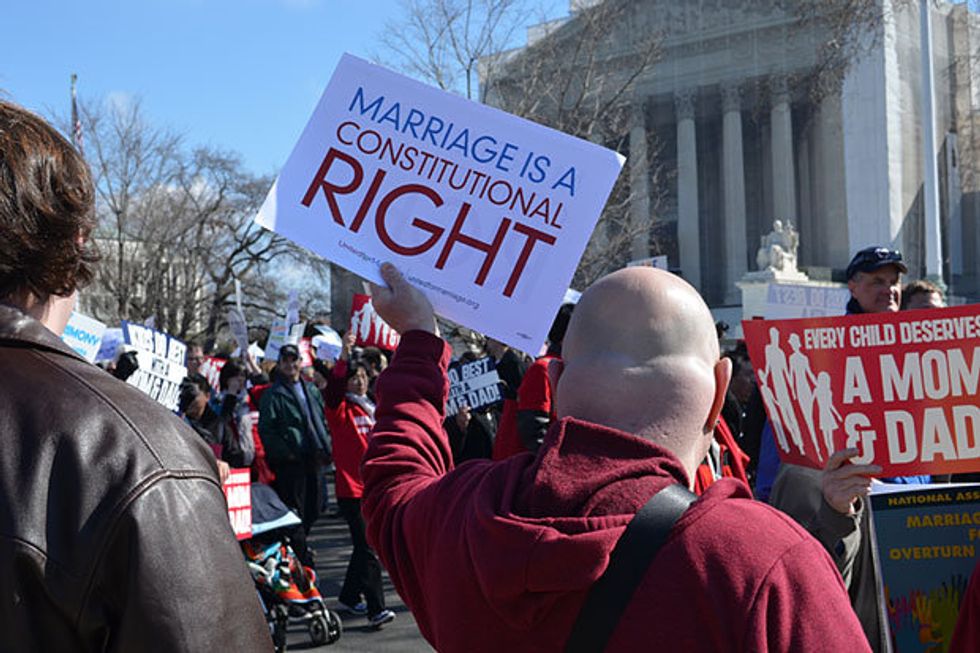 In just a few days, the Supreme Court will hear oral arguments in one of the most important civil rights cases in a generation: Obergefell v. Hodges. After more than 20 years of struggle for marriage equality in the US, gay rights advocates are hopeful that, one way or another, Obergefell will legalize same-sex marriage in all fifty states.

Marriage equality before the Court

Obergefell is one of four marriage equality cases before the Court. The other three cases, Bourke v. Beshear, DeBoer v. Snyder and Tanco v. Haslam, originated in Kentucky, Michigan, and Tennessee, respectively. Each of the four cases turns on one or both of two essential questions: whether state bans on same-sex marriage are constitutional, and if they are constitutional, whether states that continue to uphold their bans on same-sex marriage must recognize marriages performed in other states.

According to SCOTUSblog's Lyle Denniston, "When a final decision is issued, it will have the Obergefell v. Hodges title, simply because that case was the first to reach the Justices." But fate may have chosen Obergefell for reasons beyond mere clerical efficiency. The love story at the center of Obergefell v. Hodges is a heartbreaking tale of love, loss, and the simple desire for dignity in death.

Jim Obergefell and John Arthur had been together twenty years, but the couple wanted to wait to get married until their union would be legally recognized in their home state of Ohio. But they were running out of time. As the Los Angeles Times reported,

"[t]wo years ago, when the Supreme Court struck down the federal Defense of Marriage Act, [Obergefell and Arthur] began to reconsider. The fact that Arthur had been diagnosed with amyotrophic lateral sclerosis, or ALS, a fatal, crippling neurological disorder often called Lou Gehrig's disease after the baseball player, added “a much greater sense of urgency,” Obergefell said.

“With John’s death approaching, it just gave us more of an impetus and more of a desire to have our relationship validated and recognized,” Obergefell recalled. “We suddenly saw the opportunity to say ‘I do’ and have it matter from a legal and governmental perspective. But if John had not been dying from ALS, we still likely would have gotten married because after 20 and a half years together we wanted to be treated the same as other couples.”

The two decided to fly to Baltimore, Maryland and were wed on board a medical jet in July of 2013. Shortly after their marriage, and as Arthur's condition worsened, the couple wanted to ensure that the memory of their union would endure. So, they sought to guarantee that when he passed away, Arthur's Ohio death certificate would reflect his true marital status.

Though a federal judge had initially granted their request, and though Arthur's original death certificate acknowledges his marriage to Obergefell, the state of Ohio appealed the 6th Circuit Court's decision and won. What all that boils down to is this: The United States Supreme Court must now decide whether the state of Ohio can refuse to acknowledge Arthur and Obergefell's marriage and reissue Arthur's death certificate bearing the word "single."

Other Ohio plaintiffs who joined in the Obergefell case include another widower and newly single father of three whose husband died unexpectedly and whose death certificate does not reflect his marriage; several families with young children whose birth certificates may be revoked and reissued with the name of only one of their parents instead of both; and a family whose child has an adoption decree that continues to go unrecognized by the state of Ohio.

But the love stories and family struggles at the heart of Obergefell v. Hodges are not the only reason marriage equality supporters are hopeful for a favorable outcome. After all, same-sex couples have endured similar tragedies and indignities for decades; their anguish has, until now, failed to render a comprehensive constitutional decision in their favor. But this time, all signs suggest that the nation's highest court may be prepared to extend 14th Amendment protection to same-sex couples.

A compendium of state laws

First, here is what is at stake. As of today, 37 states recognize same-sex marriages, and more than 70% of Americans live in a state where same-sex marriage is legal. Marriage was legalized by court decisions in 26 of those states. States where the court's decision to ensure marriage equality was predicated on provisions in that state's constitution will not be affected by Obergefell. But states where the court's decision was based on the federal Constitution, however, could see marriage

The Court's recent decision not to stay a federal judge's order striking down Alabama's ban on same-sex marriage raised advocates' hopes for a favorable ruling on marriage equality. As Mark Joseph Stern of Slate.com reports, the Justices usually hold their cards a bit closer to their chests, so such signals are rare--and telling.

"Typically, the justices will stay any federal court ruling whose merits are currently under consideration by the Supreme Court. Under normal circumstances, that is precisely what the court would have done here. . . . After all, if the court ultimately ruled against marriage equality, the Alabama district court’s order would be effectively reversed, and those gay couples who wed in the coming months would find their unions trapped in legal limbo."

"But that is not what the court did here. Instead, seven justices agreed, without comment, that the district court’s ruling could go into effect, allowing thousands of gay couples in Alabama to wed. That is not what a court that planned to rule against marriage equality would do. By permitting these marriages to occur, the justices have effectively tipped their hand, revealing that any lower court’s pro-gay ruling will soon be affirmed by the high court itself."

Aside from being largely averse to stripping citizens of their civil rights once those rights have been recognized, the Court seldom chooses to issue a ruling and then immediately overturn the results.

Other considerations: Is the U.S. ready for this decision?

Second, the Justices give surprising weight to whether they believe the country is prepared for such a decision. When it comes to issues of great social and political import, the Court often chooses to walk softly, allowing popular support to grow or wane rather than forcing a decision upon a largely opposed public. For example, even Justice Ruth Bader Ginsberg--the Court's strongest and most consistent voice on women's rights--believes the Court moved too quickly when it issued its landmark decision in Roe v. Wade. According to Geoffrey R. Stone of the Huffington Post,

"Justice Ginsburg's objection is that, by issuing so bold and far-reaching a decision, the Court infuriated the opponents of choice and triggered a bitter and divisive response among the Moral Majority and conservatives more generally, a response that has polarized the nation to this day. Put simply, Justice Ginsburg argued that Roe v. Wade triggered a political "backlash" that not only poisoned American politics but also energized the resistance to abortion and thus undermined the very goals that Roe sought to achieve."

Although Justice Ginsberg may otherwise agree with the legal outcome of the ruling which significantly expanded women's reproductive freedom, she also believes that the Court did significant harm by imposing such a sweeping decision. Another example often cited is when the Supreme Court issued a ruling in Brown v. Board of

Education, a 1954 decision that invalidated laws segregating public schools but which met with fierce resistance from a defiant South. It would take far more than a Supreme Court decision to force that kind of social change.

In light of the social and political consequences of decisions like Roe and Brown, the Court might be hesitant to leap, but as Harvard Law School's Michael Klarman points out in his article for SCOTUSblog, this time may be different:

"[I]t is hard to imagine how the coming of same-sex marriage will affect the lives of opponents as directly and powerfully as critics of Brown and Roe believed those rulings affected theirs. For white southerners committed to the preservation of white supremacy in the mid-1950s, forced integration of their children with African Americans in grade schools was the end of the world as they knew it. Similarly, opponents of abortion regard it as murder; that critics of Roe are intensely committed to resisting its implementation and ultimately to overturning it is thus hardly surprising."

The country's relative calm in the wake of a virtual tidal wave of lower court decisions legalizing same-sex marriage, moreover, reinforces the notion that the Court's incremental approach has been successful. Despite recent flare ups, such as the Alabama's state Supreme Court's homophobic temper tantrum or Indiana's new "Religious Freedom" bill that led to calls for a nationwide boycott of the state, the social waters here have remained relatively calm. Michael Klarman writes that since the Court's decision to strike down a key provision in the Defense of Marriage Act (DOMA) two years ago, "most of the drama over this issue has dissipated. Few Court watchers any longer doubt that five Justices will support a right to marriage for same-sex couples."

Finally, even if we can expect a sharply divided vote, Justice Anthony Kennedy, seen as the key swing vote, has sided with the Court’s four more liberal justices in a celebrated line of cases that expanded civil rights for the gay and lesbian community. While some political commentators still hope that Justice Kennedy-- a Reagan appointee with federalist leanings-- will vote to uphold state's rights over the rights of same-sex couples, most observers believe the 78-year-old justice will seek to preserve and cement his legacy as a supporter of civil rights for gays and lesbians.

There is a possibility, albeit slim, that the Court's vote for marriage equality will be even stronger. If Kennedy votes to strike down the marriage bans, as expected, Chief Justice John Roberts may also add his vote to the majority, making the final tally 6-3 with Justices Scalia, Thomas and Alito dissenting.

Although it appears that the stars finally may have aligned for gay and lesbian couples who are anxiously awaiting the news, the Court is unlikely to issue a decision until late June, probably on the final day of the term. Perhaps then, the final wishes of John Arthur--that he simply be remembered as a man married to the love of his life, Jim Obergefell--will at last gain the full and equal respect of the state of Ohio and the nation.