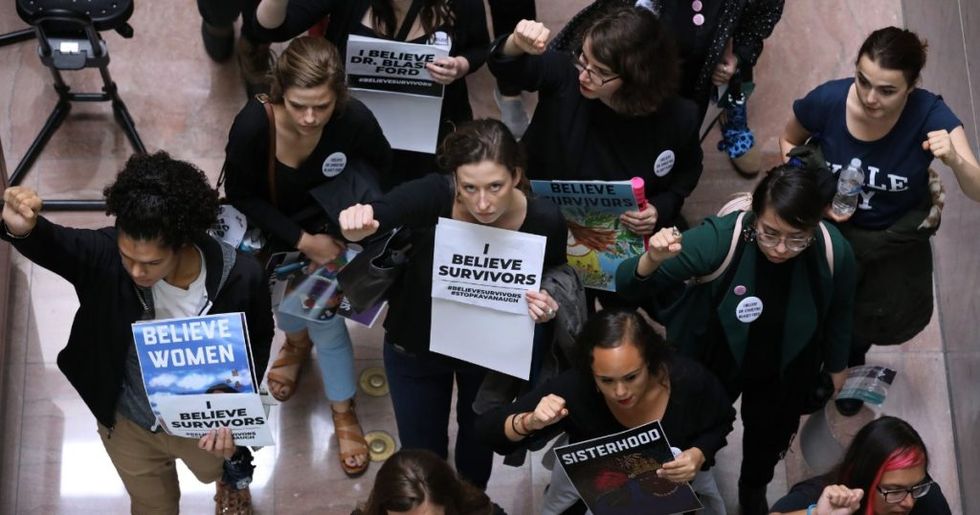 WASHINGTON, DC - SEPTEMBER 24: Hundreds of protesters rally in the Hart Senate Office Building while demonstrating against the confirmation of Supreme Court nominee Judge Brett Kavanaugh on Capitol Hill September 24, 2018 in Washington, DC. Hundreds of people from half a dozen progressive organizations, including students from Yale University Law School, protested on Capitol Hill for a #BelieveSurvivors Walkout against Judge Kavanaugh, who has been accused by at least two women of sexual assault. (Photo by Chip Somodevilla/Getty Images)

Students at Yale Law School staged a sit-in on Monday in protest of Brett Kavanaugh's nomination to the Supreme Court, which has become imperiled by multiple allegations of sexual misconduct against the judge, The Boston Globe reported on Monday.

Yale officials cancelled classes to accommodate a protest by law students opposed to the nomination of Judge Brett… https://t.co/mUiiBrL4Wj
— The Boston Globe (@The Boston Globe) 1537808035.0

Scores of people dressed in black flooded the halls of Yale, silently supporting the idea that accusations of sexual assault should be taken seriously and that Kavanaugh represents a ‘‘real threat’’ to the republic.

Some classes were canceled or rescheduled to accommodate the protesters, who as of Monday afternoon have the backing of the Dean of Yale Law School.

‘‘As dean, I cannot take a position on the nomination, but I am so proud of the work our community is doing to engage with these issues," Gerkin said, "and I stand with them in supporting the importance of fair process, the rule of law and the integrity of the legal system.’’

Gerkin added that dozens of faculty members urged a "fair and deliberate" confirmation process in a letter sent to the Senate Judiciary Committee.

Videos of the Yale protest appeared on Twitter Monday afternoon.

Over a hundred Yale Students are gathering in the halls of Congress in protest against corrupt Kavanaugh’s nominati… https://t.co/JPsvMWeZ8x
— Ricky Davila (@Ricky Davila) 1537813861.0

Protesters are demanding investigations into the multiple accounts of sexual misconduct of which Kavanaugh stands accused.

The protests come a day after a second woman, Deborah Ramirez, told the New Yorker that Kavanaugh drunkenly exposed himself and forced her to touch his genitals at a Yale party in the early 1980's. Some students traveled to Washington, DC to voice their opposition to Kavanaugh.

Students packed the area outside Senator Susan Collins' (R-ME) office. Collins has waffled on whether or not she would vote to confirm Kavanaugh.

Dozens of people protesting the nomination of Brett Kavanaugh to the Supreme Court have been arrested outside the o… https://t.co/sOlUVIX4QP
— The Boston Globe (@The Boston Globe) 1537805822.0

Last week, Dr. Christine Blasey Ford, a psychology professor, publicly accused Kavanaugh of attempting to rape her during a high school party in 1983.

Ford alleges that a "stumbling drunk" Kavanaugh pinned her down and tried to remove her clothing, and put his hand over her mouth when she tried to scream.

On Sunday, Michael Avenatti revealed he is representing a third woman who alleges she was gang-raped by Kavanaugh and other men at a Yale party during the same time period as Ramirez.

“I represent a woman with credible information regarding Judge Kavanaugh and Mark Judge,” Avenatti tweeted. “We will be demanding the opportunity to present testimony to the committee and will likewise be demanding that Judge and others be subpoenaed to testify. The nomination must be withdrawn.”

And on Monday, The Sentinel reported that a potential fourth accuser may be preparing to file a criminal complaint against Kavanaugh with local law enforcement.

Kavanaugh has fiercely denied all the accusations.